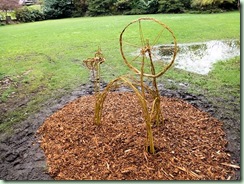 On Saturday T-Man and I participated in creating a living memorial for our friend who passed away in January. With the invaluable help of Sharon Kallis, an environmental artist who is really skilled at engaging the public in her work, a small group of M’s family and friends wove a slightly-larger-than-life-sized spinning wheel using basketry willow. Some of these stems will take root and leaf out adding greenery to the natural yellow of the willow. It’s not meant to be permanent (the hope is for about 3 years) but we’ll see how long it will remain intact. In the end though, it does remind us that life is wonderful and also fleeting so enjoy it while you can.

Going into this project I couldn’t imagine how it would work. My lack of a 3D imagination doesn’t help. Plus I’m not very good at basketry at the best of times since it usually takes more hand strength than I possess. Luckily there was a lot of help and direction to counter any lack of skill on our part! I really think the results are quite pleasing, if slightly wonky. Which just gives it more character, right? Click on the photo to see more detail. It was hard to get a good picture when the mulch is nearly the same colour. As you might be able to tell, the whole group got a little bit muddy! But at least the willow should be happy here.

Among her many other endeavours, Sharon is also involved in a project to begin a flax and dye plant garden on the site of a former tennis court right near the wheel’s spot. If you are local, do come along to Aberthau/West Point Grey Community Centre over the next few months and check out the progress and view the willow wheel. The area is around back behind the gardens and the wheel is close by among the trees. When summer dries out the damp location, it might be a nice place for a spin-in, don’t you think?

What else? I’ve been sorting my patterns and fabrics to get an idea of what I want to sew in the next while. Not surprisingly there’s a queue of about 25 garments ready to go! Yikes. Obviously I’ve been collecting up for quite some time, huh? Then yesterday I scrunch-dyed some linen/rayon fabric for Marcy Tilton’s Vogue 8876 dress. I used black Procion MX but the colours I got on the natural oatmeal fabric were really interesting murky blues, blue-greens and greys. I’ll try to get a photo before I cut into it. I’m always surprised by the LWI (low water immersion) technique which is why I use it so often. There is so little control over what you get!

Off to go try to plant some of my seedlings in the rather soggy garden. The weather is nice and the forecast is for sunshine mostly continuing for the next while. Gotta spend Earth Day with my hands in the dirt. That’s why it’s called “earth” day, isn’t it? Heh.

That is such a lovely memorial for you friend.

everything about the memorial is beautiful and heartwarming. thanks for sharing.

I concur. A beautiful memorial & I hope it sprouts all over!! And it should be even more interesting to have a dye garden close by. What a great idea.