Write That One Off

I just deleted a whole whiny post which included the stress that was induced by a combination of Ruby-the-iTouch who had a hiccup (which was resolved) and the Spectrum Study Group meeting that didn’t happen. Combine that with grumping about not being able to sew because any pattern needs days of fitting fun first and there’s not enough of the right fabric for the proposed garments or just something was not right. Blech. I have no right to kvetch when other people I know and love are having it much tougher right now. I’m blaming it all on a temporary case of the Whim-Whams. Done. Moving on now.

I have a Finished Object: 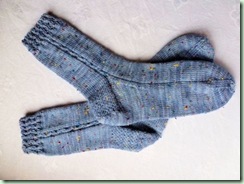 Pattern:  Elongated Corded Rib by Charlene Schurch, from Sensational Knitted Socks. I only used the stitch pattern, not the sock pattern. The socks are knitted using my own methods: 5” leg, modified eye-of-partridge stitch heel flaps (with 2-st purl edges), foot to 7” before toe dec.

Comments:  After knitting most of the legs in all-over rib pattern, I decided that I didn’t really like it and started over. I used the rib for the cuff and carried one repeat down each side to the heel. The 2-st purls kept going down the foot. I’m not especially happy with the way the pattern divided at the heel but it’s ok. I’m not really sure how I would do it differently.

I haven’t actually gifted these yet. Hopefully next week. As my great-uncle Tam would say: time’s a-wasting!

Meanwhile the Orange Aeolian Shawl looks like a sack of orange fuzz with beady sparkles: 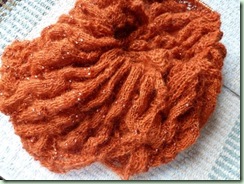 The rows are getting longer and longer and it takes great concentration not to make a mistake or drop stitches – which I’ve been doing with some regularity. It’s going to be spectacular though so I’m plugging away. 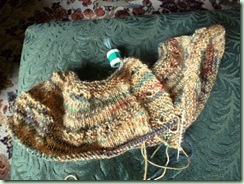 Yeah, it looks a bit rough right now but I’m pretty sure it’ll block out ok. The yarn is Confetti sock and hopefully with 2-100g balls I’ll have enough. The pattern is Ruby Tuesday by Ewa Durasiewicz and this is kind of a practise piece for the yarn I really wanted to use but was afraid I wouldn’t have enough. I like the straw yellow with green and dull red flashes. Reminds me of sun-bleached summer grass fields. The needles (size 3.75mm) are a bit large for thin sock yarn giving a rather loose hand to the knit but I was trying to size up from the fairly small one-size original pattern. And I wanted a stretchy drapey result anyway. We’ll see. If it doesn’t work I can always frog the thing.

If sewing is frustrating me, I can always knit, right? Or perhaps work on the slide show for my upcoming guild talk. I’ve barely started it yet. Time’s a-wasting!

eegads! I was going to do the same whiney post but thought I'd stop by to see you first. ahhh, I feel so much better. At least you're knitting. I've been going in and out of the studio with nothing to show for it but aggravation. For the past week I can't seem to settle on any particular pattern or fabric. I get as far as putting it all down on the table, even pinning it, but can't/ won't commit to cutting it out. Something just doesn't seem right about it. Anyway, I'm glad I'm not the only one who goes through such phases...