Everything Old Is New Again

It’s been a bit quiet around here mostly because I’ve been busy sewing. And walking. A lot. The sewing was the refashioning of the handwoven dress from 1997 which I promise to blog shortly. (I need one more photo first.) I did finish it on time and wore it last evening along with my Orange Aeolian Shawl to my weavers’ guild meeting where it was very well received. It wasn’t even the oldest garment there! It had stiff competition from a blouse that was over 20 years old and a skirt and top that were woven in 1987. Plus lots of lovely new garments and accessories. It was a really fun social evening with a potluck and door prizes. No need to ask. I didn’t win anything.

Besides the usual grocery runs, the walking included another jaunt downtown to my beloved Dressew. I needed some buttons for my latest not-quite-finished cardi and some thread. Of course that wasn’t all I bought! I’d been ignoring the bins of cotton yarn for the last few trips but this time I bought two colours. You know – before they run out completely. The stuff is dirt cheap at only $4.99 per 1+kilo cone. 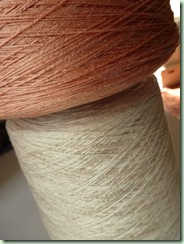 They referred to it as crochet thread but in my world it’s also great weaving yarn for placemats and tea towels. 10/3 cotton. The label also says it’s mercerised but it doesn’t seem very shiny. It doesn’t really matter. I need some new table linens in the worst way. But first I have to stop sewing new clothes and actually wind a warp. Erm…

I also got some fabric: 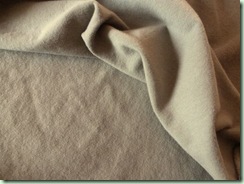 This is the same French terry stuff as my chocolate pants but in mint green instead. (Oh yum – mint chocolates!) It’s a lovely mid-weight and is stretchy but recovers well. Anyway it goes with lots of pieces in my wardrobe and is a lighter colour for a more summery look. I plan to make a similar pair of long and capri lengths, just like I did with the chocolate version. The fabric is already washed, dried and on my cutting table ready to go.

To top things off nicely, my pattern order finally showed up in the post. I know you’ll be asking so here’s the collection: 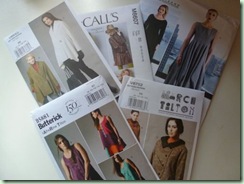 I felt I was being rather restrained at only 5! That’s 2 older Marcys and a new Katherine, plus the Mizono dress with the cool hem and a top that didn’t get great reviews except from Margy of A Fool for Fabric blog. She looks amazing in her several versions and for $1.99 plus postage it’s not a big outlay if it doesn’t work with the fabric that I planned. Anyway, I now have a great selection of Tiltons! So many of the other patterns are just too basic to bother with but the sisters share some of my funky/artsy design sense with challenging sewing. I would really love to see the stats on how popular their patterns are compared to others. Either I’m just drawn to the bloggers who sew this style or there’s a lack of other designers who create the kind of patterns that get my creative juices flowing. Since I have to do a lot of fitting and adjusting to a pattern anyway, I’d rather spend my money on something I can’t easily reproduce from scratch. I’m really done with pattern collecting for the time being.

What else? Oh yeah. I’ve been working on old shoes. I’ve had these green nubuck Birkenstocks since 1996. 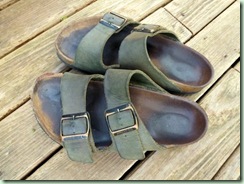 They’ve been resoled but the tops were grubby and boring. I decided to take a leaf from my online buddy pao’s book and paint them. Pretty! Shiny! I cleaned the leather first with a suede brush and applied light copper shimmer Pebeo fabric paint using my fingers and a small paintbrush to get into delicate areas where my finger wouldn’t fit. I let it all dry and then gave it a thin wash of chocolate shimmer mixed with Golden gel and GAC mediums to antique the bright copper a little. When my sandals were really dry (a couple of days), I polished them with neutral shoe wax. And now I have shiny new Birkies! They’ve already passed the Granddaughter Glitter Test with a “cool” rating.

The second pair of shoes that I revamped are my near-equally ancient Doc-Wannabees. 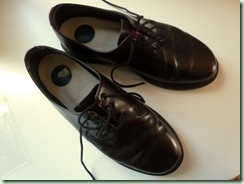 Ever since I had to wear black oxford shoes for my school uniform I’ve had a fondness for the no-nonsense oxford lace-up style. (Our warm weather uniform of saddle shoes…not so much…) These red-brown clunkers are probably only still in my collection because I love the idea of them rather than the reality. They are uncomfortable. You can tell because I actually bought gel insoles to try to make them more wearable. Not. The heels slid up and down with every step. So I decided to borrow a solution from my littlest granddaughter’s pedorthist (she was born with clubfoot) and glue a leather piece in the heels to stop the slipping.

I even got matching leather and contact cement for this project. It worked OK, especially after I removed the gel insoles, but sadly these will never be considered Walking Shoes. They are wearable for short distances only. I can’t walk 10 kilometres in my Birkies either so I shouldn’t feel so bad about it. But at least I now won’t be chucking them in the donate pile.

I'm definitely going to try the shoe remedy!! I have several pairs that I can think of already that need that kind of treatment. My right foot is roughly 1/2 size larger than my left, so finding the "right" size can be tricky.

I didn't recognize the names you mentioned when talking about the patterns. Do you have any suggestions for unusual asymmetrical or "artsy" silhouettes that are still pretty easy to sew? (I'm impatient). i haven't used patterns in years, but it might be fun and spur some creativity.

Sorry to take so long to respond, Jean. Hope you're still with me! I'll try to do a post on the patterns in more detail for you soon.