Well, I finally have photos! Guess I’ll start with some of the FOs I’ve been collecting up. 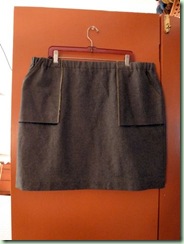 Pattern:  self-drafted straight skirt, elastic waist, big pockets. First used for the green Sweat Skirt in 2011 which gets quite a lot of wear.

Mods:  none except that I frayed the edges of the pockets to show off the unusual warp and weft colours.

Comments:  The pocket embellishment might have worked better if I’d actually cut the pieces on the straight grain. Unfortunately they’re a little wonky! They should fuzz up more after a wash and machine drying too. I stitched this all using straight stitches on the sewing machine. The side seams are flat-felled from the wrong side and topstitched. Apart from the fringed pockets, everything is completely finished on the inside.

This was a good use for a freebee piece of fabric and the colours should coordinate with several pieces in my wardrobe. I do need a brown top though so that’s on the agenda for the near future. 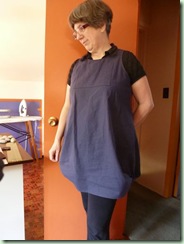 Pattern:  Modifications of my self-drafted pattern last used for the black & grey slinky top. It’s a tent-shaped sleeveless jumper that stops somewhere above the knee.

Mods:  I straightened out the hem and added a little extra width to the armholes and neckline. There is a seam at centre back to fit on the fabric efficiently. I also made a wide pocket piece. I drew the changes directly on the fabric with dressmaker’s wax crayon so I don’t really have a pattern for this variation. 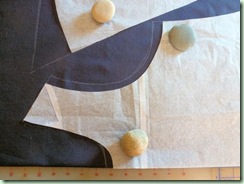 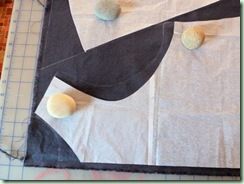 Comments:  I’m not really sure of the fibre content but it’s a fairly coarsely woven fabric that takes a perfect press so likely there’s at least mostly linen in it if not 100%. I only had 1 metre of this stuff but I managed to get a longer top out of it than I had planned. I sewed the hem leaving part of the side seams unstitched so I could tie the ends in knots on either side. This poofs the bottom out in a pleasing way. The pocket went centre front above the bust. It’s mostly decorative but could be used to hold my iTouch or a hanky.

I sewed the whole thing with a straight stitch and turned the seam allowances under and topstitched them so there are no raw seams anywhere. This was easy to do because the fabric pressed so nicely flat. It also creases quite a lot when worn but that’s just fine with me.

Another piece of fabric that I’ve been saving for eons is now a wearable garment. Yay!

And here’s yet another 2 garments that I finished this week: 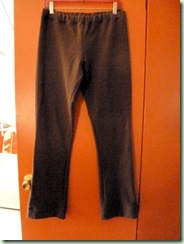 Fabric:  French terry, brown, actual fibre content unknown, 54” wide 2m. Recently purchased at Dressew for $6 per m. Used with the smooth knit side as the right side.

Pattern:  Traced from a favourite pair of yoga pants. (Not that I do yoga. Just that they were comfortable!) Style is a narrow leg with a slightly boot-cut hem.

Mods:  I needed to shorten the hem an inch or so from the original pair. For the second pair I didn’t have enough for full length so I made a capri-length leg with vented cuff.

Comments:  This is a perfect pattern! They don’t look that exciting on the hanger but they look great on. They fit much better than the last several pairs of leggings or pants that I’ve made. I also like the weight and drape of the French terry. This must be the fastest that a piece of fabric has gone from purchase to sewn up in decades! 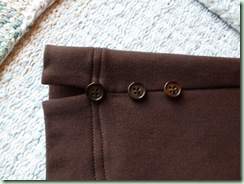 The non-functional decorative buttons for the capri version were a last-minute inspiration. They don’t really match each other perfectly but they use up some of the very old buttons saved in Granny’s Button Bag that I inherited from T-Man’s grandmother.

I call these Chocolate Cake because they are a wardrobe staple as described by Tasia of Sewaholic’s “cake vs. icing”. I will be making more pairs in both lengths soon I’m sure.

There are more factory-made garments lurking in my wardrobe that need to be “rubbed-off” before they wear out completely. The cool thing is that I like the knock-off version better than the original! I can adjust for fit and use better quality materials and stitching for longer-lasting pieces. Take that, garment industry! Better clothes are at my fingertips. BTW yesterday I wore total me-mades right down to the undies. Only my sandals, glasses and hearing aids were not. I’m slowly working on replacing my wardrobe with my hand-made clothing. I’m hoping eventually for at least 90%. Right now it’s about 50% of what I actually wear day-to-day.

I haven’t stopped knitting either. Flushed with the success of the yellow/red/green version which I’ve barely taken off since I finished it, I started the second Ruby Tuesday sweater. This one uses the yarn I was originally considering but didn’t think I had enough. I will be content with cap sleeves if necessary but I. Must. Have. It. Plus I have one more FO done but that will have to wait for the next post.

Meanwhile feast your eyes on this flower on my smallest disocactus: 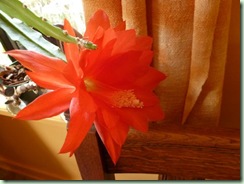 Isn’t it pretty? My flowering cactuses (Christmas, crab and disocactus) haven’t even gone outside to their patio for the summer yet. One of the Christmases is still flowering sporadically and there are already several buds developing on the disos. This was the first one to open. It’s as big as my hand! So magical. The plants themselves are rather unattractive and annoying. The pots are top-heavy and need to be propped and weighted or they fall over. There are teensy prickles that get stuck in you if you brush over the plants and they are long and strappy, chewed-up and decidedly homely things – until they bloom.

Now that first image looks like a mini skirt to me. Are you wearing them now? You have been making things like crazy. I, too, want to end up with all clothing that I wear made by me. I certainly like what I've made better than any old store-bought clothes that I still have. Totally gorgeous cactus. No luck with plants at this house.

Nope, not mini. (Though I did wear them in the mod '60's! When I was much skinnier. And younger.) It actually comes to the top of my knee. I don't have much of a waist though so it rests on my hips. I found if a skirt is too tight it just rides up to somewhere south of my bust which is where I'm narrowest so I keep 'em loose and comfy.

I think you're doing a great job with your very personal wardrobe, Pao!

That's my goal too!!! Both you and Pao are my inspiration!!!! I made four tops and two scarves recently, which rounded out some of my summer requirements, and my next sewing frenzy will be directed towards bottoms, probably more long skirts since I love them. Maybe I'll use my favorite yoga pants as a pattern and experiment with pants, too, inspired by your success. French terry, huh?!

I moved my Christmas cactus (which always blooms in early November) outdoors about two weeks ago, and it's got two blossoms! Didn't expect that.