Everything is getting down to the wire now! We officially leave next Thursday on the big Cross-Country Trek. I’ve been plotting our route (circular of course) from campground to campground and trying to make each hop a reasonable driving distance from the last one while keeping it interesting. It’s even harder than you might think! As much as possible I’m keeping to provincial and national parks and, since we’ll be going through the US on the way back, state parks. Our personal interests tend toward the natural world more than the manmade one, but I’ve also tried to include some history such as forts and living history museums and the like. However we’re mostly planning to avoid or just pass through any big cities. This will be an epic journey for sure! I’m kind of nervous about how far it is from home.

Happily we have a lovely woman who will be staying in our house and taking care of the garden while we’re gone. That’s a huge load off my stress factor not to have to worry about things like the mail and the watering. We haven’t had a lick of rain all July so it’s dry-dry-dry out there. That did not stop me from buying a new umbrella! 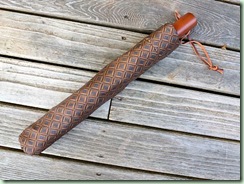 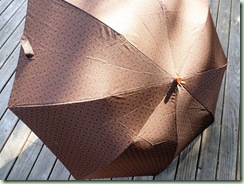 It has a UV coating so it also works as a parasol in the sun! This is a very special umbrella, made in Vancouver by a company that’s been in business since 1935, the Umbrella Shop. This is likely the last such company in North America. I’ve always wanted to check it out and when my old cheap foldie broke it was the perfect opportunity. I was served by the third-generation owner, Glen, who clearly loves his products. After I picked an umbrella out he carefully tested it and chose another in the same pattern that he said worked better and put the first one to be fixed. I love a true craftsman! Surprisingly it wasn’t as expensive as one would think for such as well-made umbrella and it also can be repaired for a reasonable cost as long as the cloth is still in good shape. It (usually) rains a lot here all year around so a good umbrella is not a luxury but a must-have accessory. Naturally I’m packing it to come with me.

Another unplanned project before we leave was a safe carry box for RJ, T-Man’s handmade cigar box guitar. You can’t exactly buy a pre-made case for these things and besides, that wouldn’t be in the spirit of “home-made”, would it? So between the two of us we pieced together this handsome custom case: 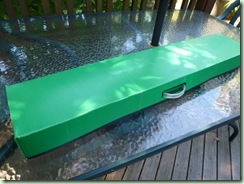 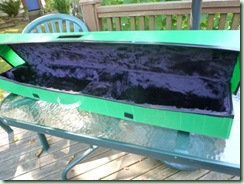 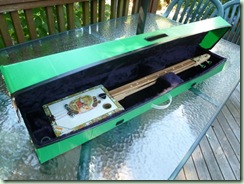 It’s made from a piece of green corrugated plastic box, packing tape, paper fasteners, electrician’s tape, a scrap of fun fur, a couple of small bits of industrial-strength stick-on Velcro, a plastic handle and a whole lot of spray glue. Nothing was purchased and the handle was found on the street when T was riding his bike home from his mom’s. Do not ask me why that fun fur was in my stash! I have no idea where it came from but this was the perfect use for it. It should keep RJ safe while we travel and T can entertain the neighbouring campers with his practising! I just hope the glue holds up.

So now we’re just finishing up whatever final chores are left to do. My knitting projects have been all ready to go for weeks. Next I need to pack clothes and books and all the electronic paraphernalia. And go fetch a bottle of Pacific sea water to take to the opposite ocean. Heh. Unfortunately there’s a bunch of stuff we can’t do until the very last minute, including mowing the lawn, making sure the garden is well-watered, getting my hair cut (it’s going to be in my eyes before I get back!) and some final groceries. Not to mention cleaning everything one final time. I think it’s going to be a nice rest after all this preparation, just sitting in the van and knitting while we drive along. And attempting to navigate us across 9 provinces and I haven’t counted how many states. (Poor Newfoundland gets left out this time. But one day…)

Are you going to have enuff electric stuff to blog as you roll about??

We have driven across Canada by car. It is a wonderful trip, you will have a great time.

Lynne, we'll have 2 computers, an iTouch and an iPhone. The problem is getting wifi in many of the places we will be. I'll post when I can!

Wowza! It sounds likes such an amazing trip. I've always wanted to drive across Canada. Have fun!!

Thanks for the reminder, Monica! Not being a Coffee Girl, I forget about these places. Of course that means one actually has to stop in, right? ;)

we got this solar charger at MEC: powerMonkey extreme.

may be a good thing for your trip

Thanks for the suggestion, Suzanne, but we already have a charger that works off the cigarette lighter while we're driving. No problem there!