We’ve had several adventures since I posted last. It somehow seemed to take a very long time to drive across from Lake Superior to just before the Ottawa River on the eastern border of Ontario. We went through several towns, large and small, which made us go slow more often than fast. We caught a glimpse of Lake Huron’s Georgian Bay and the not-nearly-as-large Lake Nipissing. Samuel de Champlain Provincial Park was quite nice especially on a hot day. Our campsite was in deep woods all by ourselves. We didn’t manage to see any of the three kinds of turtles in the park even though we went walking by the lake at dusk. The bugs were only semi-annoying. Believe me – that’s a compliment.

Next day we continued down the Ottawa River valley into Ottawa. We drove around downtown for a while until we managed to score a very tight-fit metered parking spot not too far from Parliament Hill. The rats would like the Prime Minister to know that they have some helpful suggestions for him so he can govern our country much better. Hint: Not a fan. 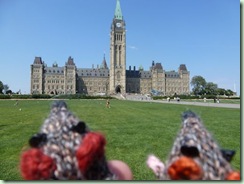 Sadly I don’t think he was listening. Maybe he wasn’t home? The big scare was when we got back to the van and it wouldn’t start! After all this time of running fine. What to do? We had to move all the luggage and bedding from the back where the engine is located as well as take off the bikes so T could look at it and see if it was anything obvious. Nothing. A call to the automobile association produced Mario and his truck in less than 40 minutes. He had the poor thing hoisted up and us loaded and off to the local Volkswagen dealer in a jiffy. Totally worth the membership fee! This was just freaky. 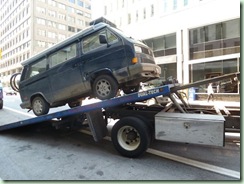 The shop couldn’t promise to get to us right away but they must have heard my wail about how our home was in our van and my loudly-expressed notion to camp in their parking lot until she was fixed! Three hours later, a new starter coil was installed and we were back on the road across the bridge and into Quebec. Great service above and beyond for what really is a rather ancient vehicle. We also asked the mechanic to try to fix the possibly-loose clamps causing the gas leak in the overflow but he said wasn’t able to reach it without dropping out the gas tank. Not happening out here! However it  hasn’t leaked since so he did something magical. We didn’t even mention the speedometer that broke the day before so no more cruise control. We can live with those little problems. The van hasn’t even had an odometer for years. We have no idea how far we’ve actually gone in total. It’ll be fun to try to add up an estimate later.

After the Dead Van Incident the trip to the Parc National d’Oka was very long and we were very tired by that point. Regardless we took the slower but much more interesting route, among the little French-Canadian towns with delightfully old buildings. We drove into the twilight with a big full moon and then into the dark that was splattered with a zillion bugs on the windshield. I was getting nervous that I wouldn’t see the brown signs for the park but we eventually found it. Hot and sticky and tired we got a campsite in the dark, managed to negotiate our way to it down a maze of dark gravel ruts. Our 6th Province!

This park was not a hit however. A squirrel or chipmunk managed to sneak in under the mosquito net in the middle of a hot and sticky night and T chased it out. Then we had to close the door which made it even hotter. The rampant raccoons we heard would have probably tried to come in next so it was a good decision anyhow. The dirty washrooms and poison ivy absolutely everywhere decided us on leaving the next day even though we were still tired.

The trip from Oka past Montreal and into Quebec City went fine. As usual it was tricky finding parking at a meter on the street but we lucked into someone leaving. We can’t park in the underground lots because we’re much too tall, especially with our Black Box in the well on the top. On foot is definitely the way to explore the old city. The roads are totally wacky. They obviously never benefitted from the Royal Engineers who laid out Vancouver’s mostly-sensible streets!

Here’s the lower city from above. 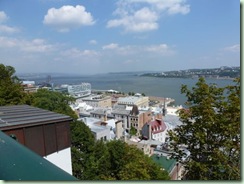 And one street in the upper city. 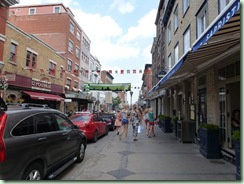 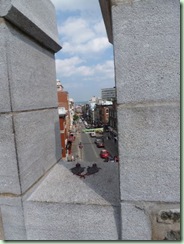 The Flat Rats decided that they liked one of the crenellations in the city wall best for the view. Old Quebec has the only city fortification wall north of Mexico. Very cool.

The city was truly fascinating (even if the shops and restaurants didn’t interest us) but we ran out of energy after a couple of hours of wandering about, climbing battlement walls, checking out the old buildings and narrow streets and ogling all the other tourists. You really can’t see everything! We decided to carry on to Montmagny on the other side of the St. Lawrence and about an hour further east. Got a piece of grass with a view of the river in a private campground. It’s quite a lot nicer than Oka! Even has wifi. 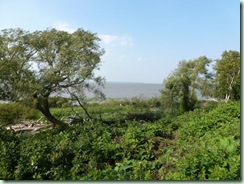 The view of the St. Lawrence from near our camp spot in Point-aux-Oies (Point of the Snow Geese). To the left out of the photo there’s also a river that falls in to the St. Lawrence over a small dam that totally disappears after the tide comes up over it! Who’d a-thunk the tide could come so far inland.

Addendum:
OK, I take it back about this campground! The yahoos near us decided to let off fireworks just about the time we were trying to go to sleep. Worst of all, the wifi was horrible and this post didn’t go through in 20 minutes of trying. I will explain all in the next post coming shortly.