OK, even though I have yet to see a blackfly, I can’t stop singing the song about North Ontario. I’ve seen enough mosquitoes to make up for the lack of blackflies though. I am one big puffy damselfly. Wait, that doesn’t sound right. Aren’t damselflies supposed to eat the mosquitoes? No? Pitui.

We caught our first real look at Lake Superior at a rest stop on the highway. 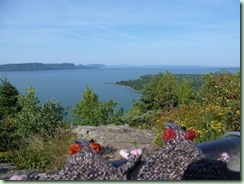 It’s even bigger than Lake Winnipeg and looks like the ocean but it doesn’t smell the same. Incredibly beautiful though. Unfortunately we got a bad ding in the windshield from a rock thrown up by a big truck on the highway. Hopefully it won’t spider out too much until we can get it fixed. Hopefully it will behave itself until we get home. The nice Speedy Glass man said that it might crack further if he tried to fill it with epoxy. The last time this happened was on the Alaska Highway quite a number of years ago and it was scary. This one felt like a gunshot. It nearly went all the way through the glass.

We camped at Neys Provincial Park on the lake’s north shore. We did some much-needed laundry at the “comfort station” and I hand-washed all our hand-knit socks. 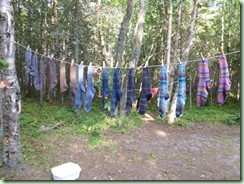 I don’t think they are going to dry anytime soon so we’ll probably be dragging them around for days! While the laundry was drying we hiked up the Lookout Trail over the Canadian Shield rocks. It was a challenging trail but the view was so worth it. 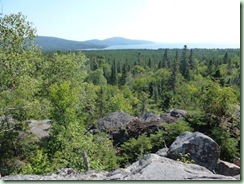 The most interesting trees here are the birches with their peeling bark. 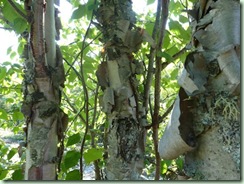 We’ve seen several different kinds of birds too, mostly warblers. We even saw my first blue jays this morning. They aren’t nearly as deep indigo blue as our Stellar’s jays but still very pretty. I just wonder what the botanists would have called them if they had seen Stellar’s first? Besides birds the only other wildlife we’ve seen are red squirrels and chipmunks. Plus the big horned beetles. One even landed on my arm and made me jump.

After dinner we went for a long walk on the shore. Who knew that there were waves! We can hear them from our campsite. And a sandy beach. T even found me a shell of a freshwater clam. 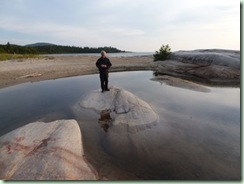 Even though there are no tides the shore is sculpted by the wind and the waves. I felt like I was in Oregon instead of Ontario. 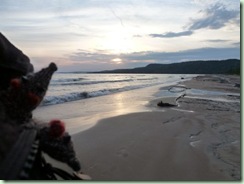 This theme continued the next day. We woke up late (6:30am EDT) but saw a bear on the highway as we left Neys which would be the only sighting of interest all day. We drove around the head of the lake and south through Lake Superior Provincial Park where we stopped to check out the ancient Ojibwe pictographs at Agawa Rock.

The trail down was difficult and rocky and trying to see the rock wall with the pictographs was worse. We could only see about half of them because you had to balance out on the slippery rocks just above the waves. There was an interpreter stationed there to help answer questions but I wished there were more handholds! Loved the Misshepezhieu, the “Great Lynx” who controlled the waters: lynx head, horns, spiky mane, and a long spiny tail. 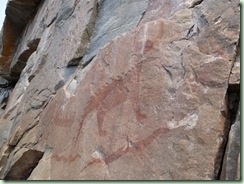 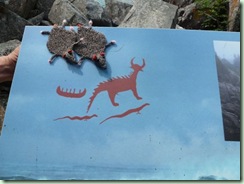 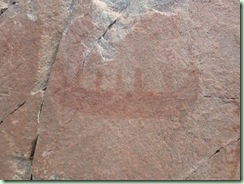 The loop trail went between close walls in a deep rock split. The temperature noticeably dropped in what was really a roofless cave. The cool was very welcome after all the scrambling and balancing! This is the view point where the trail doesn’t go: 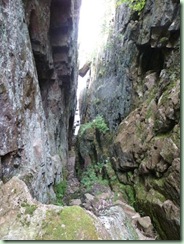 Yes, there’s a huge rock stuck in the crack.

We got into Pancake Bay Provincial Park rather late but there were still plenty of campsites. The beach is long and sandy and looks just like one in Oregon except that it’s not salty. Unfortunately the mosquitoes are the worst yet and we have no immunities so puff up quite badly. Need to use the bug spray more but can’t decide whether it’s even worse than the bites! The bug net is getting even more of a workout than it did in Manitoba.

We walked along the beach (me with my feet in the water) quite a long way to the north. Found a little rock pile: 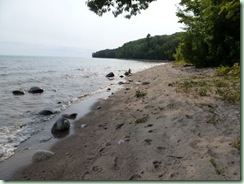 So we added a nice flat one to the top: 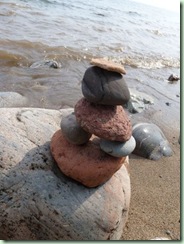 Of course we ate pancakes at Pancake Bay before we left. Today we’re on our way straight east to Samuel de Champlain Provincial Park on Ontario’s east side. We went through Sault Ste Marie and eventually saw part of Lake Huron, our second Great Lake. Now we’re outside a Timmy’s in Sudbury. It’s hot and sticky and there’s still a long way to go. Best eat my donut to keep up my strength, huh?

Louisa, go to a Canadian Tire or Walmart and get the Off! mosquito repellent clip-ons. The pesticide is in the clip-on and doesn't need to be applied to the body.

Wow, thanks for sharing the Great Lynx! It sounds like you are having a wonderful adventure.