We made our way out of New Brunswick by following the coastal tourist route marked by starfish signs at every turn. “Starfishing” was an adventure and we saw lots of lovely little square box houses and neatly mown lawns at every turn. The most interesting house of all looked like a ship, masts, furled sails, bowsprit and all! No time to stop and take photos though. Sorry. Everywhere we went they were flying the Acadian flag consisting of vertical stripes of blue, white and red with a yellow star in the blue one. Such a solidarity of spirit.
Eventually we made it to the really really long Confederation Bridge over to Prince Edward Island. Our 8th province! Yay! 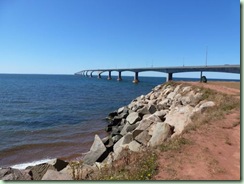 This is the PEI side. As you can see the soil here is really red. And yes, they do grow a lot of potatoes here! Also grains, hay, sunflowers and sweet corn. The island is mainly farms with some hardwood harvesting and of course, growing oysters and lobster fishing. So far we haven’t managed to get any lobster but keep missing the boat, so to speak. Interestingly the islanders are quite environmentally aware which makes sense since their economy is based on the land and sea. Plus all the tourism they can lure.
The first night on PEI we stayed at Cedar Dunes Provincial Park on the East Point. We had already glimpsed this part of the island from the New Brunswick shore but it was a long way around to it! The beach is on the Northumberland Strait and naturally had the iron-stained red sand. 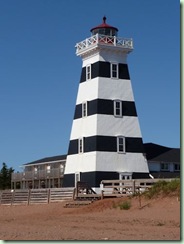 The West Point Lighthouse is black and white striped and has a museum, store and inn attached. Lots of people were relaxing on the beach and swimming in the relatively warm water. The Flat Rats liked the Flat Rocks so they made a sandwich: 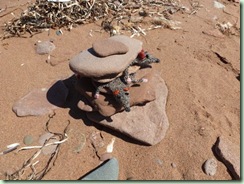 While we were resting up after our beach walk the seagulls decided to do some elaborate aerial acrobatics. Next thing I knew they had tried to add something to my wine glass! Ewww… 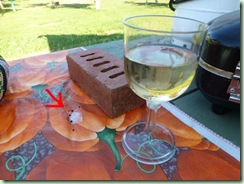 Good thing they missed.
Next day we decided to try the island’s north shore at Cavendish. PEI tourism definitely gets a lot of mileage out of their famous author Lucy Maud Montgomery and her Anne of Green Gables series. Virtually everything anywhere near PEI National Park has some kind of link. First we visited Green Gables, which is really the house of relatives of her grandparents and apparently inspired the story. 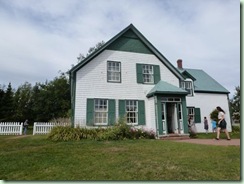 After viewing a short video on LM Montgomery we visited the garden, the barn, the house and took a walk down the Lovers Lane and around the Balsam loop. The house was furnished in period but some things were just a little off. This is part of the sewing room: 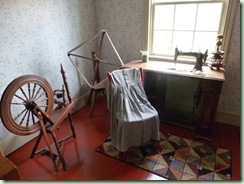 Fellow textile enthusiasts will notice the poor spinning wheel was missing a spoke and the sewing machine was in a dreadful state. We won’t even talk about the lousy skein of thick commercial yarn with one knitting needle sticking out of it which I didn’t include in the photo. I guess museum people aren’t completely up on their textile stuff. Or good enough is good enough for most tourists. However there were a couple of nice red and white overshot coverlets on the beds and a lovely knitted lace shoulder shawl plus some very passable hooked rugs everywhere so it wasn’t all sad. I know. I should enjoy it for the effect not the lack of absolute truth. Right.
Later we got a campsite near the beach and went for a long walk on its red sand. I loved the red rocks (of course!) 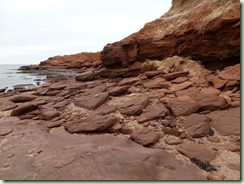 And the tiny sea shells along with the colourful seaweed: 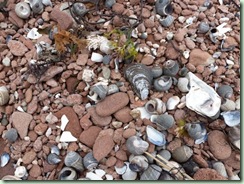 This is what I call a “texture shot”. The Flat Rats found an inukshuk to play with: 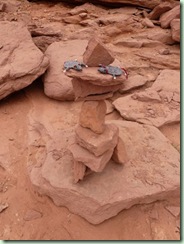 I don’t know what they did to it but the minute I picked them up and turned around, it fell down! 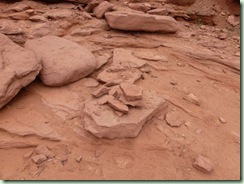 I swear we barely touched it! Ooops. No, we didn’t even try to rebuild it. Someone else can have that pleasure.
It started raining just about the time we were turning around to go back. It was a long way so we were glad the rain didn’t amount to much. 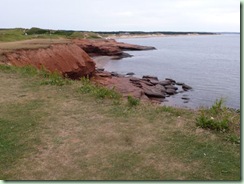 The campground beach is in the far distant line at the top of this photo. It was about 3.5K return and then – the rain stopped. Just enough to get us damp and make us walk quickly. Sheesh.
Next we’re trying a different section of this long narrow park. We travelled along the shore road and stopped at one or two of the spots along it. I love this point covered with cormorants and one heron (which we saw with our binoculars in the middle): 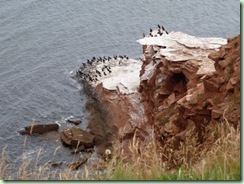 The white is many layers of guano on the red cliffs. Happily while we were there we saw one of the local red foxes, a youngster out hunting his lunch: 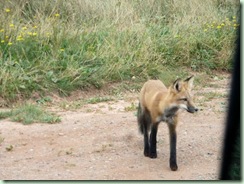 It didn’t even notice we were there in the van so I got this shot through the window. Then we went south and around to the next-easterly part of the park called Brackley-Dalvay. We got a nice campsite in the white spruce and took our bikes along the paved trail that parallels the road toward the inn of Dalvay-by-the-Sea: 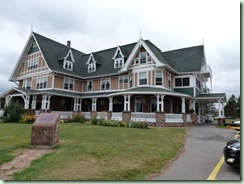 This house was built as a summer home by a rich American businessman and is now a part of the national park. It’s quite handsome and I got a kick out of riding my bike through the portico where once horse-drawn carriages stopped to let off guests.
Next it was off south through a foggy morning, going by Charlottetown and down to the ferry at Wood Islands to take us to our 9th province, Nova Scotia. We saw what we suspect were porpoises off the ferry and a bald eagle on the PEI side. (ETA: They were more likely pilot whales!) Here’s our first view of a Nova Scotia lighthouse at Caribou. 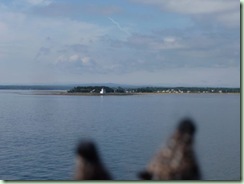 Tried sending this from the line-up while we waited for our ferry but the connection was too slow. Then I tried sending from the Timmy’s in Pictou but it was too weak to connect. Tried to send it from Whycocomagh Provincial Park in the middle of Cape Breton, NS, but that didn’t work either. BTW I have it on local authority that they pronounce it “why-COG-amah” and it’s on the side of the Salt Mountain above the Bras d’Or Lake which is really a minimally-tidal salt water series of inlets and bays. 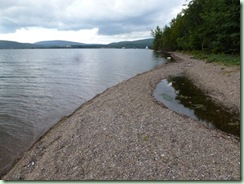 We went exploring and here’s the teeny beach across the highway from the campground. And look what we found, a totem pole from BC! The only one in Nova Scotia. 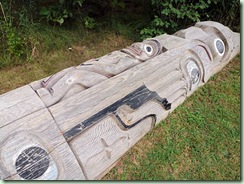 It was carved by a Patterson McKay of the Greenville Band (now part of the Tsimshian First Nations) and gifted to the information centre near the Canso Causeway onto Cape Breton in 1971 for our BC Centennial. It was retired here to Whycocomagh PP in 2008 to be allowed to go back to the land. However far we get from home, we can still find a piece of it unexpectedly.
Currently we’re at the Highland Village Museum in Iona. But more about that later. I need to FINALLY get this posted. Off again to see more of Cape Breton!

How fun Louisa...and you saw a fox close up. That is really cool.