We woke up at the bare crack of dawn on Thursday but it still seemed like it took forever to finish up the final packing and get on the road. I was reluctant to leave the garden without a lot more watering first. Plus having someone come to stay in our house meant that both of us got a near-fatal attack of Housecleaning! I don’t think the old homestead has been so spiffed up in years. Eventually however we both said enough is enough and the Flat Rats waved goodbye to our house as we left. Two months seems like a very long time to be gone! 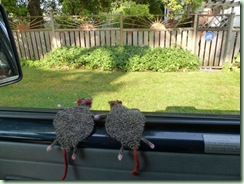 I was somewhat nervous about our first few days out and where we would stay after the first night’s reservation in Kettle River Provincial Park. It’s a holiday weekend (BC Day) and there was a gap of two days in which we couldn’t get reserved anywhere else within a reasonable jump ahead. Luckily we did get reservations for Waterton National Park in the southwestern corner of Alberta on Sunday and Monday nights. So we just played it as it came. Our little van is pretty well self-contained which gives us a lot of options and usually things work out fine. Sometimes even better.

The weather hasn’t been cold but it is definitely variable with sprinkles of rain and even a couple of thunder and lightning storms. How odd after all the sunshine and dry weather we’ve had for over a month. Of course it happens that it all changes the very day we left! Typical. Before the Kettle River storm we got to soak our hot feet in the river but the Flat Rats declined this opportunity. Their loss. 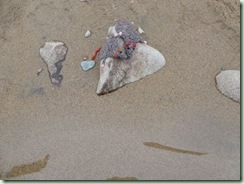 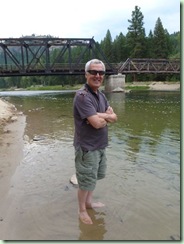 The Flat Rats have taken to riding in my shoulder bag when we go walking. They found a pocket where they’re secure but they can see everything. 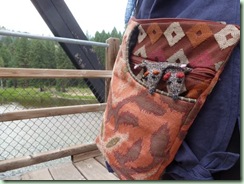 Next morning instead of trying to grab another campsite, we wisely decided to carry on toward Alberta and managed to squeak into a provincial campground in Yahk in the South Kootenays for two days. There is nothing to Yahk itself but a general store/gas station, a “Bates” motel and a pub. Plus several noisy trains whistling through per day. The little campground was otherwise rather lacking in excitement. Except for me getting bitten by what I think was a horsefly. Hurt like a bee sting but took a chunk out of me! Ouch. Never saw the perpetrator but my leg puffed up rather nicely. Just glad it wasn’t a wasp. I’m allergic to wasps and the nearest hospital is who-knows-how-far away. At least I got a new EpiPen before we left. Expensive but necessary insurance. Hope I never have to use it. Otherwise the bugs have been pretty non-existent so far. We tested out the new bug screen once or twice mostly to keep out the wasps.

We managed to find a little bit of a trail by the Moyie River to investigate. I’m sure the Flat Rats want you to think that they tried to gnaw this huge tree down by themselves! 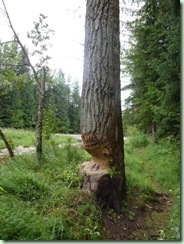 Don’t tell them that it was definitely a beaver. I’m pretty certain I didn’t give them any teeth anyhow.

Today and tomorrow we are in beautiful Waterton National Park, AB. 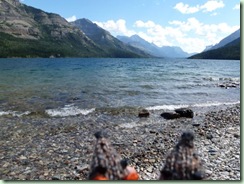 The place is quite a circus! We’ve never been here in the summer before and the little town is hopping on this holiday weekend. (Yes, it’s a provincial holiday in Alberta too.) All the accommodations are full and all the ice cream parlours had line-ups outside. We didn’t join them but were happy enough to get a nice hot shower finally. The Flat Rats somehow got hung up with the towels to dry under the awning. 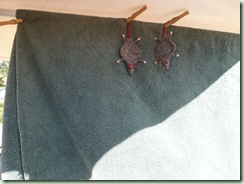 It was really windy all day so I guess they thought it was safer there and they couldn’t blow away. There is definitely Wi-Fi in town but here in the campground it’s just out of reach so I’ll post this as soon as I can. Right now we’ve got another spectacular thunder storm and heaps of rain! Never a dull moment, huh? Thankfully it waited until after we had dinner and did the dishes so we had everything under cover in time.

We’ve now moved from the Pacific Time Zone to the Mountain Time Zone. One Canadian province down; eight more to go. Yes, I know there are ten in total but we unfortunately have to skip the last province, Newfoundland, this time around. There just isn’t time to do it all.

ETA: It’s Monday now and we’re at the Trapper’s Mountain Grill in Waterton eating fabulously yummy pulled pork quesadillas and beer (him) and pear cider (me). We have a weak wifi signal from across the street at the Bayshore Inn. Things are slightly quieter around here today. We’re off tomorrow for Cypress Hills on the border between Alberta and Saskatchewan. Post again when I can!

Hurray for getting launched on your exciting cross-country journey! I hope the flat rats continue to behave themselves. I have found that traveling with handmade friends makes it easier to ask strangers if you can take their pictures--ask them to pose with the rats!