When I left you last I was freezing my fingers off trying to post from the registration booth in New Discovery State Park, Vermont. The wifi was excellent but the wind was frigid! T got directions to the town just across the state line in New Hampshire where they assured us they had the right kind of oil for our poor ailing VW Westphalia. The route was luckily mostly downhill and off any freeways even though it was about 20 miles back and south of where we wanted to go. We got there without too much trouble and even though we were early they took us right away. Only charged for the oil and changing it was free! Such nice fellows and great service. We were crossing our fingers and toes that that would fix the problem.

We only drove a short way and thought it seemed better. Stopped for lunch by a covered bridge, our seventh but only the second one we actually got to photograph. 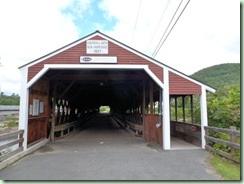 It was built in 1827 and only taken out of commission in 1999. If you can’t see the sign it says “$5 fine for riding or walking over this bridge faster than a walk”. There’s another sign that says only a maximum of 200 people can use it at once! Har-har.

Unfortunately after we got really going again, the compression was still quite bad so we stayed mostly off the freeway and went by the smaller routes past the Green Mountains of Vermont and into New York for an originally unplanned stop at Moreau Lake SP. Nearly got us lost once but a nice lady at a gas station put us back on track. Happily somewhere along the way the last of the gunk got cleared out of the engine and she started working properly again. Yay!!

The landscape was quite different in New York as was a lot of the architecture. Saw lots of amazing old buildings in Federal, Colonial and other styles as we went through small towns and cities. Some nice stone and brickwork too. Sadly we couldn’t stop for photos.

Moreau Lake was very pretty but we were kind of beat by the time we got there. We had a hot shower and supper and crashed without seeing much except the maple and oak forest we were parked in. It was quite quiet with very few other campers.

Got going early again and I navigated us on highways, side roads, toll freeways and everything in between. Soon we were looking out from our campsite above Lake Ontario on the US side at Fairhaven Beach State Park. The van performed excellently well the whole way so obviously the new oil finally got through everything. Yippee! There’s some hope that we’ll be home some day yet! Arrived by lunchtime so we had plenty of time to take a long walk by Sterling Pond, across the causeway between it and the beach and out on the federal pier that protects the harbour from the lake. 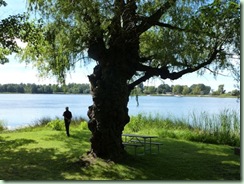 OK, he’s not that old but the willow is! What lovely burls. That’s Sterling Pond behind. And the Flat Rats were feeling kind of perky so they decided to try sailing in Lake Ontario: 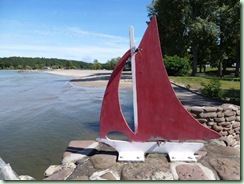 They were surprised when they didn’t go anywhere except back in my bag. We watched an osprey and a young bald eagle play-fight each other in the air. So cool! Saw lots of deer in the park, several kinds of butterflies, ducks, geese and even a pair of mute swans. 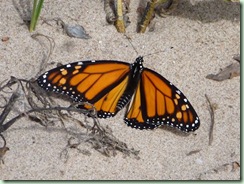 We discovered the catbird who definitely sounds like a cat meowing. I think we’re having fun again. Whew. It’s still a very long way home.

Woke up early to rolling thunder and lightning across the lake. It was a lovely display! Eventually of course it caught up to us and we left the campground in an unnaturally dark and very rainy morning. It cleared up along the way but it’s very hot and humid. Ick. We’re currently somewhere outside of Buffalo just off the toll interstate in a “service area” (aka rest stop) and on our way to Niagara Falls. They have a Timmy’s here too! And free wifi.

Travel stretches us in so many ways! I hope your motor gets fixed and you continue to have fun.