More Caving And Then Onward

We managed to get an electrical campsite in Lewis & Clark State Park because although the days were sunny, it was still windy and cool and the nights were quite cold. It’s nice to have a heater to take the chill off in the morning! Makes it much easier to get out of bed when you can’t see your breath, let me tell you. The magpies and mountain blue birds didn’t seem to mind it though. Neither did the mule deer. We saw the biggest herd ever – 8 or 10 does and fawns together.

Lewis & Clark Caverns was the very first cave we went into a number of years ago and the one I credit with getting me over my fear of being underground. It also created a desire to try other caves and we’ve found that each one we’ve tried has its own beauty. This one might be the most incredible though because of the many types of features it contains. So beautiful.

But first you have to get there! It’s a long uphill trail to walk with the guide to the entrance and at an altitude of over 5,000 feet it’s a bit of a slog for us sea level folks. However the view is spectacular enough to make up for it: 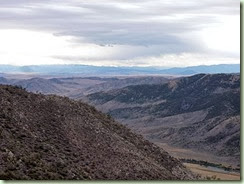 That is snow on the highest mountains and the river below is the Jefferson. Lewis & Clark did indeed explore past here but they didn’t find the cave that ended up being named after them. That was left for later folks to discover. And plunder. Sadly there were many broken stalactites before sense prevailed and the caverns were protected.

This cave system is a little tighter to manoeuvre in than the other two we saw on this trip. There’s even a spot where you have to get down and scoot, called the Beaverslide. Watching where your head is going at all times is very important. Being short is finally an advantage! Here’s a hint of what it looks like in there: 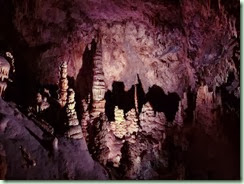 The pinkish lights are apparently newer and are supposed to give a closer rendering of the true colours. The older lights are browner: 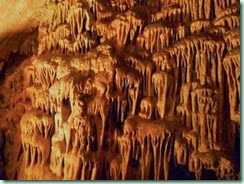 The shapes are all so fantastical, aren’t they? Here’s another one: 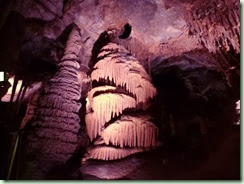 They’re reminiscent of layer cakes and draperies, bacon and soda straws, ice cream cones and a baseball bat. Visitors have named the Lovers, the Sumo Wrestlers and even the North Pole with Santa. It took millennia to form them because it takes at least 10 years to create one tiny centimetre’s worth! Most of the broken bits haven’t even started to grow back. Although things are damp and some parts are drippy, interestingly there’s only one larger pool down there: 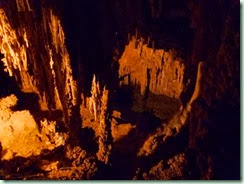 A little hard to see there in its own little grotto, it’s about 5 feet long and clear enough to see right to the bottom. While we were climbing up from the lowest level, the 19th step had this inscription: 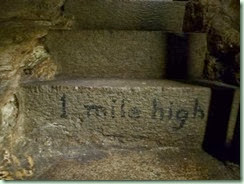 Yes, we were a mile above sea level – but still over 500 feet under the mountain! Although we’d been there before, it was still an exciting tour the second time around. And in case you wondered, the walk back was quite a lot shorter because we came out further down.

We stayed at the campsite for two nights in total and then headed off again, ever west towards home. We thought we might hit some snow in some of the high passes but only some fog instead. Pipestone Pass was particularly beautiful with rounded columns of rock that were quite unusual. Sadly, no photos because we weren’t stopping. Too far to go. We crossed the Great Divide and into Idaho (our 13th State) and finally our own Pacific time zone, then across the narrow part of Idaho and into our 14th and last State, Washington.

It was a bit tricky but I managed to navigate us to Riverside State Park, on the western side of Spokane and tucked beside the Spokane River. It was a small though busy campground but we found an electric site where we could watch the Canada geese flying in V’s up the river and the California quail scooting through the campsite. It had been a long drive from Montana so it was nice to relax while it rained intermittently all evening.

After some discussion we both decided we were getting rather tired of this marathon camping trip. Awww! The original plan was to head northwest from Spokane and go through the North Cascades before going home. But the weather has been unpredictable and cold at night and there are NO electric sites in North Cascades. In the deep, dark, damp forest. In the high mountains. Sorry, not going there right now.

Instead we went more-or-less straight across Washington to Lake Chelan (pronounced “shell-ANN”) State Park. It was an interesting drive, through rolling fields that reminded us of Saskatchewan and then down into deep coulees and up again. At Grand Coulee we crossed Dry Falls Dam at the end of Banks Lake. Finally we came down, down, down to the Columbia River were we turned north along the river for a little while among the orchards full of different types of apples and pears. So delicious you could even smell the apple fragrance while driving by! Yum.

After crossing the river and switchbacking up the 4-mile Chelan River we got to beautiful Lake Chelan. 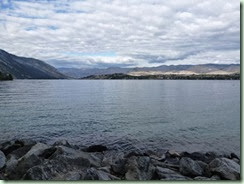 This lake is very deep and very long (50 miles!) and at its northern end it reaches into the afore-mentioned Cascades. The only way to get up there is by boat or plane because there’s no road. Happily the state park is only a few miles along the southern side so no boat was necessary – though that might be fun some day when we have more time.

The lower more “civilised” end of the lake is crowded with vineyards, orchards, hotels, inns and resorts. There’s two towns, Chelan at the river end and Manson, which is across the lake from our campground. We didn’t get much time to explore but it seems like a fun place to spend some time. Instead we’re heading home after only 2 nights here. It’s been a very long time – the longest that I’ve ever been away in my whole life! I miss my family, my home and my garden. Also hot showers, a warm bed, an oven, fresh vegetables and laundry facilities. And of course wifi anytime I want it. As you probably noticed, I didn’t find any convenient wifi anywhere since way, way back in South Dakota. Sorry to make you wait for the rest of the trip!

We’re finally at home safe and sound after a total of 59 days. Yikes! Turns out we left Montana just in time before the temps plummeted and snow fell. We also slickly avoided most of the big rainstorm today in Washington which flooded many areas – though it rained almost all the way from Lake Chelan. However we sure felt some of the force of that storm while heading for home across the Alex Fraser Bridge and the East-West Connector to the Knight Street Bridge this afternoon. Big puddles and lots of hard rain! Rooster tails on all the vehicles. Sploosh! We didn’t quite make it to our estimated October 1st deadline but enough is enough, right? It wasn’t supposed to be an endurance test. (But it sorta kinda actually was!) I’ll be back soon with a recap of The Great Cross Country Trek. But first I need a night’s sleep in my very own bed.

What wonderful pictures...glad you and your truck made it home. We camped at Lewis and Clark one year, and the wind knocked our trailer off the block (beginner error on our part). The caves are gorgeous, aren't they?

Welcome home!!! Glad you are back safe and sound. Enjoy the luxury of your comfy bed and central heating.