Yesterday was a lovely fall day, alternating cloudy and sunny but relatively warm and perfect for a walk in the crunchy leaves. As a matter of fact, T and I both ended up dressing too warmly. Really, I needed my knitwear on even if I was broiling. We were headed to Knit City!

Of course, getting to the Croatian Cultural Centre only an hour or so after Knit City opened was just a little nuts. It was a madhouse! The 60 or so booths were very tightly packed and it was hard to get into many of them. It was nearly impossible just to walk down the isles between. My guild, the Greater Vancouver Weavers & Spinners, had a demonstration booth that was quite large in comparison to some but they were still complaining that there wasn’t enough room for all the spinning wheels. I didn’t volunteer this time but I definitely would have brought a drop spindle instead. Though there might not have been room for that either. Really. Apparently it’s quieter on Sunday so I guess we could have gone today instead. Nevermind. All the good stuff might be gone already! Like I needed anything at all.

I hadn’t attended this event last year (the premier) but it certainly seems like a definite hit. Most booths featured the yarns of indie dyers but there were also polymer clay buttons, shawl pins, stitch markers, patterns, books, kits, bags and lots more. I did notice a distinct lack of knitting needle options and not much in the way of spinning equipment (no wheels) with only a smattering of dyed braided fibres. The rug hookers had a booth though with lots of lovely dyed wool fabric swatches. I can tell you my secret test-knit/pattern rewrite scarf was there in the Sanjo booth! I tried to take a photo with my iTouch but there wasn’t enough light.

After avoiding other people’s hand-dyeing for ages, I finally succumbed to a few skeins. Yes, I know – there’s a whole dye studio just downstairs from where I’m sitting! But this deep red semi-solid called to me from Raventwist: 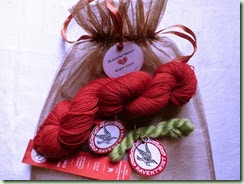 I hadn’t heard of Raventwist before and with a little googling found out that it was formerly known as the Rocky Mountain Dyeworks. Owner Hasmi Ferguson has rewritten her story and the results are quite lovely. Sure wish I could get my hands on some of her base yarns! They are truly scrumptious.

The other two yarns were these from Sweet Georgia: 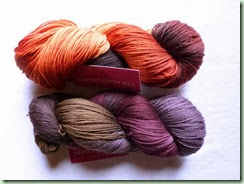 Both are Tough Love Sock (80% superwash merino/20% nylon) though oddly they feel somewhat different. Perhaps a different batch of base yarn? The top one is “Phoenix Rising” and the bottom is “Rogue”, which seems a little more subdued than the example on Sweet Georgia’s website. It totally matched T’s outfit yesterday so it’s for him. I’ve wanted to test out Felicia’s sock yarn for awhile since I know I can get it from her in undyed white if I want. I was only going to get one skein but you know how it is, right? Like potato chips.

I was congratulating myself on escaping the wool fumes without totally smoking the credit card! It’s not like I really need any yarn. Or fibre. Or tools. Or anything really. It’s just fun to look and perhaps get a souvenir. After all, I didn’t buy much at all during the cross-continental trip! Only 2 books. Never even went in a yarn shop. I brought all my knitting yarn with me from home. So I deserved a little splurge yesterday, didn’t I? Of course I did.

Naturally I ran into a number of friends and fellow fibre enthusiasts. Found a secret Damselfly’s Delights reader. (Hi, Carmen!) And finally met Skipper (aka Marilyn) in person. She is the editor of WEFT magazine (Westcoast Enthusiasts For The Fibre Arts, formerly Island Shuttle), a little newsletter to keep you informed of fibre happenings on Vancouver Island, Gulf Islands and the Lower Mainland. I love it when you finally meet a virtual friend IRL and you feel like you’ve known them forever. Hugs, Marilyn!

So what else? Oh yeah. Here’s a hint of the t-shirt fabric my biggest Grandbeastie (currently called Princess Silver Fang, for reasons that shall remain blogless) and I scrunch dyed: 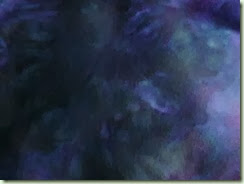 It’s hard to get an accurate representation of the colours. I don’t think it actually has black showing up anywhere in it! More blues, grays and purples which may not please Her Highness as much but I did warn her it was impossible to really control the results. This technique is usually referred to as Low Water Immersion (often abbreviated to LWI) and it causes this black dye to really split up into its component dye colours. This is the same dye I used on my Stormy Dress. It’s always fun to see what you get!

We got the piece (100% cotton) wet by scouring it in a bit of Synthrapol, scrunched it in a bucket, poured in a little more water and then mixed up two cupfuls of dye. One was 1.5 tsp of Procion Black to about 3/4 c warm water and the other 3/4 tsp Procion Purple (a Maiwa proprietary mix) in about 1/2 c warm water. The Princess and I both wore nitrile gloves and dust masks until the dye was thoroughly mixed and the lids back on the dye tins. It’s never too early to teach safe procedures. We both kept the gloves on for the rest of the time. Surprisingly my small-sized ones nearly fit her 9-year-old hands. Of course I have notoriously tiny hands and she is growing so fast.

First the Princess poured over the black and we let it sit for a few minutes before flipping over the fabric and adding the purple. About 15 minutes later we mixed up 1-3/4 tsp soda ash in a cup of warm water and poured that over top, poking a bit to make sure it got to all the layers. We covered the bucket and that was all the time the Princess had so next day I rinsed out the fabric myself, first in cold water and then in warmer. Finally I dumped it in the small dyepot with hot water and a little Synthrapol and brought it to a simmer for about 10 minutes. After that it went into the washing machine and the dryer to finish. Now it shouldn’t ever bleed in the laundry. The next part of the T-Shirt Project can’t be done until she has time to come back and sew with me.

We managed to have time to trace her favourite t-shirt for a pattern. She loved the drawing part but I had to explain a couple of times why I was adding the seam allowances around her tracing. To allow space to sew it together! I also folded the paper in half before letting her cut it out so that the two halves were symmetrical. Now we have a pattern and the fabric is all ready to go.