Yeah, I know! It’s been a ridonkulously long time since I posted last, hasn’t it? My excuse is that I’ve been very busy. My sister D is visiting from Haida Gwaii. She’s taking 2 back-to-back classes at Maiwa Symposium with Carol Soderlund using Procion MX dyes. At the same time she’s had many periodontist, chiropractor and hair dresser appointments, gone shopping for clothes (both high end and thrift), investigated Granville Island shops (including Maiwa Supply), and nearly melted her poor credit card. And we haven’t even gone to the Circle Craft Christmas Market at Canada Place yet. That’s on the agenda for Saturday. Whew!

Learning where everything is and how to get around in an unfamiliar city is hard. T has been driving her as much as possible and I’ve gone with her on public transit a few times but D has also had to navigate the system by herself. She’s now the queen of the Seabus to North Vancouver after having taken it back and forth 3 times to the periodontist. Trying to jam everything into 10 days is making me tired just watching. She seems to be (mostly) having fun anyhow though I bet she’ll be glad to fly back to her sleepy island paradise on Sunday.

So I have nothing else exciting to report! Had a birthday, knit some, read some. Oh and I got a new book. (Why are you surprised?) 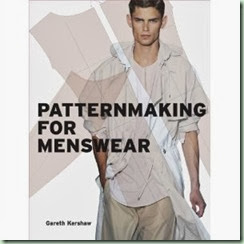 Peter of Male Pattern Boldness was very excited about this patternmaking text book from Laurence King that is specifically for men. His review is here and he does a much better job of it than I can so if you’re at all interested in patternmaking for the guys in your life, check it out. I’ve actually sewn quite a bit for T-Man in the (distant) past and am eager to do more. He actually wears his recent Newcastle Cardigan regularly so that’s a good incentive, no? I have a shirt in mind for him next.

Believe it or not, men are much easier to fit than women. More tubular; less contours. However they can be very particular about their garments’ styles, colours, fabric choices as well as fit. Except for the rare hipster it’s best not to push “stylish” on them. Even the guys who only wear casual clothes are not going to want anything too different from what they are used to wearing. On the other hand, in my experience if they like a piece it had better be durable because it will get worn to death and beyond. What a challenge! Love it.

Abruptly changing the subject again, I’ve mordanted a few silk scarf blanks in alum so D and I can play with eco-dyeing them on Friday morning before her last class. So hopefully I’ll have something more exciting to show next time.