Back To The Garden

The old bod’ feels a bit crunchy today. We spent quite a few hours in the garden yesterday cleaning up, inching towards winter. I brought in my poor cactuses which had suffered somewhat on their patio without me there to coddle them. I had to trim some raggy bits off and repot a couple. The upside is that they fit better in my living room and the disocactus that always wants to keel over is more stable now. I was surprised that there are no buds forming yet on the crab and Christmas cactuses but hopefully now that they are in a warmer clime they will perk up.

I cleaned off the decks while T mowed and we put away the summer furniture. The deck pots will have to wait until I’m done in the greenhouse before they can go to bed. The tomatoes are cleared but I have to finish smoothing the soil and I want to plant a few seeds in there. It may be too late for cool weather greens to do much but you never know. And speaking of seeds, I got quite a lot of dried beans from the runners. I save their seed every year and rarely buy packaged ones. The variety I like best, Painted Lady, is so pretty and I can’t find it easily. The flowers are red and white and the pods are smoother than the regular Scarlet variety. The seeds are brown instead of purple so they are easy to distinguish from each other at that stage too. I mix them both in the garden because, hey, I like variety!

And speaking of seeds (some more), for the first time my Japanese indigo actually set seed in the garden. Whoo-hoo! I think it was the combination of whatever weather happened while we were gone and the fact that I never harvested any of the plants for dye. The plants on the sunniest side of the bed matured first. No surprise there. I picked a bunch of the flower stems and brought them in to the windowsill as usual. They’re already popping black seeds where they don’t usually mature until the end of the month or even into November. I think I’ll pick another bunch soon and bring them in before we have a frost and hopefully get more seeds from them. Because July was very sunny there was a lot of indigo in the leaves back then but now I don’t think there’s nearly as much at all. I don’t have time to try it anyway so they will just be compost when I’ve gotten enough seeds for next year.

We didn’t get many tomatoes for ourselves this year. For starters, I didn’t plant nearly as many as I usually do. They were barely starting to ripen when we left August 1st so I only took one little bunch with me. When we got home most of them were eaten, either by our house sitter or by our kids and grandkids who came by to glean goodies from the garden while we were gone. I did get a small bucket of unripe Black Cherry, Green Zebra and Juliet tomatoes which hopefully will ripen on the kitchen counter. I did harvest 4 lovely large cabbages before we left and put them in the fridge where they survived nicely. And there’s still kale out there. I did miss my little pattypan squashes and yellow zucchinis that I didn’t bother planting at all. But there’s always next year, right?

Of course there’s lots of work left to do in the garden, including planting the garlic for next year. The weather hasn’t been great so we had to wait until it dried up some and even then, there’s only so much we can do in a day before we wear out! We both really enjoy it though. I kind of missed my garden while we were away. Hope the old bod’ survives another session out there later today! 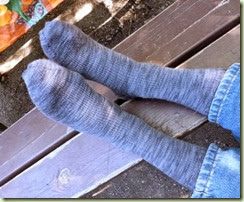 Comments: Just another pair of plain socks for my man who is wearing out some of his older pairs. This discontinued yarn is a little different with the stretch poly content. He hasn’t noticed anything unusual in wearing so we’ll see how they hold up over time.

Sorry about the rather dorky photo of T’s feet on the campsite picnic table. We were in Manitoba and I’d just got the socks off the needles. He wore them for the first time before I’d even washed and blocked them. I didn’t think he was that desperate for clean socks – but there you go.

And from the plain to the elaborate: 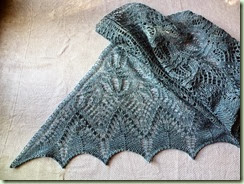 Comments: This was a great pattern to keep me occupied when we were camping and I was tired of reading or hiking. A centre-neck-to-edging triangle is my favourite shawl shape. It had everything: sections with plain wrong-side rows and sections with action on the wrong side too, plus nupps. It’s a little bit asymmetrical as well but you don’t really notice in the finished article. The results came out a light and airy scarf-ish size but that’s just fine with me. I love how the wool/silk blocks so nicely!

There are several more projects to come but that’s it for now.

Glad to see you got home in one piece - that was a hellova trip in an elderly van!!! My cacti are only just starting to set buds. The weather was so good & tossed my Sansaveria outside this year & it has several new blades on it. I have to repot or add dirt to all of them this weekend & bring them in too. My Cyclamen thinks it's spring out there & is blooming all over again!!
Where did you get your other Scarlet Runner beans?? I thought there was only one variety???

Great job on that scarf! I adore the colour too. And I love to use dried runner beans for baked beans, like my Great-Aunt Margie used to do. So rich and meaty.