I know I’ve been seriously remiss of late. It seems hard to get back into the writing mode. Or maybe not the writing but the taking of photos seems to be holding me back. It should be fun and not drudgery, right? The dim light that we have this time of year is the biggest problem. Luckily yesterday was sort of sunny so I finally got a few things documented. I doubt I will ever be any kind of great photographer however, especially of anything other than scenery. But that’s ok. One can’t be good at everything, can one?

I do need to document my projects though so even meh pics are better than no pics. In my last post I told you about mordanting silk scarves for eco-dyes. Here’s mine: 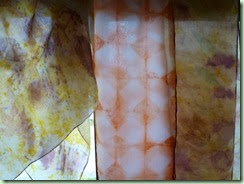 They were so pretty I hung them in the window! You don’t get to see the one Sis made because she had to pack it the minute I ironed it. In her extremely full suitcase. With a metric tonne of shopping. Bet that plane had trouble getting off the ground with all the goodies she was hauling! But I digress.

The two outside scarves (as well as D’s) were covered with local fallen leaves and marigold petals and wrapped in plastic before steaming for an hour. We used red maple, purple plum, smokebush, cranesbill geranium, birch, walnut and small woad and weld leaves along with the marigolds. Here’s a detail where you can see the shape of the maple leaf: 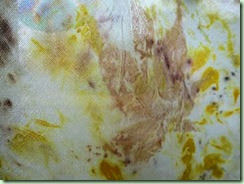 D had great fun with this new-to-her technique. It’ll be interesting to find out what leaves and other plant items she can find back in Haida Gwaii to try.

The centre scarf was dyed with a simple itajime shibori technique instead of leaves. It was folded and clamped between offset squares and the open areas smooshed (technical term) with 18-month old brazilwood sawdust goo that I’ve been saving. I have a bucket of it and it barely went mouldy at all. Still smells kind of woodsy in fact. This scarf also was wrapped and steamed in the same pot with the others. However it now needs another layer of something else because I think it’s kind of boring as-is. Maybe logwood or lac or ? More on that when it happens.

What else? While D was preparing for one of her classes, I managed to make a new cover for my sleeveboard: 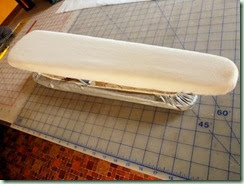 The old silvery one was completely thrashed. Unfortunately I’m not sure I’m happy with this plain muslin one I made. It’s already getting grubby and I haven’t even used it yet! But it will be easy enough to make another layer to cover this one if it annoys me enough. I also used 2 layers of cotton quilt batting underneath instead of reusing the horrible foam padding and it’s much nicer. Obviously I didn’t do the smaller board mostly because it’s not quite worn out yet. Probably because I prefer the longer one instead so I rarely use it. I’ve had this beast for decades so it has actually held up pretty well all this time. Now it’s good for awhile longer.

Oh and I guess you want to see what I got at the Circle Craft Christmas Market, don’t you? It was a really good show with 300 vendors and so took us about 6 hours to see everything. Sis, T-Man and I were exhausted! I finally succumbed to the Shopping Fever and bought a jacket from the Chrzaszcz booth. I’ve always admired her lovely hand-dyed, discharged and sewn Polish linen clothing but never found the exact right piece before. Now that Maria is retiring from the business I had one last chance and found this lovely crushed jacket: 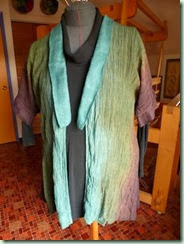 As always this photo of the jacket on Debbie just doesn’t do it justice. The colours are deeper, the shape is flattering and it fits me perfectly – which is amazing and probably the main reason I could not resist bringing it home! Besides I love linen. A lot.

You might be able to discern a black top under the jacket. This was purchased during our sisterly shopping trip to the Sally Ann. It’s a lovely heavy acetate knit and because it needs a little refashioning around the sleeve caps, I’ll get back to you on it in a later post.

Back to the Market. I also bought some of my favourite Sea to Sky salt from Maison Coté. Jean-Pierre is very funny and happy-go-lucky and I love many (but not all) of his salt, pepper and spice mixes.  They are also occasionally found at Granville Island Market or one of the farmer’s markets locally but I was totally out of the salt and sadly so were they the last time I saw them. I have lots now! (There’s a photo of him in his CCCM booth on their blog here.)

And lastly we had one more shopping item on the list: breakfast/lunch bowls. After hunting all over the Market we went back to Mud Sweat and Tears booth where we first saw these: 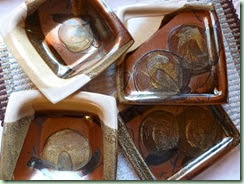 Yes, T and I decided that we had to get the plates as well! I like the square shapes and the fact that they are not identical but each piece has its own personality. They’re stoneware and quite strong, ok for microwave etc. Hopefully they should serve us well for many years.

While I’m on the subject of the Circle Craft Christmas Market, I’d like to say that I thought there were a lot of really nice items there this year and I know most vendors did really well in sales. But I have no idea how people can buy some of these things for other people, aka gifts. Unless like us, they were buying for themselves? The clothes especially were quite wonderful but very specific non-mainstream  creative styles and sizes and really needed to be tried on. Many were one-offs and there would be no chance of exchanging for a different size or colour if it didn’t please the recipient. This goes for the hats too. I tried on quite a few of them and only one looked any good. And I wear hats a lot! Also I didn’t buy it anyway.

Another thought that occurred to me as we wandered around is that the clothing reflected the designer – not just in style but in body shape. Tall thin designer = long skinny garments. Short older designer = garments that were looser and looked good on more body types. I’ve long held the notion that they (consciously or unconsciously) design for themselves first. Not a problem if you’re selling in the right venue. However judging by the demographic of the buyers, the thin young styles may not be reaching their target market. Attendees were mainly older women. More like me – though probably with more disposable income than I have. Maybe not as brave sartorially though. Heh.

Anything else? I’ve been slowly plugging away at not one, not two, but three knitting projects. None of which are both mindless and portable. Just portable and needing good light or portable and needing concentration or mindless but oversized with a giant cone of yarn to carry about. Bad planning on my part I know.

No new sewing (yet) but grandbeastie Princess Silver Fang was over and we got her t-shirt cut out. She also drew and cut out the skull she wants to stick on the front of it. Sewing will have to wait for another visit. It’s kind of creepy-cute so far. I’ll try to get more photos.

LOVE THE STONEWARE PLATES!!! One of these years, I'll have to make the sale . . .

They are kind of cool in a '70's sorta way! Glad you like them. Yes, you should go - even just to ogle. Now you have a whole year to get better and save up, right?