Return of the Sewjo

I knew that all it would take is a resorting of my patterns and fabrics to get me back in the mood. My sewing space ended up looking like this for a couple of days: 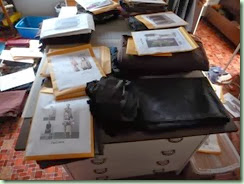 So many possibilities; so little time.

Am I the only one who takes so long to sew up the fabric stash that the plans for any particular piece might change several times before actually being sewn up? I’ve got stuff that goes back decades! Literally. Luckily most fabric doesn’t go bad. And obviously I have enough storage spaces for it all. Enough spaces that I can actually misplace things. Having an inventory list doesn’t help either. I have to feel the fabric to know what it wants to be. And then by the time I get around to it – it wants to be something else instead! I guess in the scheme of things it doesn’t really matter as long as it finally becomes something that I’ll actually wear, right?

Of course clothing styles are always shifting and even though I don’t really follow trends they do influence my eye to a certain extent. Plus being a certain age and body type along with living a pretty casual lifestyle means that some things are just not appropriate or useful for me. On the other hand, what I wear is not being dictated by anyone else but me. Believe me, I so appreciate that fact! I find most business attire as hideous and restrictive as my old Catholic school uniforms.

So, after ploughing my way happily through those piles I’ve already cut out a new version of Marcy Tilton’s Vogue 8876: 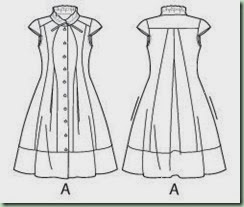 This pattern looks fabulous in every version I’ve seen and on every body shape and age! And it’s just off the fashion trend path far enough that it shouldn’t look out of style any time soon. The one I’m making this time is going to be more of a vest inspired after seeing a version on Pattern Review where someone had left off the lower band and sleeves. I have some gorgeous stretch wool fabric (purchased at one of my Portland fabric shopping forays) in a marled taupe. This is one of the pieces I referred to above that has changed its mind several times about what it wants to be. Now it’s permanently committed because I’ve already cut it out! Mwa-ha-haaa! That was quick and easy since the pattern had already been altered and fitted to me when I made my Stormy Dress. Though I will admit it was a little nerve-wracking to chop into $50 worth of cloth!

Now I have probably a hundred spools of sewing thread in my stash but none that remotely matches this taupe shade. Also there aren’t 10 matching buttons that will work either so this project is on hold until I can get to Dressew. In the meanwhile I’ve started to work on another Tilton, this time Katherine Tilton’s Butterick 5891 View C:

I have no idea why I bought this pattern as a download. Doh. That was early last summer when I was in a hurry and hoping to sew up View A before we headed off on the Great Trek. Didn’t happen. Though I did get all the gazillion pages printed out. Yesterday I taped them all together and now I need to trace off my combo of sizes which will probably be an 8 at the neck and shoulders and morphing into somewhere between a 12 and a 14 at the sides. The shoulder width even for the size 8 is huge – over 2” wider than my basic block – but apparently it’s supposed to hang off the shoulder point somewhat. So I’ll take it in about half of the overhang and I might raise the underarm area a little as well, shaving the same amount off the upper sleeve seams. I hope that will work OK. I’m not really in the mood to muslin this beast first. I want it to fit without being too oversized on me. At least it’s much easier to trace a pattern off the thick paper rather than tissue. I’m not going to cut into the paper because I can’t save the files to my own computer and who knows for how long I’ll have access to this pattern and how many times they’ll allow me to print it. I’m keeping it in it’s original condition just in case.

The fabric I plan for this jacket is a thick but very drapey cotton twill in brown/black. Also from one of the Portland fabric outlets. The pattern says it’s not suitable for obvious diagonals but this twill is quite subtle and I hope it will be ok. On such a funky style I’m sure it won’t matter anyhow. My real concern is the thickness especially around the neckline area where many seams converge. And I want to bind that seam somehow because the pattern direction leaves it rather unfinished. We’ll see when I get that far.

There’s lots more in the sewing queue. Some of it was already there but other stuff got bumped over it in line. For obvious reasons I’ve put the summer stuff on the back burner! Right now I’m into layers.

In other news, Princess Silver Fang seems to have lost her sewjo too so her T-shirt is still languishing. She decided she’d rather go down to Grampa’s studio and play with wood and his sharp tools instead of mine. Her brother Stargazer played happily with the Lego. At least when they weren’t tumbling about fighting like puppies! I would have thought they’d be easier to have overnight at their ages but apparently annoying the heck out of each other (and their grandparents) was far more important than listening and behaving. Good thing it was a short stay this time!

Knitting projects are coming along but slowly. More anon.

I love that Marcy Tilton dress - thanks to your recommendation I'm going to try to pick up the pattern tomorrow on my way to Victoria.

Just a warning: as is common with Tilton Sisters' patterns, there are many pieces and they are unusual shapes. Not an easy sew but a worthwhile one!