The year is slipping away so very quickly! Tomorrow is the littlest grandbeastie Rosebud’s third birthday. Already! She is a happy little darling with a great sense of humour and such fun to play with. We’re heading over to her house today for her party since tomorrow is a work day. Just a small family gathering while they can still avoid the crazy child-filled ones that will be demanded once she’s old enough to know the difference. Yes, we broke down and bought a toy. Which reminds me – I have to wrap it still.

Mostly I’ve been spending quality time in the studio playing with patterns and cutting out fabrics. So far I’ve cut out 3 garments and finished tracing and adjusting the pattern for a 4th one. The piles are building up ready to sew: 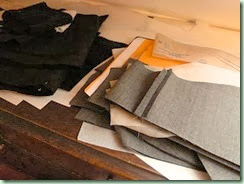 The one on the right, the vest version of the V8876 Marcy Tilton dress didn’t go off without a small hitch as you can see by the visible seam showing on the top of the pile. I forgot to cut the front pattern pieces out twice to create facings. Oops. Because I only had small scraps left I had to piece the facings making sure not to have seams anywhere that interferes with the buttons and buttonholes. At least they will be hidden on the inside. One crisis averted.

The pile on the left is the B5891 Katherine Tilton View C/D (which are identical as far as I can tell so why the double view numbers?). The pattern calls it a top but in my heavy but very soft and drapey brushed cotton twill it will definitely be more like an unlined jacket. I was more careful when doing my fit adjustments and figured out that the shoulders weren’t quite as oversized as I had first thought. I shaved off a 5/8” off the size 8 armscye at the shoulder and raised the armhole 1/2”, sloped the front shoulder 1/4” and morphed the size 8 out to the 14 at the underarm. Of course the sleeve had to be adjusted similarly. I also lengthened the body pieces by 1” though it’s actually much longer on me than the model on the envelope. (I so wish they would use more normally-proportioned models!) I like that there’s pretty much no ease in the sleeve cap which you don’t need with a slightly dropped shoulder. This fitting process sounds complicated but it really is getting much easier now that I’ve had more practice! I had plenty of fabric to cut it out but this time I nearly forgot to cut the second set of pockets. Sheesh.

While I had my home-printed pattern sheets out and flat I decided to carry on and trace the pieces for View A/B (which differ only in the use of contrasting fabrics for View A). There are an amazing 15 pattern pieces for this top! Ya gotta love the asymmetry, doncha? Took ages to trace but the fit adjustments were similar to the other view. Of course I had the fabrics all picked out already so I started cutting this one out too even though it probably isn’t seasonally appropriate. For the main body of the top I used the indigo batik left over from my Minoru Jacket lining: 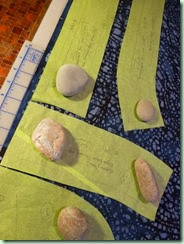 I had plenty and there are still pieces left over (leftover-leftovers) for something home-dec-y. The contrast pieces (I chose the peplums and the collar for the contrast) were originally planned for a warm red quilt fabric scrap but I realised that the reverse side was not attractive and that it would probably show too much. So I scouted the stash and came up with a vintage blue-black tablecloth (gifted to me years ago by T’s very elderly auntie) for my contrast. I think it’s cotton and it has a very nice well-washed texture. It’ll probably be a more wearable colour as well as a better weight and drape for the peplum. Like several others who’ve made this top, I cut out the collar pieces double to self-line them.

I was hoping to get this skirt from the book Shape Shape 2 out of the remainder of the tablecloth: 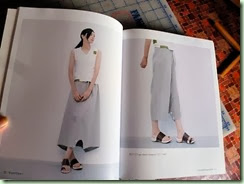 It’s convertible from a skirt to harem pants with buttons and I think it’s very cute in that Japanese minimalist sort of way. I’ve traced off the pattern and had to grade up from size L slightly to be able to get it over my hips. However, I sadly don’t think it’s going to work on the tablecloth fabric and I’ll have to hunt for something else appropriate for this pattern. I already suspect that any of my Marcy Tilton pants will also take up too much fabric. In which case I’ll try instead to create something Tilton-esque: a pair of loose pants with either tucks or pleating at the cuffs. I’m thinking of using the perfect easy pattern that I’ve already used for my Pettipants (aka bifurcated slip) from the Simple Modern Sewing book. This will be perhaps the 4th garment out of this book which is a definite keeper!

So I’ve got plenty more in the pipeline. I started to look at yet another Tilton, this one the now-out-of-print V8752: 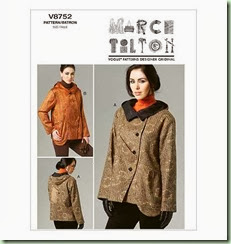 I got as far as ironing and separating all the gazillion pattern pieces for this thing. Maybe you can see it all better in the line drawing: 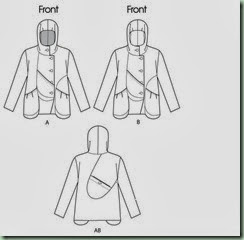 Everything is asymmetrical and pieced. I think I have the 3 different fabrics: main, contrast (for hood lining and front facings) and lining – though it might be a squeeze to cut them out. There are 4 huge pockets, 3 of them with gussets, and a hood. And I will need to do all my usual fitting adjustments: narrow sloping shoulders, narrow upper chest and wider body, and short arms. Right about there I kind of blanked out and put the pieces aside. Perhaps I should actually sew something together first?

Wow, aren't you amazing! I'm so impressed with how organized and resourceful you are with your sewing projects.

Fun plans, and projects in the works!

Ha-ha! I'm not really organised - it's an optical illusion. I get totally sidetracked halfway through and just follow my nose onto the next thing. Always have fun though!