Winter Solstice (for us in the Northern Hemisphere) happened at 9:11 PST this morning. It’s feeling rather winter-ish around here especially after it snowed yesterday: 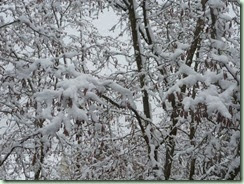 Not unusual for the rest of Canada but for the Vancouver Lower Mainland, it’s either a treat or a nightmare! One’s enjoyment – or not – is usually dictated by one’s age. The kids dash out to sled and make snow angels and snowmen quickly before it all disappears. Grownups complain about having to shovel the sidewalks and travel anywhere. We are not good in snow here. Streets and walks don’t get cleaned properly and nobody knows how to drive on slippery streets. Mostly folks just hope it’ll go away soon. And it usually does.

Backing up a little, on Tuesday we brought a fresh tree to our son The Ninja’s house. His poor abused back was feeling a little better. (He somehow managed to put it out with a sneeze! Yikes!) Everyone got into the decorating including Princess Silver Fang who had more fun decorating herself with lights and tinsel garlands. Too funny! Her little brother Stargazer was very excited and started hanging things on before the tree was even secured in its stand. He was quite concerned that Santa wouldn’t know where to put the gifts if they didn’t have a Christmas tree for him. Glad we could help.

Thursday was our annual weavers & spinners guild Christmas party. We had a yummy potluck featuring sweet and savoury finger foods. I brought salmon lox to try to provide a nice protein contrast to all the pastries and shortbread offerings. Of course I ate some of those as well! We also had our usual show-and-tell and then a fun gift exchange. My eco-printed scarf went to a new and very enthusiastic guild member and in exchange I got this lovely temari ball in its own little box and gift bag: 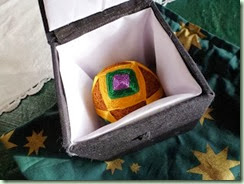 It has a string too so I can hang it up to be admired. Perfect sunny colours for Solstice, doncha think?

Haven’t really done anything else exciting. Yesterday I spent some quiet time reading. Then went to work in the studio for some sewing. It was extra dark in there because the snow covered my two small skylights! I had to turn every light in the room on to see what I was doing. I did figure out how to hem my sleeveless jacket/vest thing. All it took was a fresh brain. But I don’t have a photo of my solution yet. See above comment on – you-know – dark and all. Tilton, that thing has a lot of pieces to it! I’m still only about half finished now. So many seams to join and finish. Love the results though so it’s definitely worth it. You really have to enjoy the process as much as the Finished Object.

Our Solstice Dinner isn’t until tomorrow at Milady Daughter’s house. Then Christmas Dinner at T’s younger brother’s. I used to call him The Coach but since he’s retired from soccer coaching now I’m going to have to find him a new moniker. “Baby Bro” just makes him cranky!

Even though it’s melting now, here’s some more snow to get you in the Holiday mood. Poor rhododendrons! 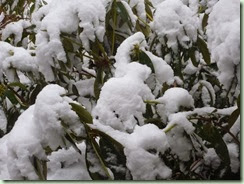 I loved our little snow storm but then I didn't have to go out in it & have good snow tires if I have to. One thing about the old home office is that you DON'T have to commute!! Out on Saturday though - what a zoo in Langley!!! the traffic jam around the big Mall was ridiculous!! Unfortunately, I had to get a specialty part for my old neighbor's trailer - no heat - or I wouldn't have been there either!!! Hope you had a good Solstice.

We had snow on Gabriola too, but it's all gone now. When going through my stash yesterday I came across a bit of cloth that has "Damselfly" written all over it. (Not literally!) I'd love to pop it in the mail for you, can you email me your mailing address? true(underscore)stitches(at)yahoo(dot)ca

I saw you over at Pao's and wanted to say hello! The snow looks beautiful. I miss it since it rarely snows in Georgia. I lived in very snowy places before my move here and it still seems odd.

I've been sewing some, cooking a lot, and waiting for my Inspiration Goddess to return when all the holiday uproar subsides.

Have a wonderful weekend!! XXOO

Hi Jean! It really doesn't snow very often here either. They call this part of Canada the Wet Coast. Or the Banana Belt. Or even Lotus Land! Take of that what you will. ;)

Hope your Inspiration Goddess makes a happy return! You always do such lovely things with her.