Oh hello! Unlike most people this time of year, it hasn’t been particularly busy in Damselfly’s Pond. I just haven’t had anything very interesting to report! I figured that I’d better say something though or you might think I’ve gone AWOL. So here in no particular order are my items du jour.

I’ve been working a little in the studio sewing my vest/tunic version of Marcy Tilton’s V8876 in taupe wool/lycra. It’s coming along quite nicely but I’m having difficulty figuring out how to hem it without it looking tacky. The original version has a huge hem band and facing but mine leaves that off. The fabric is a little too thick to turn up smoothly where the fabric is doubled at the front facings. I’ll figure it out somehow. I just have to be fresh before I tackle it again.

As always, I’m knitting socks. Two pairs are on the go this time and I’m squeaking down the feet on the Retro Ribs. As long as I can see what I’m doing they’re going much better than the top parts. Only the instep is in pattern so I can cruise in stockinette on the soles.

The second pair is just a plain pair for T. I’ve noticed that my Blackthorn carbon fibre dpns are now much less “skritchy” than they used to be. I’ve knit quite a few pairs with them and it seems to have smoothed out the surface. However using them has also blunted the nice sharp points. See for yourself: 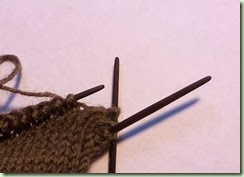 I prefer pointy points but the more rounded ones seem to be working fine for plain knitting. I really wouldn’t have thought that they would reshape themselves so dramatically with use! Just a head’s up if you were considering these rather pricey sticks. They certainly don’t bend or break easily so they are very durable in that sense. I could sharpen them up again but I think I’ll just leave them alone for now. Unless they get too blunt.

What else? Oh yeah, I had to get a new power cord/adapter/charger thingie for my poor little netbook computer, Bluet. The old one has been flaky for at least a year as a wire was breaking right near the plug that goes into the jack. It finally kicked the proverbial bucket and I was forced to find a universal system to replace my old one. It included 13 different tips out of which I (of course!) only needed one. At least it works and now I’m back in business. And I’m hanging on to the other tips since I can pretty much guarantee that it will last longer than the elderly computer it’s plugged into.

Then yesterday we walked downtown and went to see the Hobbit movie. Excellent as expected! Smaug was particularly awesome. However I do get a little annoyed when the action veers off into crazy videogame territory. I prefer it when at least some of the natural laws like gravity, temperature and speed aren’t so blatantly ignored in favour of upping the excitement level. I do like a tad more verisimilitude even in my fantasies. On the other hand I have no problem with changes in the story line from the book. Adding a kickass elf maiden was a welcome idea. Tolkien was very remiss in the strong female character department. Go Tauriel! Now I’m just sad that I have to wait Another Whole Year for the rest of the story. Pooh.

The weather is lovely today, sunny and not very cold at all. We’ll be going for another walk. I’m desperate for a haircut! Then it’s off to find a Christmas tree for the Larger Grandbeasties. Their daddy has been ill and their mom doesn’t drive so they still don’t have one. It’ll be fun to help set it up. Apart from putting up lights we never got around to decorating here. I think it takes a few excited kids to get into the Holiday mood, doncha think?

How about using seam binding for the hem? I made a cotton dress out of the same pattern and I just love how it fits. (You could see it on my Clothes for Fall page.) I love Tilton patterns!

No decorating here either. No interest in it. There's enough of it everywhere you look.

You've certainly been knitting away.

How cool to know that "nui" means stitching in Japanese. Do you do boro type work at all?

Seam binding might be a good idea - if I had any. Currently we have a bunch of new snow and nothing will get me to go anywhere for the next couple of days until it either gets cleared or more likely melts. Very festive though!

Nope, no boro stitching here. Love the look but to actually do it is more boring than it is boro! LOL!! Anything I've ever started has never gotten finished, even some stitched tie-dye samples (aka "nui shibori").

Don't you make your own seam binding? It's much more fun with the fabrics you have on hand, than buying the boring ones from the store.