Yes, there has been a m*th incident here! Yikes! What a lot of work to attempt to clean up and contain the problem. I am grateful that (touch wood) it was contained to our small front hall where there is a hat/umbrella stand and a coat closet. Unfortunately however this is where I store the majority of my wearable woollies! We lost several hats and a wool bag from the hat stand where the infestation was worst but an angora scarf and a couple of pairs of older gloves in were also attacked in the closet. They’ve been disposed of and now the rest of the items are going through a couple of cycles of Arctic Vacation in the big chest freezer. Hope I don’t need any hats, shawls or mitts in the next couple of weeks or I’ll be digging them out of the deep freeze.

It’s unbelievable how much time it takes to go through everything with a careful eye, vacuum like crazy and wash down all the surfaces. Even in a small space like our front hall. I’m still not finished yet and I’ve already spent 2 long sessions at it. I wanted to go through my clothes again but not with this kind of impetus making me do it Right Now! Whew. As soon as I finish the hall of course I’m going to need to go check the spinning stash in the attic which is an even bigger job. On the positive side it’ll give me a chance to do a better job of inventorying everything again. I’ve found a good way to do that in Evernote with my iTouch which includes quick photos. I already had an inventory in Excel but it didn’t include pictures and it’s sadly out of date. Since I’m trying to not buy anything new, it seems like a reminder of what I already own will help me to shop better in my own stash. I’ve even done some spinning. Look! 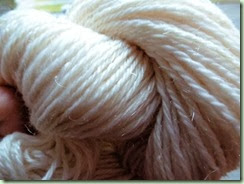 OK, truthfully I really only chain-plied this 100g skein of NZ crossbred wool and angelina fibre. The spinning was done ages ago (years!) during several spinning demos and it looks it – uneven twist and drifting from thicker to finer. However it’s pretty and very soft and worsted weight so I’m going to throw it in a dyepot (have you ever known me to wear anything white?) and knit a cowl. There’s plenty for the Bandana Cowl from Purl Bee. It calls for chunky but this isn’t quite that thick. Hopefully it will work anyway because although I can double it, I don’t want to because I’m afraid I’ll run out of yarn. There’s only about 200 yards and no more is possible if I dye it first. Of course I could dye it after, couldn’t I? But then I’d have to knit boring white. It was bad enough just plying it. Why do you suppose it hung about for so long untouched?

Moving right along. After stalling a number of times I finally finished the last sewing project: 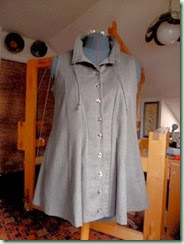 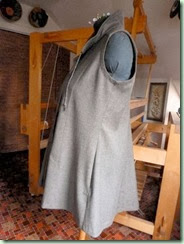 Fabric:  wool and lycra stretch woven, tweedy taupe (not gray, not brown but in between), 56” wide by 2 yards, pre-finished by machine wash and dry.

Pattern:  Marcy Tilton V8876, View A minus the cap sleeves and hem band. 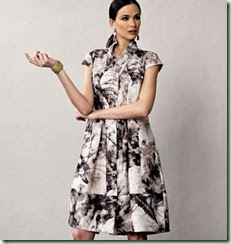 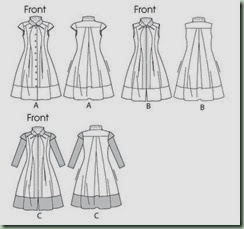 Comments:  I was inspired to make this sleeveless jacket or vest by Patti B’s version on Pattern Review. I didn’t use a zipper though but instead did the button front. Actually I kind of like the zipper version too but I wanted the contrast of the coppery buttons and beads on the drawstring. I couldn’t find a zipper that worked. I had trouble enough just matching the thread.

This was kind of an easy make in that I already did all the pattern fitting for my Stormy Dress. I had a little oops moment when I realised I’d forgotten to cut out 4 centre front pieces but managed to piece together enough to get the facings cut out. Since this jacket is never worn open the seams don’t show at all. I had a little trouble as I’ve already mentioned in another post with picking out the armhole facings’ machine topstitching and hand-stitching them instead. I also hand-stitched the voluminous hem. I think the lack of topstitching looks quite elegant. All the inner raw edges are serged. I ended up sewing the buttonholes from the wrong side because for some reason I can’t get the tension right on them and they look much better on the bottom. If you can’t beat ’em, join ’em.

This fabric sews and presses like a dream though it unfortunately does crease with sitting somewhat. The photos don’t really show the colour very accurately. Now that I’ve harshly pre-finished it I’ll wash it on delicate and hang to dry in future.

I’ve already worn it several times and was wondering what coat would work over it until I discovered my ancient Issey Miyaki kimono-esque jacket (Vogue Individualist 1693, from 1986) works great. I love this light jacket and get compliments on it every time I wear it even if it is nearly 30 years old! Just shows you that some garments never go out of style, huh?

So what’s next? After so much Tilton sewing I need a little palate-cleanser of something simple with only a few pieces. So I’m working on this: 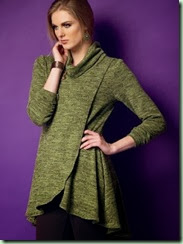 I love the cosy tailcoat look of this Butterick 5954 View D. Pattern Review was unanimously pleased with this pattern but advised wearing a camisole or something underneath in case it falls open too much. I’m using my own basic block to cut the shoulders, armholes and sleeves so I know it will fit me in those critical places then morphing into a size M at the waist and cutting a size S neckline and collar. Sounds wacky but it works for me. I’m making it in a brown sueded jersey that has changed its mind several times on what it wanted to become. Even though this fabric is ridiculously wide I still didn’t have enough to cut these huge triangular pieces with the nap. Besides it’s such a waste of fabric! I don’t think the nap will show significantly anyhow. It is quite off-grain though and refuses to fold correctly so I’m going to cut each piece individually one at a time. It’s supposed to be an easy make, right? Right? If I like this style there are several other versions to try including a lightweight short-sleeved or sleeveless version for summer.

Meanwhile it’s back to the Battle of the M*ths! Ergh…More anon.

Angora is m**th bait! Unfortunately they just have that as an appetizer before chowing down on the woolies. My heartfelt sympathies. And the jacket looks great - how 'bout a pic with you modeling it with the Miyake top?