Attempting To Make Up Lost Time

I haven’t managed to get back up to my studio yet. Yesterday, since I was feeling so much better, ended up becoming a gardening day instead of a sewing day. I got the pea nets replaced with Thom’s help (he wielded the staple gun!) and some bird netting over the emerging pea seedlings. Yes, the birds tend to munch them off if they aren’t protected at least until they are bigger and tougher. Birds like their fresh salads too you know! Years ago I didn’t really believe it was birds that were decimating my peas. I thought it might be slugs, the bane of Wet Coast gardens, until I saw the triangular bites in the leaves. Bird-beak shaped bites. Grrr…

I also got a lot more of my seedlings transplanted into larger flats. Though I still haven’t gotten the first bunch of transplants into the garden yet! At least they are fine in the greenhouse at night and out on the deck in the daytime. The newest transplants still have to come back into the house each night since it’s a little too chilly for them yet. Surprisingly I had such good germination with my Japanese indigo seeds from last October that I ended up with too many seedlings! I figure 24 plants is plenty for this year’s dyeing plus the 7 or 8 woad plants. That should be plenty of blue to play with! I also transplanted my coreopsis (yellows, golds and rusty oranges), lobelias (both trailing and not) and some cabbages. Next I need to deal with the tomatoes, coleus, red alyssum and sunflowers. And finally plant the cucumbers and squashes seeds. I keep forgetting them, poor things, but there’s still time. When the weather was so warm the other day (18C) I thought I was getting behind but it’s much cooler today. I’m just rushing the season a little I think. Relax, damselfly.

Meanwhile back in the studio, I forgot show you the patterns I got from the last time I hiccupped and I fell for a BMV sale. 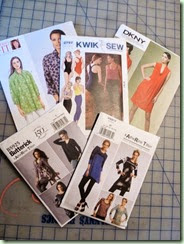 That’s 2 more Tiltons (Katherine this time), a Sandra Betzina, a DKNY and my very first Kwik-Sew ever. I liked the pockets on the first Katherine top and the colour blocking and tunic shape on the second one. They are a little older and I was afraid they’d go out of print soon so snatched them while I could. The Today’s Fit shirt/jacket has a great pleated collar and raglan sleeves which I’d love to learn how to fit on me. I like some of Sandra’s designs but haven’t actually sewn any of them yet. The DKNY dress has a really nice low cowl but I’m not sure if the pleats will look too maternal on my fluffy middle. I’ll have to test it with cheaper fabric just in case. It also needs sleeves, at least cap sleeves. I’m dying to test the fit of the leggings in the Kwik-Sew. (Does that cutesy spelling make you cringe as much as it does me?) This will probably be the first thing that gets sewn out of this pile. Also the leotard, particularly the view with the racer back, has some potential as bathing suit/camisole fodder. You know I never sew anything straight up! That’s why it’s so much fun.

Well obviously nothing crafty is going to be happening while I’m sitting here typing this, is it? Best get a move on. More soonest.

I have had pretty good luck with Kwik-Sew patterns. (Yes, the name is terribly dated, but at least it means they have been around for a long time.)
Your garden sounds like it's way ahead of mine.