Back In The Saddle

Well, whatever that bug was that I had is now gone without a trace. Not even the cough left. Sheesh! That was such a waste of time! Thank you to all those who wished me well. I’m sure it helped with the Bug Begone!

Since I was feeling somewhat restored yesterday, I ignored the lovely warm day and went up to the studio to carry on with the Marcy Tilton Skirt V8499 that had been languishing for weeks. While out of commission I had been doing some reading on underling and found this nifty method of underling and enclosing the seam edges at the same time. I made a little sample: 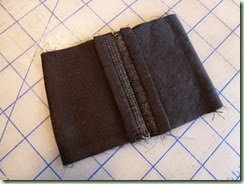 Yeah, I didn’t match the subtle plaid but accidentally flipped one side before sewing the seam. It’s a sample, people! This technique only works for the long vertical seams but it works great. What you do is cut the underlining with the vertical seam allowances 5/8” wider (i.e. for a 5/8” seam, cut 1-1/4” allowances). Then sew each main fashion fabric piece and its matching underlining right sides together with a 1/4” seam (note they won’t lie flat because the underlining is larger), flip them right side out and press. The underlining folds neatly over encasing the seam edge. You can also baste the horizontal edges if necessary to keep them in place. Thereafter you treat each double-layered piece as one and sew the garment normally. And there ya go! Faux French seams. ETA: Oops. That was incorrect. It's really a faux Hong Kong seam finish.

This skirt has giant pocket bags as you can see here: 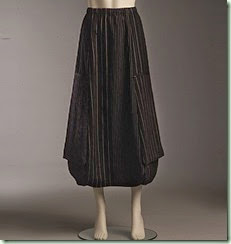 I decided not to use zippers on the upper edges but to make button plackets instead. I had to pick out some of the wee bit of stitching that I had already done on the pockets and then I underlined them. Since the vertical edges of the pockets are to be incorporated into the side pieces anyway, I just underlined them normally to the edge and tucked the trimmed top and bottom edges into the hems: 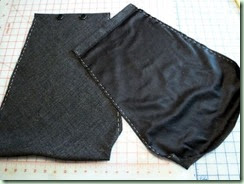 The outer pocket fabric is cut on the bias but the cotton sateen underlining is on the straight grain. This should help it keep its shape better. I did a lot of hand-basting, some of which will be permanent and some that will be removed before sewing the front side underlinings on. I don’t usually thread-baste and it’s probably overkill but I just wanted to make sure nothing was going to shift. The 2 buttons in the photo are just sitting on top of their buttonholes to see what the effect is. I’m actually quite pleased with the hand of the underlined wool fabric and it is properly opaque now. It has a bit more body and less cling. It still creases too easily but maybe not quite so much as before.

Underneath those big pockets I decided to put a small patch pocket situated close to the top so I could get at it easily. I was afraid that anything you put into the main pocket would be lost awayyyy downnnnn at the bottom! Yes, I actually use my pockets. Don’t you? Hmmm…I just realised that I’m going to have to sew the patch pockets to the side fronts before I put on the big pockets and stitch the underlining on. I was hoping to stitch them through the underlining as well but if I try to stitch them after attaching it the main pocket will probably be in the way. These little problems are what I get for re-engineering the original pattern, huh? Sometimes you don’t notice the assembly details until you get there.

So anyhow that’s as far as I got yesterday: cutting out the skirt underlining and completing the pockets. Is it ever going to be finished? Today though I have to get out to the garden and get some work done there while the weather is good. The peas are coming up and their nets are not ready for them yet. We’re replacing them this year as the ancient originals are really disintegrating. I actually discovered that we already had some netting in the cupboard under the grow-op when I cleaned it out so we didn’t even have to buy any! Totally worth the clean-up, I’d say. You never know what useful things you’ll find. Or total garbage too for that matter.

And now for something completely different, check out the cute animation that Thom found whilst wandering around the interwebs. Yes, we are total Westie geeks. After last year’s cross-country trip, you had to have noticed! Though we actually had 9 guys pushing our van into the repair bay in Ottawa. (My heroes!) Sadly she’s currently still limping and needs a transmission job. Soon, my pretty.

Off to have some lunch before trudging out to the Back 40 for some hands-in-the-dirt time. (That’s 40 feet – not acres!) Later, darlings.

I'll confess I don't have the bandwidth in the moment to digest all the directions, but it sounds great and I love that skirt!! Glad you're feeling better. I'll try to revisit when I have half a brain. XXOO

Glad to hear you are feeling better and back in your sewing room. Keep plugging away at that skirt and it will be done in no time!

Thanks for the encouragement, m'dears! And lovely to hear from you. I've missed your blog posts, Dixie!