Which Came First, The Bunny Or The Eggs?

Happy Easter or whatever you might celebrate – even if it’s just a long weekend off work! Here in Damselfly’s Pond Easter isn’t really a big deal. When our kids were young we usually were out on our little sailboat (think seagoing camper van) and hiding chocolate eggs in our boots was as exciting as it got. Later when they were grown somebody (that would usually be me) might occasionally throw a family dinner but not often. These days they have their own kids and get to hide their own eggs. We won’t even be seeing any of them this weekend because they are all busy with their own families. I don’t mind. I can always find something to occupy myself. The options are many and varied.

It’s raining today anyhow. Most of my baby plants are hiding out in the greenhouse with the door shut. Yesterday was quite nice though and we got quite a lot done in the garden which is of course still our biggest ongoing spring project. The veggie patch (aka the Back 40) is nearly done: cleaned up, all the compost on, beds shaped and several already planted with my early greens. They are growing visibly by the day! I picked our first bunch of asparagus and also made the season’s first rhubarb sauce which we celebrated over vanilla ice-cream. This morning we had it on gluten-free pancakes for breakfast. Yum. Talk about celebrating the coming of spring!

Thanks to Thom the dye garden is also nearly finished being prepared. I’ve got woad, Japanese indigo, coreopsis and marigold seedlings nearly ready to join the madder already there. I’m also attempting to grow a perennial coreopsis from seed. I wanted at least 3 plants but these seeds didn’t have good germination so one is all I managed to get. I’m not growing weld at all this year because I have Way Too Much already chopped and dried and don’t need anymore for awhile. Of course they reseeded themselves anyway and we had to weed them all out. I don’t really need marigolds either but they are pretty and I grow them every year regardless. They add some welcome colour in any spot that might be looking a little bare. Please explain to me why all the many types of plants that give yellow dyes are the ones that are easiest to grow? The few that give blue are easy to grow but not easy to extract. And I only have one option for red and can only harvest the madder once every three years. The ease of obtaining a plant colour is the exact inverse to my desire for that colour! Go figure.

Anyhow, nothing much else crafty is getting done around here. No sewing. That Tilton skirt is still making me grumpy with its non-cooperation so it’s in time-out while it ponders its bad behaviour. I’ve been test-knitting a sock for Sanjo in yummy silk and wool yarn in bright red. It gave me some problems and I had to start the thing over again quite a few times before it started to go correctly. It ain’t over yet either! And I finally finished another of my endless pairs of socks: 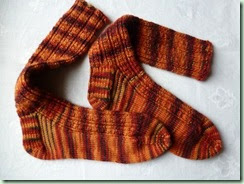 Comments:  The last time I knit this pattern it took forever! This time it went quite a bit faster because I finally had the pattern fixed in my brain. I quite like the results even in such a stripey yarn as this one. These socks are a test for the durability of the Tough Love Sock yarn. Now we’ll see how well they wear before I buy more skeins.

I also still have another skein of Tough Love Sock in the more subtle colourway Rogue (purples/stone/moss) for Thom. But I think I’m going to knit up the Gray Tabby from Ancient Arts for him first. Just trying to decide whether to make plain socks or try to incorporate some kind of rib. I still think plain knit wears better in the long run anyway.

Since I finished the above socks, I decided that even if it’s spring and the odds of an opportunity to wear gloves is slim to none I would start a new pair anyhow. I will be needing them eventually because I only have one pair left after the recent m*th incident. The yarn is some sock yarn from very deep stash, possibly DGB Confetti, in one of those ubiquitous printed stripe patterns that in a fit of pique I had overdyed with splotches of purples just to make it look different. I’m not sure it was necessarily an improvement! If I have to overdye it when it’s done to make it palatable I can do that but it seems to look better knit up than it did in the ball. These gloves will probably only use up one of the two balls but at least I have lots just in case. (And I can always make another pair for a spare.) I’m going with my usual Hooray For Me Gloves free pattern by Marnie McLean but with full fingers. I’ve knit this pattern so many times you’d think I’d have it memorised by now! It’s simple and clear and fits me nicely so why mess with a good thing? Marnie has instructions for knitting the fingers in double-knitting but I don’t mind doing them in the round the normal way. Yes, it looks like a hedgehog but that’s just fine. I’m used to manipulating my pokey sticks around safely. More on this project later. I really need to take some photos, don’t I?

It was a quiet day around here, also. I sewed most of the day.
Your socks are so colorful and bright! They'll be perfect when autumn comes around.

My post escaped a day early and it turned out not to be quite as quiet as I imagined!

Thanks for the kind comment on the socks, Dixie, but they won't be waiting for autumn! I wear those colours all year around because I love them.

I didn't even realize it was Easter until someone told me my favorite cafe would be closed until tomorrow!! No Broccoli-cheeze soup for me this week dammit. But, there's almost always another Friday, isn't there?? Spent my time researching for a paper I'm doing for a course. I'm so frustrated. I think my brain's too old for this stuff . . . now that I'm 63.

Don't you dare blame it on age, Sharon, because you are YOUNGER than I am!!! I turned 63 last November, so you can't be old because I AM NOT OLD... yet. Sorry you missed your soup though.