I’ve been obsessively diligently plugging away at the wool prep for my Rainbow Dark Sweater. Yesterday I finished spinning 2 more bobbins’ worth of singles. Now they just need to be plied for Skeins #3 & #4. I also finished up all the hackling: 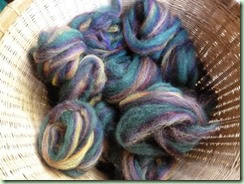 That’s the last 24 nests – 12 each for 2 bobbins’ worth which will become Skeins #5 & #6. And that’s all I’ve got so it had better be enough for the Harvest Moon cardigan pattern! I figure I need about 1300 yards total. Fingers crossed! I’ve also been working on adjusting the pattern for my size. As always I need a medium yoke area, a large bust and an extra-large hip which means some fancy mathy stuff. I also wanted the body a little longer than the 14.5” from the underarm. Luckily the sleeves are knit last on this top-down cardi so I can fudge the length if I’m running short of yarn at that point. I have short arms anyhow so I need to remove 2” from the pattern before the cuff. And they can be a little shorter still if necessary though I would rather have long sleeves on this sweater if possible. We’ll see. There’s quite a way to go yet.

I was perusing my library to see if I had any further information on techniques to use with my wool hackle. It doesn’t seem to be a common prep tool so there isn’t much available. However I found a great chapter in this book that I’ve had since 1998: 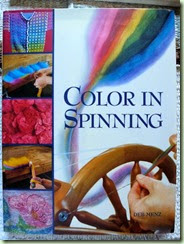 This is the older hardcover version of Color in Spinning by Deb Menz. Even the second soft cover edition is long out of print but your library (guild or public) might have a copy. It’s going for big bucks second-hand on Amazon! That’s because it’s extremely comprehensive, for example this spread: 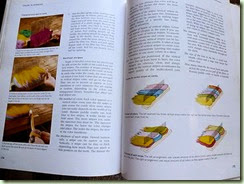 What Deb doesn’t know about colour and fibre is not worth discussing! She is amazing. Sadly I’ve not had the chance to take a workshop with her back when she was still travelling to teach but I have met her briefly. Such a lovely personality to go along with her gorgeous curly red hair! Good thing she is working with Interweave on videos so her valuable information and techniques can get out there somehow. Yes, I also have her ColorWorks book as well. It’s very helpful with colour theory as it relates to textiles but it’s a different beast. Not nearly as hands-on practical how-to – which is what I live for. Glad I bought this book way back when. I need to read it all again from cover to cover.

Some more good stuff about hackles and their uses:

Excellent PDF from Majacraft by Jenny Hart. (Also some simple uses for a diz, using wool combs and a blending board.) There’s an interesting video on blending colours with a hackle. The demonstrator does two things that I think are incorrect: she fills the hackle too full and her diz is turned the wrong way. There should be at least a finger’s width of bare tines above the fibre or you’ll find it jumping off when it’s not its turn. And the diz should be concave side towards the hackle in order to funnel the fibre into the hole. Lovely top she’s using though.

Valkyrie has a comprehensive article written by Jeannine Bakriges (aka Spinning Spider Jenny) on blending with the hackle. I covet her mother-of-pearl diz!

So I guess what this means is that I’m kind of hooked now. I’ll be using my hackle a lot more in future. Why did I wait so long to get to it? Silly me.

You're using all kinds of terminology here that is totally unfamiliar to me but I love it anyway. i love the pretty little bundles of yarn and I'm infected with your enthusiasm for the process. My creative time has been sadly lacking, so I'm thrilled to feel your energy. Makes me have something to look forward to when life shifts a bit. XXOO

Sorry, sweetie! I forget that the rest of the world doesn't spin their own yarn. I've been doing it for soooo long - since 1976 actually! I love knitting with my own handspun yarns. So much more alive and fun to knit. Anything you want to know, just ask.

XXOO to you too!

I just find it amazing you can do this stuff! Magic.