True confessions – I’m not a deep or complex thinker. I’m actually pretty WYSIWYG as a person. I don’t spend a lot of time contemplating and analysing and debating every little issue. My parents used to think I was pretty black and white in my opinions and I was when I was younger, though time and experience has greyed a lot of that oversimplified view. I’m really very positive but with a cynical side that can trip me up occasionally. I know there are always exceptions, reasons, forgiveness, overlooking of flaws and just plain humanness. (But I’d still like to smack a few people upside the head!) Mostly I try to only get worked up about things that are actually within my control. No point in stressing out over something you can’t do anything about. I try to just live my life as best I can and hope that I don’t annoy or hurt or rip off anybody else. Can’t say I always succeed! But I do try.

Well. Don’t know where the above statement issued from. I wrote it a few days ago with some kind of bee in my bonnet! But I didn’t want to waste the words as they spilled out of my head. You just never know what could be important to say. Or not.

In crafty news, I’m cruising down the last sleeve of the Rainbow Dark Cardi. I’m really happy with how it’s looking. I did have a bit of trouble with the i-cord bind-off on the cuff. I know I made a mistake but I kind of like how it turned out in the end. I didn’t start the i-cord correctly so it ended in a way that made it impossible to join into a neat circle. Instead the result is that instead of picking it all out and starting again, I ended it by tucking it under and stitching it down. It looks like the i-cord grows out of the sleeve stitches, winds around the cuff and disappears under the beginning. The second cuff will have the same mistake. It won’t be bilaterally symmetrical though but that’s ok. One of these days I’ll figure out how to do it right. Maybe. Photos to come.

And I’m planning some weaving! Yes, I’ve been hanging out in my studio attempting to get an idea together for something to go on my poor lonely barenaked loom. I need towels. To that end, I took a booklet out of my Guild library at the meeting last Thursday: 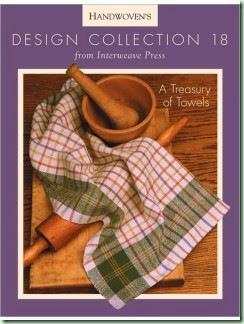 Handwoven’s Design Collection 18 – A Treasury of Towels. (If you hurry you can download a copy for $4.98.) These are all 4-shaft drafts and I realise I actually have 8 but I thought I’d start myself off easy. I’m not likely to copy anything exactly but I decided that the waffle weave towels on the back cover by Marilyn Murphy would be fun. I have a cone of natural 16/2 hemp/cotton and some fine handspun hemp/recycled blue jeans and even finer handspun organic green cotton. I’m pretty pleased with the idea of using up some ridiculously fine yarn that I spun on my little brass tahkli supported spindle years ago. No point in just admiring it in skeins, right? The Blue Blazes hemp/cotton was only a singles but I spent some time plying it up on my Louet Victoria wheel with the lace flyer. I thought that even though it’s not as fine as the other yarns it would benefit from plying for warp since it tends to pull apart somewhat easily. It actually broke a few times so it was probably a good idea even though I was originally planning to weave it single. Might have worked ok for weft but not warp. The recycled jeans waste makes it a bit lumpy and slubby. Now I’m just waiting for the handspun to dry from setting it and then I’ll get to winding a warp.

I had to recalculate the draft since it called for slightly thicker yarn. It was kind of fun trying to remember all the details like adding take-up and shrinkage and loom waste. I want 4 smallish towels that can either go on my oven door handle or in the bathroom as a hand towel. I already have a waffle weave towel that I use regularly but it was woven by a dear friend so long ago that she doesn’t even weave anymore! She paints watercolours instead.

Those ones won’t be for drying dishes. For that, I have a second plan from the same booklet. This one is a 4-shaft crackle weave and will use up some vintage cottolin and probably some 8/2 cotton when, as I suspect, I will run out of the cottolin. They’re very colourful so it doesn’t really matter if I throw in some odd lots! The original design is for “sauna towels” so I’m reducing them down to a dish towel size. Can you tell I’m having fun with the planning? I just have to get to the actual weaving part of the projects before I run out of steam.

Oh drat! I just read about a job offer that was absolutely tailor-made for me! If only I were in the market for a job. And at least a decade younger. Sweet Georgia Yarns has an opening for a studio assistant/precision dyer. I can do that. And it’s only a fairly short rapid transit ride away from me too. However, I’m rather thoroughly retired. Oh well. Someone else really smart and energetic will get the position and thrive at it. Felicia is obviously doing really well with SGY! Hurray!

We’ve been pestered by the Really Evil Raccoon again. Twice more. Thom is getting seriously tired of reassembling the water garden every morning. Tonight we have a net over the entry to the upper deck. We’ll see if it deters the beast. Yes, I know they can climb very nimbly. I’m hoping that they’re put off enough to go elsewhere rather than tackle something different that’s in their way. I’ll let you know how it goes.

Hi Louisa,
I follow your blog but seldom comment. However, the racoons will bring me out of hiding.

You can either shave the soap with a grater and sprinkle it around. Or hang it in strategic places in a mesh bag...the kind onions or lettuce comes in.

Happy weaving on those towels!

Hi Valerie! Glad you came out of hiding!

Yes, I'm pretty sure they have Irish Spring soap around still. However, it will repel ME - don't know about the raccoons! I'm really sensitive to that stuff. Ugh.

Oh and Thom says it might attract obnoxious leprechauns instead!!

My Ex was involved in a trap & neuter program for feral cats a couple of years ago. He was having problems with raccoons at the time. Seems they love cat food!! Anyway, he set out two traps one night & caught a skunk & a raccoon. It must've been mama raccoon because she was soooooo mad at being in the trap that she took her whole family elsewhere after he released her. Not a raccoon to be seen after that night. The skunk was another story. Mothballs also work to repel raccoons by the way.

Yikes! Not sure I'd want to live-trap a skunk! Even by accident. They do dig holes in my garden - deep but narrow, very distinctive. They aren't nearly the pests that raccoons are and we won't even mention the black/gray squirrels. Evil creatures. They're already clear-cutting my walnuts and they're barely past teeny. Not nearly ripe.

Moth balls are another one that would deter ME!! So toxic.

those darn racoons! I didn't know you could still buy mothballs? I had an encounter with a skunk when I was a kid in the north - once was enough.