It’s a luxury! Really. Our hot water heater has been off again/on again for the last several days. We’ve had a repair guy over 3 times and he’s replaced parts and vacuumed underneath in case dust is affecting the controller. It works ok for awhile and then conks out again. Thom even got a minor burn on his arm trying to make the darn thing cooperate. (The aloe plants came in handy.) And I bravely did 3 loads of laundry yesterday in the midst of it all. I figured cold water works fine with modern detergents and I usually rinse in cold anyhow. I refuse to shower in cold water though. I have my limits.

So what is it about mechanical things going wonky? Lately there’s been a few too many of these. Is it the heat? (It was a few degrees cooler yesterday and today it’s downright chilly in comparison.) Or just a fluke? Who knows? Hope that’s it for now though. It’s a weekend and if the hot water tank goes out again Thom promised not to call the poor guy back again until Monday. I’d better get my shower while I can, huh?

Meanwhile, the third (and last!) kumihimo class on Thursday went very well. The weather was perfect, the six participants brought their best brains and much braiding was accomplished. Sadly I only sold one kit, leaving 7 more left to clutter up the attic. Oh, well. I’m not exactly your best high-pressure salesperson anyhow. Maybe come autumn I’ll advertise in my guild newsletter.

So I was back at the loom yesterday and finished weaving the first towel. There are a gazillion repairs to make on it but that’s going to happen after I cut it off. I pulled a few of the broken ends up to the dividing line between the first and second towel so as to start the second as fresh and clean as possible. And promptly broke a green cotton thread! First one too. I hadn’t painted those threads with the flax dressing (aka snot!) because they were behaving quite well. Anyhow I think I’m going to have to cut the whole thing off when I’ve finished weaving the second towel. I have enough warp to retie back on again to weave off the last 2 towels and it would do a great deal to even out the blue jeans/hemp warps. Otherwise the tensioning water jugs threaten to end up on the floor! Simple weaving project this was Most Definitely NOT! But I’m not going to give up. I’m stubborn like that.

Here’s a shot of the cute wee Jenkins shuttle I’m using for the hems: 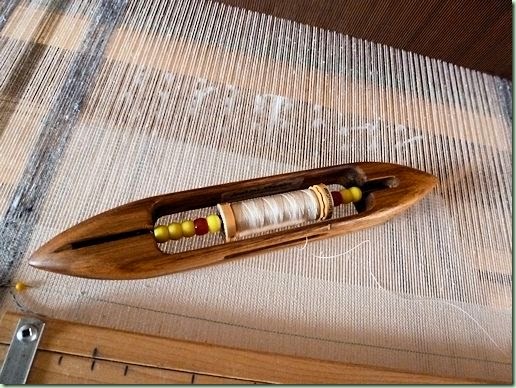 In the end I decided to go with weaving the hems in plain weave using sewing thread to see if that would keep them from ruffling quite so much. The spool is shorter than a regular weaving bobbin and was wobbling around a little too much so I used plastic beads as spacers to hold it in place. No idea when or where I bought this shuttle but it might have been at the ANWG conference in Spokane a number of years ago. I always think I’m going to remember these details but I don’t!

Ed Jenkins and his wife Wanda are a very interesting couple who live in a very small community in northern Oregon. See an article on them here. Mostly known for his lovely exotic wood Turkish spindles, Ed also makes walking wheels and other fibre tools. It seems as if he isn’t currently making shuttles any more though sadly. This might be the first time I’ve ever used this one and I quite like how it handles though I think it will really be ideal on a narrower warp. The size is somewhere between my regular Leclerc shuttles and my little Glimakra mini-shuttle, which is so small it takes paper quills instead of bobbins.

In knitting news, Thom finally finished turning me a button for my Rainbow Dark Cardi. Still have to photograph it but I’m very happy with how it turned out. Considering how much work went into it, I’d better be! All the measuring, hackling, spinning, plying, setting, recalculating, knitting, finishing and blocking – talk about your Slow Clothes! It had better last me for quite a few years now. Big thanks to Heidi Kirrmaier for her excellent Harvest Moon pattern. It was detailed, clearly written, helpful photos and relatively easy to refit to my size. It has all the elements that I love: flattering collar/yoke, single button closure, back-warming length and, best of all, pockets. The only thing I would change is to include inches as well as centimetre measurements for those of us who don’t quite think in totally metric. To be fair I also prefer patterns to include metric needle/hook sizes too. For instance, I have no idea what a size G hook looks like. But I digress…

I wonder if it’s going to rain today? If not, I need to water my dye garden. Again. And we need to go get some groceries. Hope there’s hot water for a shower first though. More soonest!

I admire your persistance. LOVE the shuttle, sadly he had stopped making them before I discovered them but I do have a kuchulu (the tiniest Turkish spindle

More like sheer pig-headed stubbornness on my part. A bunch of threads are not going to defeat me! Hah!

Oddly enough, I don't really like spinning on a Turkish spindle though there are many who disagree and love their little X-wings. I like me a good top whorl with Houndesign being my favourites.

My sympathies on the cold shower. When I lived on Lasqueti we had hot water in the winter, because of the water jacket on the wood stove, but of course we didn't use the stove in the summer. Also water was in very short supply. So I would have what I called "Screamers", because the shock of the cold water would cause me to scream. Very cathartic but not recommended.

Ick! I hate cold water to wash in. When we had a sailboat I would heat water in a black bag that we hauled up the mast. When it was warm enough we'd stand on the deck underneath it in our bathing suits for a scrub! In the van I've been known to heat water on the stove and wash in the wash pan. When desperate I can do my hair and my body in only a couple of cups of hot water. There's always a way, right?