OK, that picture you now have in your head is just icky, isn’t it? (Sorry, not sorry.) It’s been around 28C (82F) for days now and I’m feeling rather withered. And I’m not allowed to complain either because in the dark of winter I will be pining for this glorious sunshine. I understand that it’s probably hotter elsewhere. We do not have AC and for awhile there we didn’t even have hot water for a shower. Guess I could have put a bucket out in the sunshine, couldn’t I? At least the water heater is fixed now. Also the microwave is still acting wacky. It hates the heat as much as my sewing machine’s foot controller does. So I am not sewing either. Just waiting for it to cool down. It will eventually.

To catch up, Monday was Ai Dye Day. The Japanese indigo was in perfect condition to harvest some for a dye vat so I invited over 3 friends and we played with the blue: 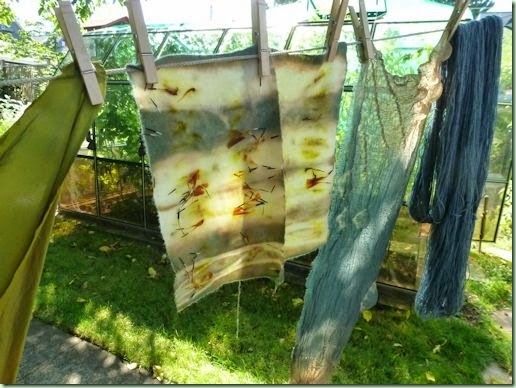 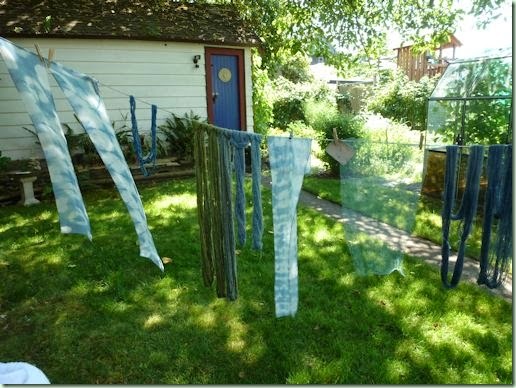 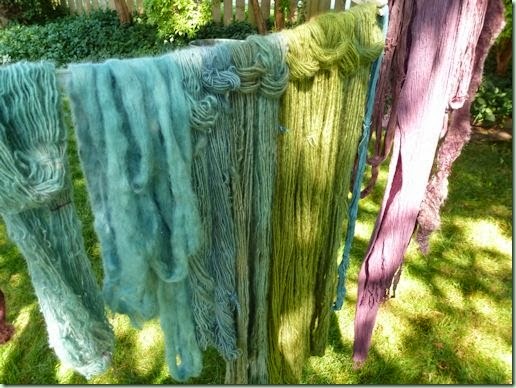 There was much dyeing and overdyeing and plucking of leaves and flower bits to augment the colours. We dyed silk scarves and handspun wool and sock yarn and gauze. I dip-dyed my piece of shibori-tied wool fabric that had already been dyed in osage/iron. Then yesterday I made a scarf-ish kind of neckpiece out of it: 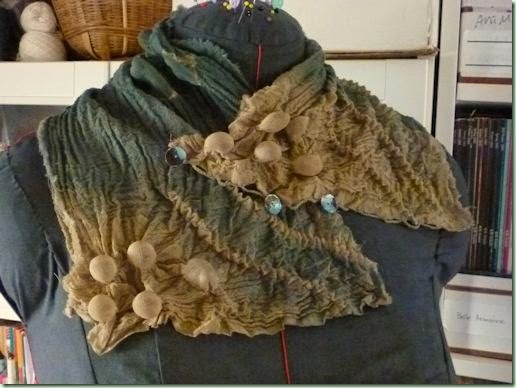 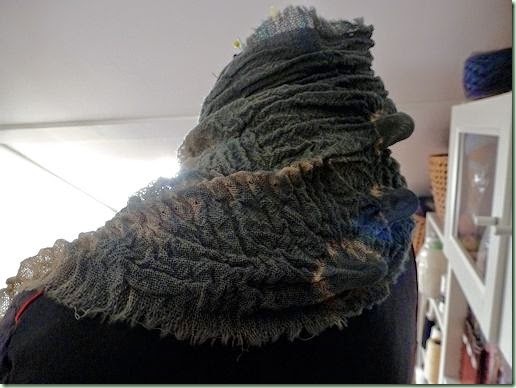 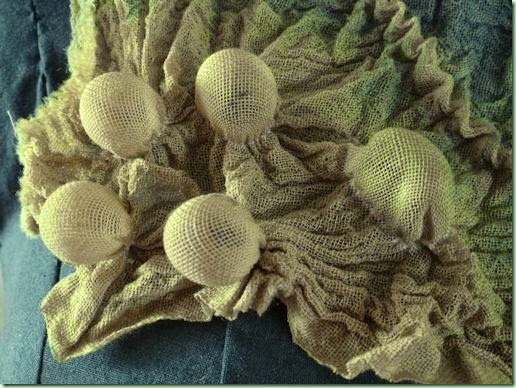 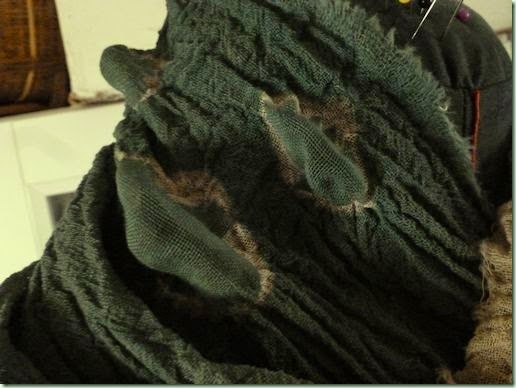 This wool fabric is woven with over-twisted yarns so that when it gets wet it crinkles up. When it was still flat I tied marbles into it and did a little maki-nui stitching. The first layer of dye was applied at our last Spectrum dye day and then dipped in our indigo vat twice. After it was dyed and mostly dry I took out the ties. Of course I forgot that it hadn’t been properly rinsed and now it can’t be wetted again or it will lose the bubbles! Oh well. I found three shell buttons and used some of my handspun green cotton to crochet a row of button loops on one end. It matches the osage/iron tan-olive quite well! I was discovering a couple of different ways to wear it but it’s too hot to play with. So Debbie Double is sporting my neckpiece which I’ve titled “Fucus” because it totally reminds me of the bladder-wrack seaweed, known in our family as poppers.

So tomorrow is my last Kumihimo Workshop. The weather might even be slightly cooler and somewhat cloudy which would be nice. I have another 5 students and 1 repeater coming. I enjoy teaching these classes but I’ll still be very happy when they’re over. I prefer more relaxed type of get-togethers like the Ai Dye Day. Not trying to stuff a bunch of information in a short time into poor overloaded heads.

I still haven’t shown you either the socks or the sweater I’ve finished. Plus the weaving which is finally going somewhat better now that I’ve got a temple that’s the right size. And I made a flax-seed gloop to paint the breaking warps with. More soonest!

This weather has been hard for me to deal with too. You managed some amazing productivity in spite of it! Hope the kumihimo workshop went well and that afterwards you were served a nice cold beer whilst sitting in the shade.