Weaving According To Damselfly

I’ve known how to weave for a very long time. I borrowed my first loom (a Cherryville counterbalance) when my son was in preschool. He’s now 40 and even his kids are years past preschool. The reason I remember when I got it is because I borrowed the loom from his teacher, a lovely Dutch lady. Unfortunately she eventually wanted the loom back after less than a year.

So then I borrowed my second loom. This was a Leclerc Minerva jack loom, only 24” wide but a little powerhouse. It’s owner was temporarily moving in order to rebuild her house. I wove a lot on that little beast for the 2 years I had it. I finally bought a second-hand sort-of jack loom, a no-name hand-built job that had flimsy beams and travelled across the floor when I beat very hard at all. It was a piece of junk but I didn’t pay much for it and it taught me quite a lot. Mostly about not buying junk but that was a good lesson anyway.

I borrowed yet another Leclerc counterbalance loom for awhile but then in 1987 finally bought the floor loom of my dreams, my Woolhouse Gertrude countermarche #27. She is large and solid and still my favourite loom to weave on. Her little sister Carolyn, a Woolhouse 12-shaft table loom on a floor stand followed in 1990. I wasn’t giving up on Gertrude but Carolyn, although much smaller, could do some things her big sister couldn’t. Travel to workshops, for instance! I currently also have a 4-shaft Rasmussen table loom but have only used it for teaching purposes. It was given to me by a retiring weaver and it’s pretty good for a table loom. Needs more heddles though. They’re the flat metal type.

I like that my Woolhouse looms were built in BC out of locally milled birch by people I know personally. John & Teruko Low are trying hard to retire but the business is still dragging on for them because they were sadly unable to find another person to take it over. They are promising for several more years still to stock Texolv and reeds and to service existing equipment that they’ve made over the last 30 years. Looms are a large item to house and an expensive investment. No wonder the market is limited! And then there are the skills and know-how to use the darn thing. It’s really only my stubborn will that’s keeping me from cutting off the current project and consigning it to the trash.

None of the problems I’ve had are the loom’s fault. Only my own questionable choice in using my handspun yarns along with the commercially spun hemp/cotton. I’m actually hoping that most of my warp troubles are behind me now. I cooked up some goopy sizing using 1 tsp flax seeds in 1/2c water and painted it onto the handspun jeans/hemp warp threads – and anything else that looked like it might give me trouble. It dried really quickly in the heat and seemed to help quite a lot. I have my resized temple that Thom fixed for me: 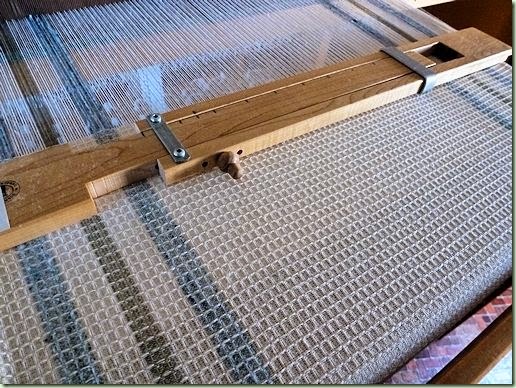 Doncha love the cute turned handle on the joining peg? This second-hand temple didn’t have the piece of wire that usually goes through the parts when I got it so he improvised with a nail and a little bit of wood he turned on his lathe. It really helps to keep a consistent width and to avoid abrading the edge threads so much. Waffle weave naturally draws in just by its structure and plumps into deep little squares after it’s removed from the loom and wet finished. I’m nearly finished towel #1 with all its flaws and mending to be done. (The photo shows probably the only area without dangling threads.) I’ll use it anyway. And hopefully (crossed fingers!) the next three go a little more uneventfully. I might even be relaxed enough to add a few weft-wise stripes. So exciting!

In other news, here’s the socks I’ve been promising for awhile. They’re probably kind of anticlimactic now though. 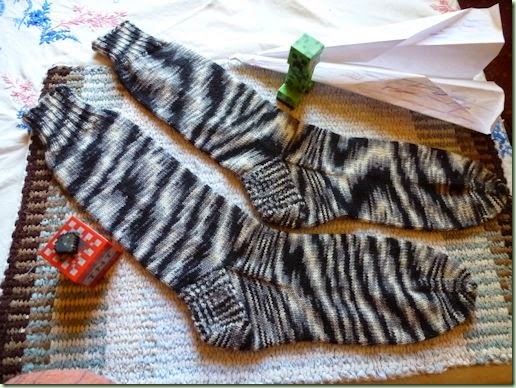 This was my first experience with this indie-dyed yarn. The base is very nice, good twist and there was no colour in the washout. It was fun to knit and watch where the colours were going. The results are quite eye-dazzling! Did you notice grandson Stargazer’s Minecraft toys sneaking up on the socks in the photo?

I’m thinking I must have knitted nearly 200 pairs of socks by now, most of them my Plain Socks. I was recently reminded that I should put the pattern on the block and include a link in the sidebar. So I’ll do that very soon. But not today.

the waffle weave looks lovely, the handspun stripes are perfect - worth all the problems?? I do like the handle on the temple - I have to pull the pin with pliers.

Hi Louisa!! I'm so intrigued by the commentary about the loom(s). It's a world and language I know nothing about and yet I'm so tantalized! I think I want to learn everything...how to silversmith, how to weave and knit, how to stack stone, how to lay tile and create mosaics, etc.!!!

For the moment I'm sewing a bit and blogging a bit. :-) Guess there's a lot to look forward to.

As always, I enjoy hearing what you've been up to! XXOO

I do know how it is - wanting to try so many different crafty things! Though I think now I've actually started to narrow it down just a little. Some stuff is no longer so interesting to me but at least I can say I've done it! There already isn't enough time to do all the things I really want to do as it is so I don't mind jettisoning a few not-nearly-so-exciting ones.