In Case You Were Wondering

Yup, I’m still here! Nope, no further bad things happened with the wasp sting. It now looks like a mosquito bite but after feeling rather uncomfortable most of the week it has finally mostly ceased to itch. Won’t stop me from carrying my epi-pen around everywhere though! You never know. I almost got stung again yesterday out at the Steveston fish wharf. But I’m getting ahead of myself.

It’s been a fairly busy week and I’m missing a few photos that would illustrate things better. Camnesia? Or just plain lazy. I will attempt to do better in future. (Sure.) Of course there’s the ever-present watering of gardens. The weather remains quite lovely though slightly cooler than it has been. Just perfect, in other words! We took advantage of the dry spell to refinish the back deck: 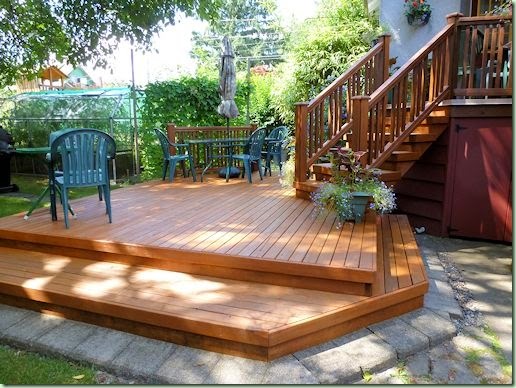 All the railings too, including the ones by the basement door and on the front stairs. Tedious to do, just sayin’. Doesn’t it look nice? Of course that was before the Stoopid Squirrels spit tiny bits of my walnuts all over it! It’s been a bumper crop year and we won’t get any. Again. Nor our hazelnuts either. Have I mentioned how much I HATE squirrels?

Anyway, it’s done for another 3 or 4 years. I love our deck. We spend quite a lot of time out there in summer. I’ve been spinning out there and nearly have a skein of black wool to contrast with the leftovers from my Rainbow Dark cardi to make another sassymetrical. And speaking of knitting projects, I’ve been sorting out my patterns, yarn and needles for our September camping trip. Not even sure exactly where we’re going yet, but I’ve got knitting to do while we get there! Far too much knitting probably but it’s good to have choices. You know. Just in case.

I also finally finished the divoré on the rayon/silk velvet. If you remember that far back, this will be a rather elegant cardigan or jacket adapted from Katherine Tilton’s Butterick 5891. I only burned out the sleeves and the front bands/collar piece and left the body solid velvet. Now I need to dye the pieces before sewing them together. I will use Procion MX in a scrunch-dyed technique but I still can’t quite decide what colours or how intense I want it. Greens perhaps? I think I need to just do it and see what comes out! Good thing this fabric doesn’t fray much because it goes through a LOT of processes before it becomes anything: washing, drying, divoré paste, ironing to activate the burn-out, scrubbing out the loosened pile, washing some more, dyeing, rinsing, simmering in Synthrapol, rinsing some more and then, after all that, sewing the final garment. Whew. I hope the dyeing process will remove the rest of the loose pile fuzz because currently the pieces shed little sparkly rayon dust all over every time I touch it! I still need to thoroughly vacuum all around my ironing board in the studio. It looks like it snowed up there.

Speaking of the studio, here’s the Mountains & Valleys scarf on the loom: 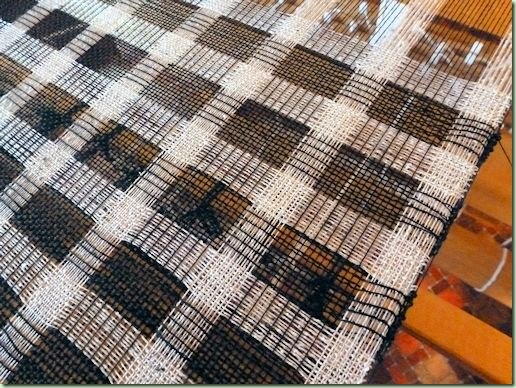 The black wool parts look like window screening! Really hard to beat that lightly especially on my big countermarche loom with overhead beater. I have to just barely touch the weft into place. It shifts around like crazy if you just breathe on it too so I’m going to have to be careful to pack some sticks in the cloth beam to prevent the cords from causing too much slippage. Some is inevitable though I think. Hopefully it will all come right in the wash. It has to be really well fulled to shrink up the wool and leave the silk to bubble. That’s why the rectangles rather than squares because it shrinks more width-wise. Whatever. That’s as good as I can beat with this. Otherwise the warp has been very cooperative this time. Yay. I just have to carry on as I have been right to the end. The wool is continuous but the silk has to be started and cut off for each stripe so it’s not going very quickly at all. No hurry. It’s a good challenge for my weaving control anyway.

So I think I’ve accomplished my goal of kick-starting the weaving mojo! Now I keep finding things I want to weave. I certainly have enough stash to carry on with for quite some time to come. More will have to wait until autumn though. And of course meanwhile I haven’t been sewing! No new summer clothes while it’s still summer. Sigh. Can’t do everything unfortunately, can you?

The garden is winding down. There are bare patches now so I’ll be planting some fall rye seed soon. I made sweet spiced bean pickles out of a couple of large bags of beans. It made 7 and a half jars. I think I still have to work on the recipe some more though. They keep floating in the jars. We may soon be dehydrating some of the bumper crop of mini paste tomatoes too. Nice to have them ripen before September! Next week we’ll be doing another Ai Day with the Japanese indigo. I may not get to the woad this year but that’s ok. Or maybe when I get back in October. The indigo is already starting to flower too. I found it helps to leave some plants untouched and they’re the ones sending up flower shoots. It takes a long time for the seeds to mature however. They’ll need to be picked in late October to finish ripening in the house.

And speaking of dyeing, at our Spectrum meeting on Thursday we had a pot of dye from dried gardenia pods going. I’ve never heard about this dye in any of the books. These were bought from a Chinese herbalist (we have lots of those locally because of our large Asian population) and obtained with great difficulty by one of our members who had to try to explain what she wanted. Not easy even armed with the botanical name and the Chinese name. (I need to find out what these are myself!) Finally she found a shop where the woman figured it out right away and sold them for the very reasonable price of $1 an ounce. These pods give a lovely warm yellow that is substantive (i.e. doesn’t need a mordant). I dyed a couple of balls of my recent Elann sock yarn acquisition and didn’t even bother to skein them but just threw them in. I didn’t really want an even dye but it came out rather more even anyway probably because those cute little puff balls are quite softly wound. I plan to skein them up and dip-dye in the indigo vat next week. Photos to come.

Yesterday Thom & I took his mom out to Steveston, a cute little touristy fishing village that is part of the municipality of Richmond. We had fish & chips and fish tacos at Pajo’s on the dock and then wandered around for a bit before going down to the fish dock. The sockeye run is just starting so we bought a medium-sized one and a couple of pounds of side-stripe prawns. Oh big yum! Thom & I had half the prawns for dinner last night with garlic butter (first of my new batch of garlic!) and half the rest in an omelette for breakfast this morning. Ambrosia. The fish was descaled and cut into 3 chunks, two for the freezer and one to barbeque for dinner tonight. I love living by the sea. Apparently the run this year is going to be a really good one so hopefully we’ll have another chance to indulge. It’s fun to go directly to the fishers for their catch and know they get to keep all the proceeds themselves. Just like the farmers market only wetter! Thom also stopped at a farm stand on the way home and bought some fresh strawberries. The second flush of the everbearing varieties are perfect right now.

Today we need to go find something crafty to give the biggest grandbeastie, Princess Silver Fang, for her 10th birthday. (Can’t believe she’s hit the double-digits already!) Today’s the day but the party is tomorrow which gives us a little more time. There are two big art/craft stores on our walking route so I’m sure something will inspire. She’s so hard to fathom sometimes (serious introvert) but she does love to make things as long as it doesn’t have complex written directions. Illustrations are better. Or just created from imagination. I always like to encourage making stuff.

happy to hear you still carry your epi pen - just in case. deck looks fab, I'm envious. gardenia pods are used as a dye in Japan, they make a lovely green when overdyed with indigo. If you find out how to ask for them at the Chinese herbalist let us know.

Yes, the original gardenia inspiration came from Bryan Whitehead when he was here at Maiwa Symposium last fall. I'll be sure to post more info as soon as I get it.