It was so lovely to wake up to the sound of rain yesterday morning. (Yes, remind me it’s so lovely when we’ve had about 4 straight months of it come winter, will you?) I would have had to do a major watering job if it hadn’t. Things are so dry around here! It also seems rather dark but I don’t really mind it for a change.

The rain didn’t dampen our spirits but rather invigorated Thom & I into walking downtown to go see the movie “Guardians of the Galaxy”. Yes, we totally loved it! I thought it was a Star Wars for the 21st Century, it was that good. Great characters, a plausible story line and excellent and very believable 3D special effects, based on a rather obscure Marvel comic series. As you might know if you’ve read this blog for any length of time, I love sci-fi and fantasy. Our son owns a comic book shop. (I’m sure he was influenced by us in his childhood!) Our daughter plays in the Society for Creative Anachronism. They all game too, whether board or online. We don’t – but we get it. Most of my friends and family would rather read biographies or regular fiction or mysteries and look at me funny if I chime in with my fave reads. I don’t care. I love it when someone creates a movie that captures the feel of a good sci-fi romp. Doesn’t happen often really. Can’t wait for the next one. Of course there’ll be a sequel. They even tell you that in the movie credits! And next up I’m waiting for the last instalment of The Hobbit. Not until Christmas again though. Sigh. Seriously though, if it wasn’t for the giant 3D screen and surround sound I would love to be able to avoid movie theatres entirely. The girl next to me had stinky perfume on and the man next to Thom smelled like stale tobacco. Ugh. At least the popcorn was fresh.

OK, enough of that. Back to the crafty stuff. On Tuesday two of my buddies and I had an Ai Day and played with most of the last of my Japanese indigo. It was pretty successful though I left quite a few of the plants alone that have already started to flower for me. We got a pretty reasonable blue even though some of the leaves were pretty tough and old and some were quite young and small. I only had one item to dye so I dipped my lovely yellow sock yarn that had previously been dyed in gardenia pods. Before the dipping: 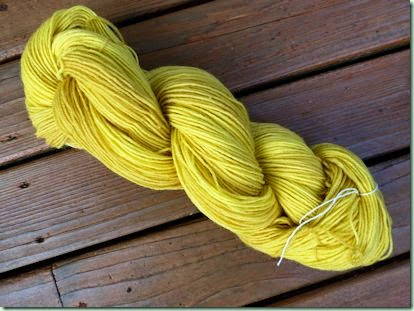 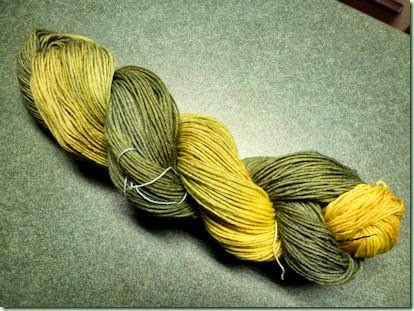 But I’m thinking it needs yet another dip in something else. Perhaps the walnuts that we keep chucking into the city green bin (aka compost pick-up) after the squirrels chop them off the tree before they’re ripe and don’t always eat them. I’ll need to collect a few and soak them for awhile. This yarn hasn’t been mordanted so unless I want to do that first, I need a substantive dye like walnut. I just want to darken one section of my skein to make it a bit more interesting! I don’t want to ruin it though.

BTW, I found out the gardenia dye is Gardenia jasminoides, aka common gardenia or cape jasmine and it’s in the Rubiaceae family. They are subtropical and need heat, bright but not direct sunlight and acid soil to survive so they won’t grow here except as a fussy house plant. The portion with the dye is the dried fruit or seed pod and it’s traditionally used as a dyestuff, a food dye and a medicinal. The latter use is why it was available from the Chinese herbalist. 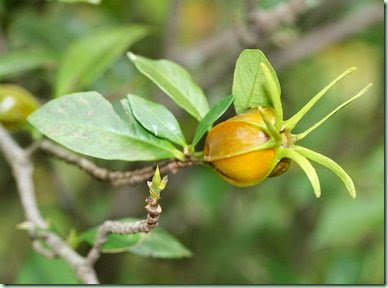 You can see the yellow of the fresh pod in the photo I found. Dried ones look brown. It seems to dye protein fibres best and brightest as a substantive dye. It will colour cellulose fibres with an alum mordant but it doesn’t give nearly as bright a yellow as we found out. The cotton ties in my wool skeins didn’t take any yellow at all! And the bamboo yarn was very pale but the wool and silk took the dye quite well. But then superwash wool and nylon yarn dyes very well in almost any dyestuff. The shade as you can see in the top photo is a lovely warm yellow.

At least I thought it was merino but it might actually be Shetland now that I think of it since it wasn’t labelled. (Of course I’m going to remember, right? Right??) It’s quite nice anyway. I made quite a lot more than I really need for the sweater that I want to make but I can always knit another Bandana Cowl if there’s enough left. I have about 220 yards or so and I only need enough for the neck edge. More on this when I get to working on it.

On another subject entirely, it’s just under 3 weeks now until we go on our annual month’s vacation. I have yet to actually figure out our route but so far I do know we’re heading south this time. Hopefully we can combine desert and rocks with seashore on the way back. That’s my job today – working my Google-fu on the big computer to plan and gather information. I’m so looking forward to getting away for awhile. I love home (so much that it’s sometimes hard to get me out of it!) but I also love getting a different perspective occasionally. Anyway I’ve packed my knitting already! Too many projects for the time available but that’s just fine. Always nice to have alternatives just in case something doesn’t work as planned. I hope we can find wifi while we’re gone so I can post while we’re gone. It’s not easy or always possible but I like to think it’s becoming more and more common everywhere. I’ll be truly happy when I can get online with a fast clean and preferably free connection anywhere anytime. I know I’m not the only one with this wish.

The weather promises to be a little cooler and damper for the next while so maybe I can even get some sewing done. I have a couple of things I’d like to take with me. We’ll see. I keep thinking I need to do a bunch of garden and house tidying before I go away but so much of it just needs doing again when we get back that it’s hard to get motivated. I usually tend to go into a bit of a frenzy before we leave and I’d rather skip that if I can help it. Thom calls it my “packing mode”. I’ll try to get around to everything that really matters but I’m not going to bust a gasket! Last year was rather more seriously major because of the length of time we’d be away so we worked like crazy for the last few weeks of July. At least this year we’re only going for one month, not two. So this time I’m trying to be somewhat proactive without going nuts. Wish me luck.

Yes, the rain has been wonderful! And good luck in trip-planning! Not that it's really needed, you guys are pros by now.