As I mentioned in the last post, Day 9 began with a long drive to Capitol Reef National Park in central Utah. Here’s the Capitol Dome that gives it part of its name: 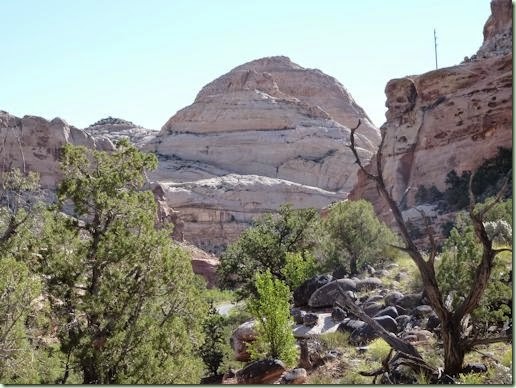 We were lucky and got a campsite near the orchards in Fruita, formerly homesteaders’ lands before the park was set aside. There are still lots of fruit and some nut trees here. Currently the pears and apples are ripe: 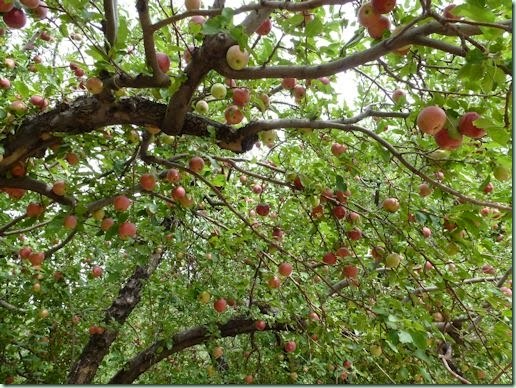 You can pick a few for personal consumption or pay a small fee and pick lots. They have ladders and picking poles for your use when each individual orchard is open. There’s nothing like it in any other public park! We managed to snag half a dozen to squirrel away for later, plus one each to eat right away.

On Day 10 we were still in Fruita. We got up early enough to go for a hike up our favourite Cohab Canyon trail: 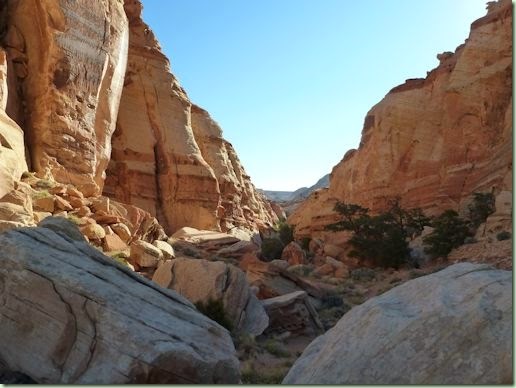 First you zigzag up and up above the campground and then you find this magical little slot canyon. Yes, there is a trail there somewhere! The Flat Rats found themselves a wee sandstone cave just their size: 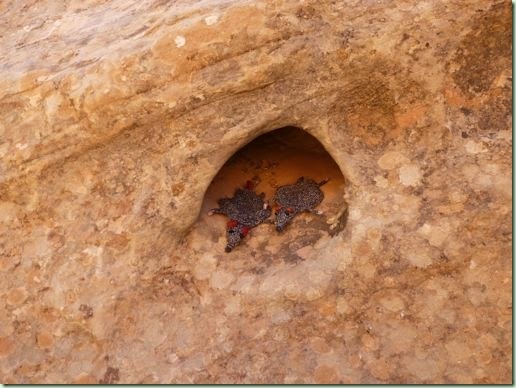 There were lots and lots to choose from! 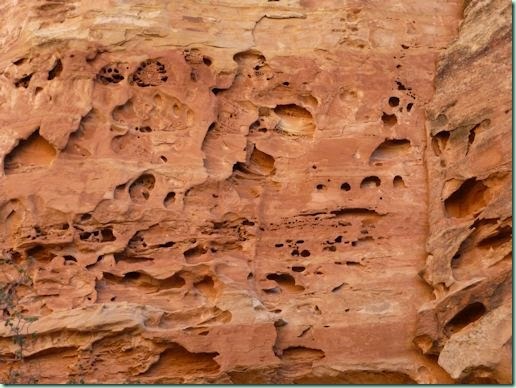 At the other end of the trail you switchback down again to meet the highway. We walked back along the road so we could visit the petroglyphs: 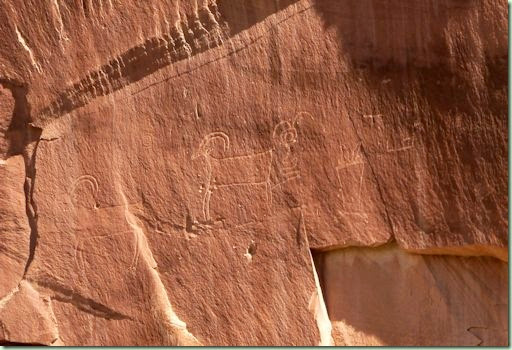 I love these bighorn sheep! There were lots more shapes but the light wasn’t particularly good for photographing them. I also found some of the opuntia cactuses that not only had red fruits but cochineal insects: 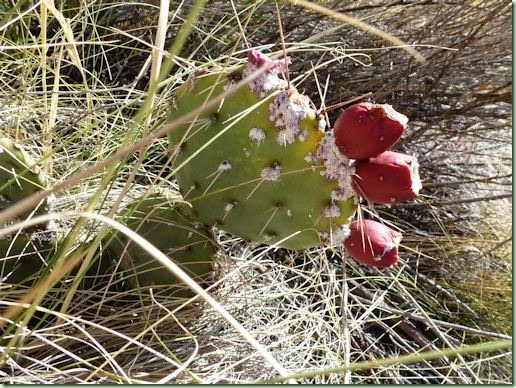 I was good however and left them (and their red dye) where they belong! The late afternoons evenings in Capitol Reef were electrical – thunder rolls around and around the mountains with flashes of lightning and occasional showers. We wisely tried to keep our hiking early enough to avoid both that and the hottest part of the day. Didn’t help though when we were trying to get to sleep early and cracks of thunder kept waking us up.

Day 11 we drove up the scenic road and hiked into Capitol Gorge. 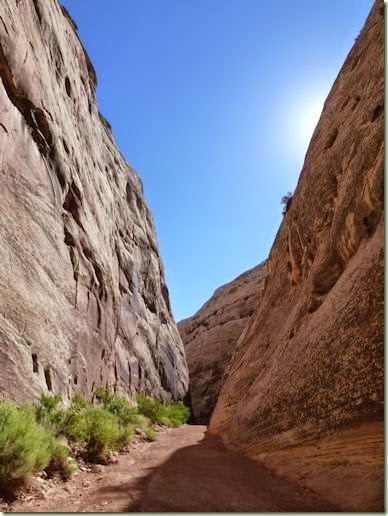 We saw a little bat (in daylight!) and several lizards on the rocks and tiny toads in the damp mud of the wash. There’s also more petroglyphs and signatures of some of the pioneers back to the 1800’s. (No, you aren’t allowed to add yours!) We had lunch at the Grand Wash but we didn’t go too far down it because we were quite tired by then and it was getting hotter. Also we were running out of ice and it was a 20-mile round trip to get some in the little town of Torrey. Obviously the heat has been pretty intense because a block of ice doesn’t even last much more than 2 days. And we can’t always get blocks. Party ice melts even quicker! Don’t want what food we have to spoil, do we? 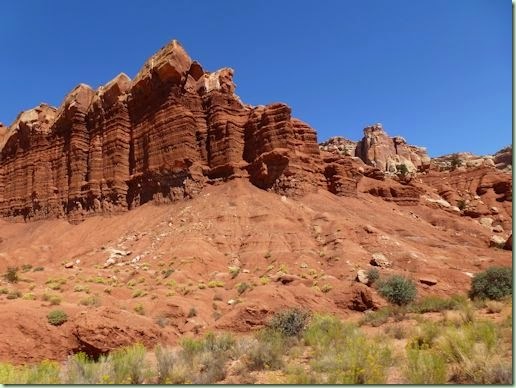 I had fun trying to photograph the amazing rock formations while we were driving by them. None of the pictures does this place justice at all. I’ve tried to give you a little hint which is the best I can do. It’s one of my favourite places.

And I haven’t even mentioned my knitting yet. I finished a rather randomly stripey version of the Sassymetrical Cardi in handspun using the leftovers from my Rainbow Dark sweater and the skein of black Shetland that I spun before we left home. I used nearly all of both yarns for a short puffy-sleeved version. It’s not been blocked yet. First I didn’t have water (Antelope Island) and then I didn’t have drying time (Capitol Reef). But it’ll get done eventually. I also started and half-finished a Lala’s Simple Shawl in several leftover sock yarns. This is my mindless knitting for the road. My fussier knitting for when I have quiet time in camp is the Echo Flower Shawl that I started last year and haven’t touched until now. I’m on the final edging chart so it should be done in a couple more days. It won’t get blocked until I get home though. I didn’t bring wires or enough pins! It will wait.

So next it was off to Arches National Park on Day 12 for a couple of days. We couldn’t get adequate wifi in Moab and I never got a post written (bad blogger!) so you’ll have to wait a little longer for Arches Days 12 & 13. Currently we’re in our 5th state this holiday, Colorado, and a new state for us. There’s wifi here in Mesa Verde’s Morefield campground! Yay! More soon.