So I guess I’ve missed telling you all about Arches National Park, Utah. It’s a busy place! Lots of tourists from all over the world. I heard French, Chinese, Spanish and German as well as English in several accents. We couldn’t get into the campground in the park as usual so we went to our favourite fallback campground just outside the park boundary along the Colorado River, Goose Island. It’s run by the BLM (Bureau of Land Management) and devoid of fancy amenities but it does have clean pit toilets with an adequate supply of tp. That does become rather important when you’re camping, believe me! No water supply though but we were prepared.

Arches has 40 miles of (twisty & scenic) road to get to some of the important arches. We went first to the end of the line at Devil’s Garden and went for a hike. This one is the widest arch, Landscape: 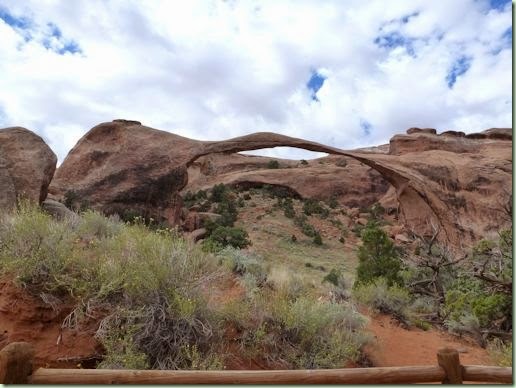 I’d not forgotten how hard the trail gets after this but it was worse than I remembered. Or else I’m several years older! There’s a long uphill on a narrow ledge of slickrock with sloping sides: 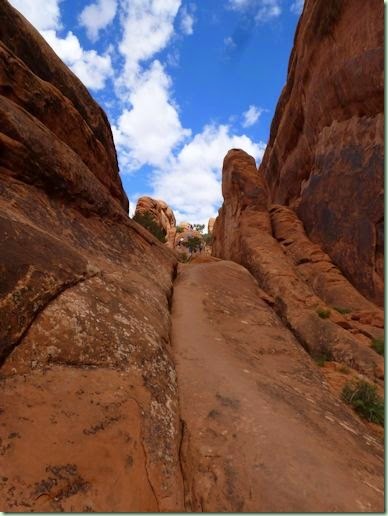 You can see the people ahead of us on the worst bit with drop-offs on both sides. I literally crawled up on all fours! And later of course I had to get back down again. Ugh. This may be the last time I ever do that trail. I’m not good with heights at the best of times and my balance is somewhat compromised with otoconia (ear rocks). There was another bad spot later on and I decided not to go past the really narrow and very high part. It was frustrating watching others waltz past me with sure feet and a baby in a backpack! And a 30 foot drop on both sides. Nevermind.

We were able to see quite a lot anyway. This one is the massive Double Arch: 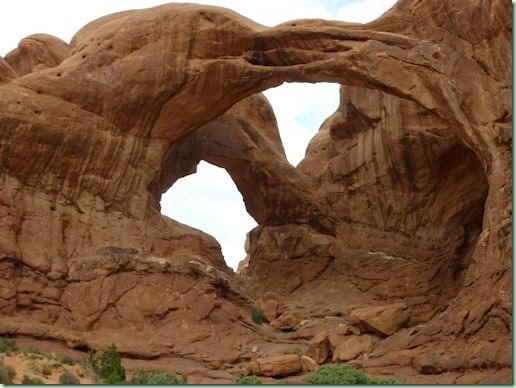 It was hard to photograph things without too many random people in the frame. And there’s just so much to see! We also walked the Park Avenue both ways. The trail is not hard and mostly in a wash surrounded by walls with different shapes. Just outside one end is my favourite rock formation in the park called the Three Gossips: 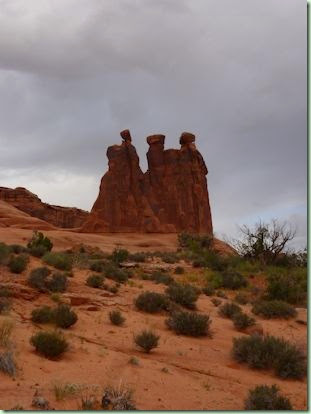 They look quite different depending on which angle you view them from. There are quite a few rocks that look like people or animals (a Sheep Rock and Parade of Elephants). All you need is a good imagination. The second day at Arches was overcast (thankfully!) and sprinkles of rain kept us cooler than we might have been. But that night there was yet another thunder and lightning storm including lots of rain which continued on and off into the next day. It was hard to sleep with all the windows shut in the still-considerable heat.

Day 14 was quite rainy so we weren’t especially sad to leave Arches and head for Colorado and Mesa Verde National Park. Since the rain decided to follow us we could only view the scenery through the mist and clouds. Mesa Verde is quite different from Arches and the rocks are yellow and covered in Gambel oak, pine and juniper. Here’s a park viewpoint as the rain was coming in again: 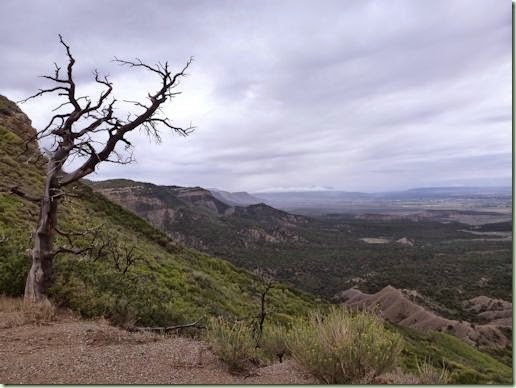 You can see how very high up this is! Nearly 9,000 feet above sea level. And it’s a lot cooler here – at least at the moment. The road snakes back and forth following the rim and even goes through a tunnel. This afternoon we spent getting settled in the huge campground (with wifi from the campsite– yay!) and getting much-needed showers and doing laundry. Tomorrow we’ll go on a couple of the tours of the Anasazi Ruins which are quite a long way away on the switchback road.