Here it is Day 17 and we’re still in Mesa Verde National Park, Colorado. There’s just so much to see! We’ve nearly emptied the gas tank because all the good stuff is quite a long way away, a 36-mile round-trip back to camp. On Day 15 we went on both of the available ranger-led tours of the cliff dwellings, Cliff Palace and Balcony House.  They were very interesting and we spent quite a lot of time listening to history and culture lessons. It wasn’t at all boring since we were standing where the Ancestral Puebloan people stood 800 and more years ago. It was also quite strenuous! Here’s our first view of Cliff Palace: It’s rather beautiful – even if I would never have wanted to live there. We had to climb around down a steep trail with stairs to get down to it. I’m sure it was a lot easier for us than for the original inhabitants who only had ropes, ladders and finger and toe-holds in the rocks to move around! Here’s a detail from down below: The stonework was really impressive since they only had stone tools to work with. Balcony House was even harder to get to. We had to climb ladders: 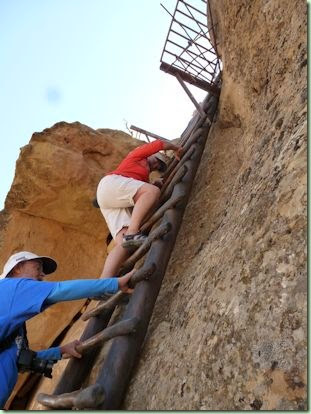 …including a 30-foot one and we had to shimmy through some tight places: 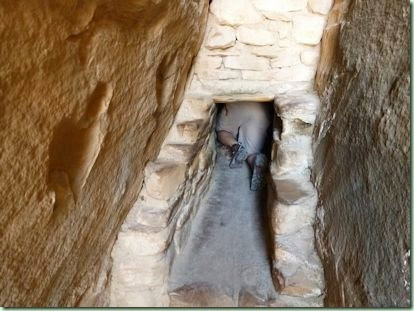 Everyone made it just fine! Fun at 7,000 feet above sea level.

Day 16 we went to another cliff house, Spruce Tree House: 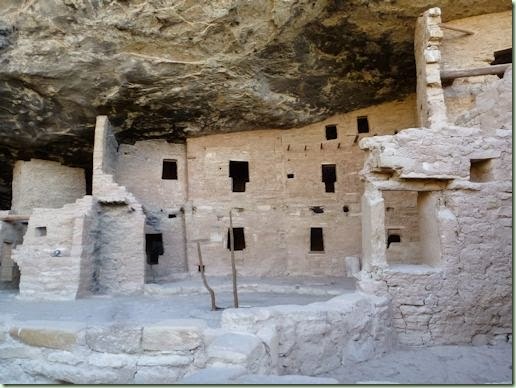 The T-shaped doors have inspired lots of speculation on their meaning and purpose. Many of the cliff dwellings have them. We also learned a lot about the kivas (round underground rooms) which were plentiful everywhere. 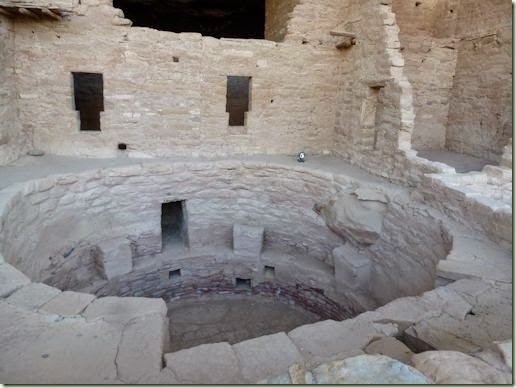 The contemporary thought has it that they were clan gathering places, whether for work or other reasons, perhaps ceremonial. We climbed down into the only one with a restored roof: Gotta say, if people were trying to do fine handwork down there, there sure wasn’t much light for it! We also explored the museum which was very informative, if slightly old-fashioned. Plus we almost lost the Flat Rats! We got back to the van and the little beasts were missing from my bag! I totally thought that was it for them because I sure wasn’t going to re-trace every single step that day. Fortunately Thom saw a lost-and-found sign and went to inquire if anyone had turned the critters in. Nope. (Do you know how hard it is to explain Flat Rats to the Muggles?) Then on a whim he went back into the museum and there they were – stuck down between a stair and a ramp. He only just managed to notice them because he went through the place backwards to the general direction of the displays. Grrr…I put the Flat Rats in time-out for awhile until I got over their AWOL affair. I swear I was ready to leave them in Mesa Verde with the lizards and the ground squirrels.

Today, Day 17, we hiked the Petroglyph Point Trail. You know how much I love petroglyphs! The trail began with the Spruce Tree House trail near the museum but split off and became rocky quite quickly. We signed in at the registry box (so they can track who’s out there) and carried on. A most interesting trail! 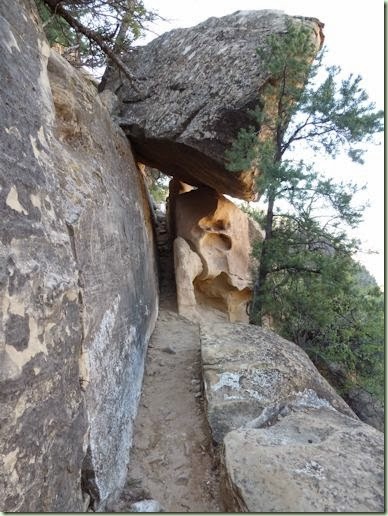 Here’s one bit where you had to squeeze between the rock walls. This was just wide enough for me if I went sideways, otherwise my hips were in the way! There were plenty of steps cut into the rocks and it followed along the cliffside for several kilometres. We finally came to the petroglyphs. I particularly liked these two birds, beak-to-beak: 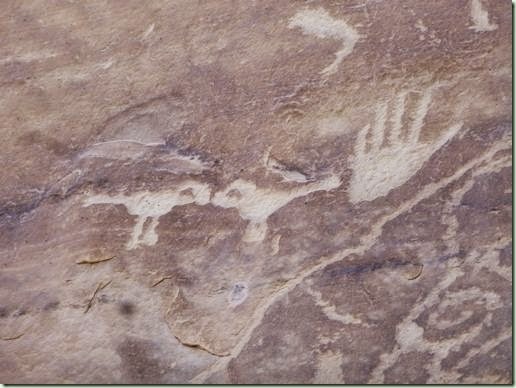 The Flat Rats were wondering where the pictures of their ancestors were: 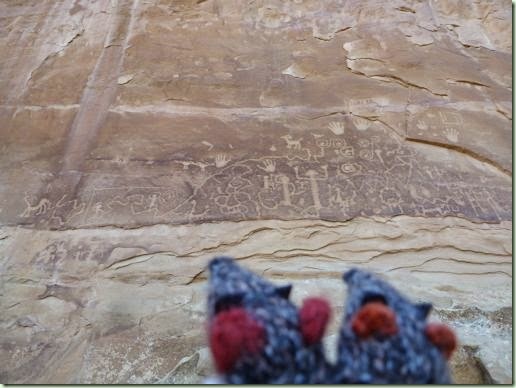 We looked but we didn’t see anything particularly rat-shaped here. Further study is necessary, I think. After this we were happy to find that the trail went up onto the mesa and was fairly flat and easy on the way back. We weren’t really up for a return along the cliff face at that point. On the way back we saw a flock of turkeys. These guys are big! We were wondering if they were actually the descendants of the ones the Puebloans had tamed for eggs and feathers. These were their only domesticated animals except for dogs. 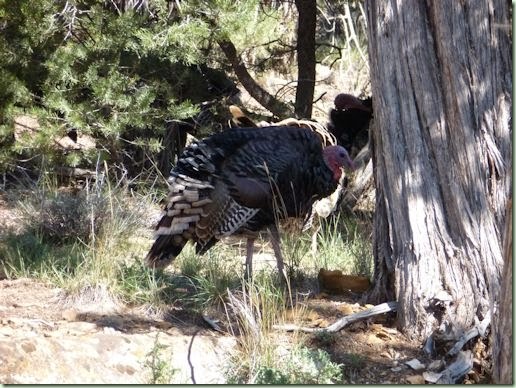 After we got back we continued back toward camp and stopped at the Far View village sites. These were unlike the cliff houses because they were safely on flat land: 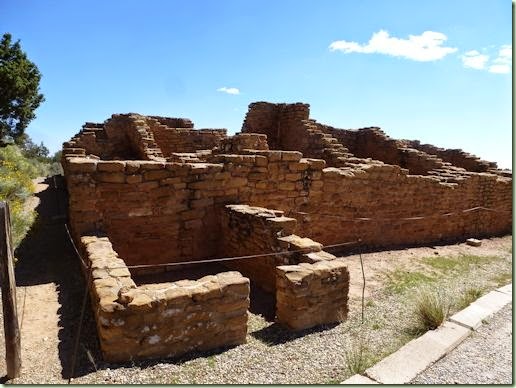 A bit less alien really. So much to see and learn. And to understand that nobody knows very much about how things really happened here. Especially why this whole place was abandoned around AD 1300.

Anyway, we plan to abandon it ourselves tomorrow morning. We have a bunch of errands to run in Cortez, the nearest town, before we head off to Arizona. We decided to skip Chaco Canyon, New Mexico, because of the bad roads in to it. Our muffler has a loose connection and we’re concerned about losing it while driving over washboard surfaces. Instead we’re heading for Antelope Canyon and Lake Powell for one night and then on to Grand Canyon’s South Rim where we have reservations at the campground for two nights. At that point we’ll be a day ahead of my original plans. We’ve been spoiled the last few days for Mesa Verde’s cool nights but warm sunny days – not really hot at all. I think it’s going to be back into the frying pan very soon!

Speaking of warm sun, I took advantage of it and a water supply to wash and block my Handspun Sassymetrical Sweater: 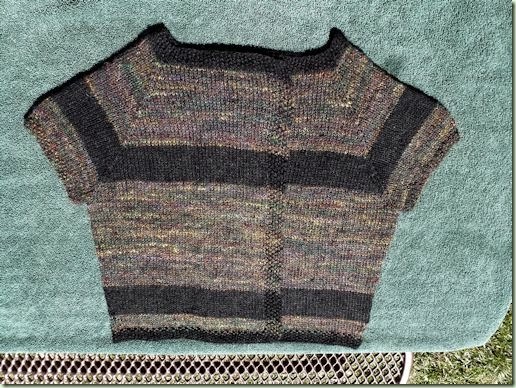 It’s quite a bit darker than it looks in this picnic table shot in the bright sunshine. Also probably looks much better on a body but I’ll have to wait until it’s dry and it’s cool enough that I don’t melt into a puddle of goo if I put it on.

I also finally, FINALLY, finished the Autumn Echo Flower Scarf that I started way back last October. It looks very wrinkled and teensy right now and I can’t block it until we get home since I didn’t bring the blocking wires with me. 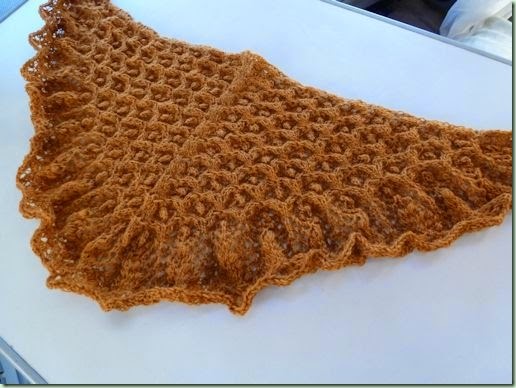 Great texture there though, huh? More on this scarfy thing later.

I also had to frog a section of my Travelling Shawl because I didn’t like the plain dark navy next to the rest of the yarn. It didn’t play as nice as I wanted so I hauled it back and added some navy/purple sock yarn in between. I may make it a little longer as well so I hope I don’t run out of yarn in a bad place. There isn’t any more! I’ll be working on it tomorrow as we travel. Travelling Shawl. Get it? <snort!> I crack myself up.

So, more soon. However I have no idea when we’ll get wifi access again. Especially as nice as this one is! We deliberately camped in this spot because it was near the washroom which has the wifi network. Yeah, wifi from the loo again. It’s a trend, I tell ya. I don’t care as long as it works! Anyhow, another day, another state.