Are you still in My Wayback Machine?

Day 26 was a rather long one. We left the barely adequate private campground and headed west on a wonderfully twisty up-and-down Highway 120, past the sadly singed ponderosa pine forests, down onto the flat agricultural valley area just north of Modesto, and heading toward San Francisco Bay. The orchards were intensely planted right up to the 2-lane highway and we couldn’t identify the crops as we zipped by. I know they grow lots of almonds plus peaches, apricots, avocadoes, strawberries and a bunch of other things there. I always wish the farmers would have signs for us gringos! Enquiring minds want to know.

Eventually we left the orchards behind and slid into the spaghetti of multi-lane freeways that snake into the Bay Area. It was all I could do to keep us on the right track towards San Rafael, which is in Marin County north of San Francisco. We had to go over a double-decker toll bridge ($5!) and I accidentally took us off the freeway an exit or two early on the other side. But after a moment of panic we found where we were going ok. There was plenty of time since to get lost in since it turned out that Dharma Trading opens at noon on Sunday and we were 2 hours early. So we found a little cafe for lunch and some wifi. Oh no! Bluet wouldn’t work! The connection was good but something was wrong according to my netbook. No posting happened (sniff!) but I managed to read my email with my iTouch instead. At least it wasn’t a TOTAL bust. The lamb shawarma I had was good too even if it didn’t quite taste like the ones back home. Different spices or something.

I finally got into Dharma and (ahem) went only just a little nuts! I bought 3 packs of a dozen handkerchiefs each because we can never have too many of them. We both love those big cotton hankies! I also got 4 yards of a nice medium weight of linen/cotton fabric. Plus 2 yards of some dreamy silk/wool twill that practically floats away on gossamer wings. And although I insisted that I didn’t need any dye I still bought some Procion MX fibre reactive dyes in Better Black and a neutral taupe-brown called Havana Brown. Not available at home. That’s my excuse and I’m stickin’ to it! I have lots of yardage to be dyed anyhow. It’ll be fun.

Lastly I got 2 sets of Knitter’s Pride 2mm dpns to try out for my ever-present sock knitting. They’re square! And coated brass! And short and not too pointy or blunt. I tested them on a small sample and they’re a little odd-feeling but quite nice, I think. I’m always looking for sock needles because although I love Clover Takumi Velvets the best, they wear out too quickly or I break them. My super-expensive Blackthorn carbon fibre ones which are supposed to be so tough are even wearing down too blunt for my taste. (Have to find out the best way to sharpen them up.) Mostly I don’t particularly like metal ones but these feel not too slippery. Maybe because they’re square. In the end I think I forgot a few things that I was going to look at that were on my Dharma list. But nevermind. Dharma does mail-order.

OK, the truth here. It’s actually a miracle I bought anything at all because I had a swooning fan-girl moment when I recognised Ricё, of the Voodoo Cafe whose blog and podcasts I’ve been reading and listening to for years, in the shop. Also her charming husband, the Ever-Gorgeous-Earl, and both of them wearing their fun brightly-coloured clothes. Ricё was very gracious when I introduced myself and Earl took our photo (which I hope I can get a copy). They were there for an art retreat nearby and of course Ricё was checking out the delicious collection of goodies that Dharma has to offer. She has written about ordering things from them on her blog since she does a lot of dyeing in her altered clothing work. Hopefully more on this later when I get home and get a chance to contact her.

So after Dharma, we continued west out of San Rafael on the delightfully-named Sir Francis Drake Boulevard to Samuel P. Taylor State Park, deep in the redwood forest. Although the sign said they were full, they weren’t and we got a campsite and decided to stay for 2 nights. It was sweet to relax in the cool shade which was a lovely respite after all the desert stuff. We were nearly to the coast! But not damp enough yet, you’ll see.

On Day 27 my scalded leg was feeling better enough to leave off the bandages and ride our bikes along the Cross-Marin Trail, a lovely paved multi-use trail that goes for many miles. We rode nearly to Olema and Highway 1 but turned around at this funky old concrete bridge over the Lagunitas (Papermill) Creek: 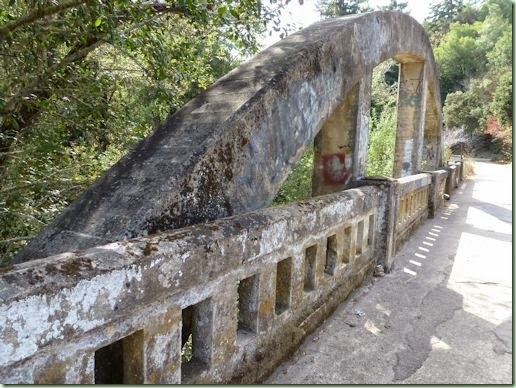 It felt good to get some real exercise after sitting around for several days feeling sorry for myself. We saw quite a few trees that we couldn’t identify, including one that we’re pretty sure is a eucalyptus tree of some sort (imported from Australia originally, one presumes) and this one with almost no leaves left and hard pear-shaped fruits. What is it? I think it’s a California buckeye, if my current info is correct. 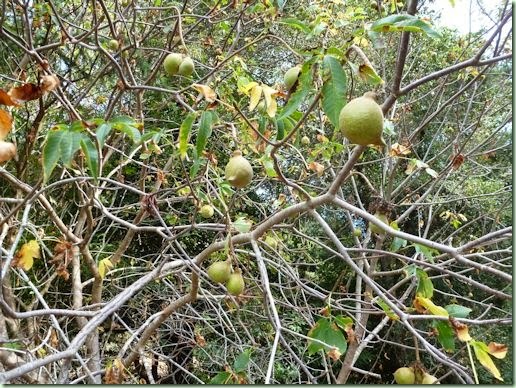 Nature sure is a fascinating place, isn’t it?

On Day 28 we were quite rested and popped up early to head directly to the Pacific coast and north on Highway 1, the old coast road, which is full of curves and switchbacks which Thom loves to drive on. We have to make sure everything in the van is stowed well! Although there was some construction too, which he doesn’t love so much. We got stopped several times on the way by construction flaggers, once extra-long while waiting for an older couple on a tandem bicycle to make it up a long and steep switchback. We felt for them. Ugh. (There’s a reason why there’s a battery and an accelerator on my bike. Just sayin’.) Once we arrived at MacKerricher State Park, just north of Fort Bragg, California, we picked a nice campsite with a view of the sea: 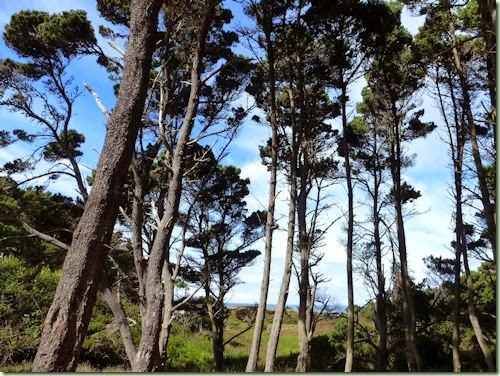 Yes, it’s there. Well, we could see it better in real life!

After lunch and a rest we went for a walk down on the shore and for a mile or so south along the Haul Road, the level trail that historically used to have a small engine that hauled wood to the lumber mill. Now it’s a popular cycling, horse-riding and walking trail. We went down to the beach to tide-pool. It’s lovely being back by the sea! 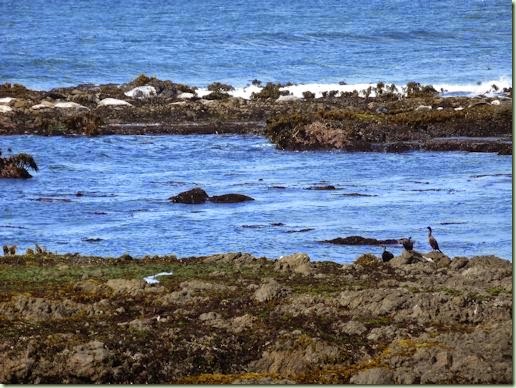 Can you see all the harbour seals on the rocks in the background? They look like light-coloured lumps! In the foreground there’s cormorants and I just missed catching the oyster catchers with their bright red bills in the shot.

We were doing really well with the weather but on Day 29 we woke up to a sprinkling rain that got worse as the day progressed. After packing up we continued north on Highway 1 but we couldn’t see much more than big misty waves crashing on the shore and foggy mountains. Highway 1 eventually turns east into the forest and takes you up and down and around until it meets the larger highway 101. By this time it was raining in earnest and we proceeded north toward Oregon, bypassing all the other nice northern California state parks. The scenery was somewhat obscured and drippy. We did see 2 quite large herds of elk on the way though so it wasn’t a total loss. No photos though. Thom wasn’t stopping anywhere! It was a rather long drive, what can I say?

Oregon was our 2nd state already this trip so it doesn’t count as a new one but Brookings is at the opposite end from Portland. The rain stopped when we passed the state line too though the locals were all very happy to have some moisture after a very dry summer. I guess we can’t complain much either since our weather has mostly been pretty great all month. We went shopping at Fred Meyer for some groceries and a new French press (used only for tea) since our old one cracked. (Must have been those wild rollercoaster roads, huh?) Can’t go on without good tea, doncha know! Camping this time is at Harris Beach State Park. The beach here is so picturesque! The waves were still big and the mist still obscuring and mysterious: 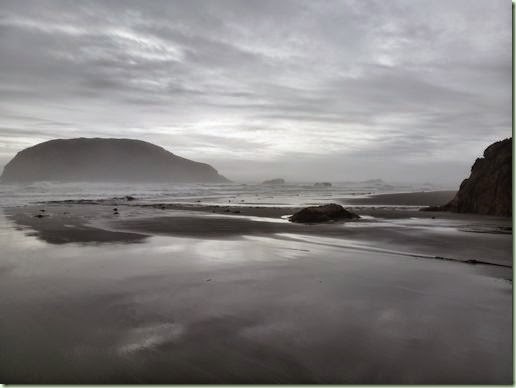 Harris Beach not only has a pretty face but it has nice free showers in a clean and warm building. I love Oregon SP campgrounds! My ouchie leg didn’t even hurt in the hot water. Small miracles. Milagros. Whatever. I’m really clean for the first time in ages. Yay, hot water and soap. Also an electric plug-in, where we recharged the bicycle batteries for the first time this month. We can charge the computers and iTouch/iPhone with the inverter through the cigarette lighter but the BionX batteries take a lot more power. So do not underestimate the electric plug, my dears. Try to live without it for awhile, I dare ya! Ever since I found myself hanging out in a campground washroom a couple of years ago trying to recharge my computer, I’ve added that item to my list of needs: electricity, gas/propane, hot/cold water, heat/ice, hot tea, food, washrooms, clean underwear, clear maps, knitting, and the most elusive beast of all, GOOD wifi. Life reduced nearly to the basics! Beyond which I will not go. You can’t make me. Oh all right. I can live – sort-of – without wifi. But I’m not a happy damselfly about it.

We have 4 more days in Oregon so we’ll work our way up the coast to a selection of our favourite places, one day at a time.