No, Not Back On Vacation

I KNOW! A whole week without a word. I’m having re-entry problems I think. So much catching up to do and no idea what needs doing first. So I dither around and don’t really get anything much done. Sheesh. I think my brain is still on vacation!

So lets just dive in, shall we? I have a whole whack of projects that haven’t been blogged. Starting with the most recent where I dug a really elderly ball of sock yarn out of the Sock Yarn Tower and dove in to a new pair. Hate not having socks on the needles at all times! The yarn is Lang Yarns Super Soxx Cotton in an interesting mix of 49% wool/35% cotton/16% nylon and the shop I bought it from no longer exists – which might be a hint how long I’ve had it in the stash! Don’t remember doing it but I had sometime in the past already wound it into two balls, found the matching beginning spot on both balls and yet never started anything. It has fairly wide stripes of dusky purple, sand, dark gray, orange-yellow and pinky-red and I wanted to break those up a little so hunted in the book “Knitting Socks with Handpainted Yarn” by Carol Sulcoski for some ideas. The pattern Staccato Socks by Veronik Avery had a Wave Pattern that was only 2 rows long by 16 sts repeat so fit perfectly into my usual Damselfly’s Basic Sock Pattern. Easy to memorise and knit while watching TV. It nicely bends the stripes into a more interesting shape which immediately reminded me of Antelope Canyon in north-eastern Arizona. Here’s one sock so far: 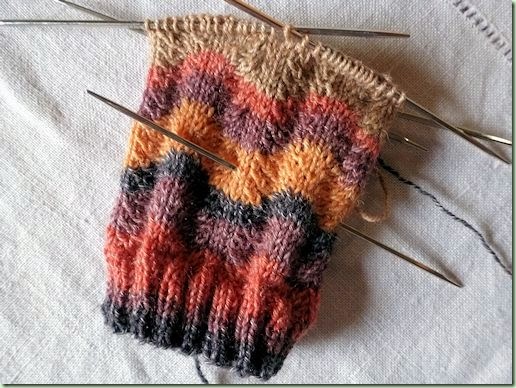 And here’s one shot of the canyon looking up: 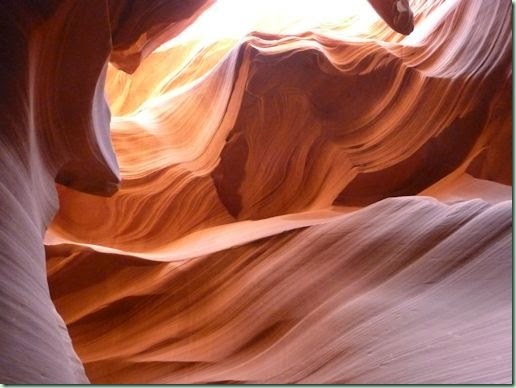 See what I mean? Amazingly serendipitous, no? I couldn’t have dyed a better match myself. Now I’ll remember Antelope Canyon every time I wear them. But then who could ever forget such an awesome place?

The knitting photo also shows my new favourite sock needles that I bought at Dharma Trading in San Rafael, CA, when we were there. They only seemed to have a few sets left but luckily still had 2 sets of 5 of the 5” size 2mm (US 0). These are Knitter’s Pride Nova Cubics, which are made in India from square brass tubing and then nickel-plated. The link shows the newer Platina version with slightly sharper points and chrome plating which is more durable instead of nickel. I think mine are the older ones but the points, while not as sharp as I prefer, are adequate and the price was definitely right. They were quite a bit cheaper even than the Clover Bamboo dpns and I’m sure they will last a lot longer. It took a wee bit of getting used to the square shape but they now feel normal to my hands. Not too slippery and easy to hold and manipulate. You can put them down and they have no tendency to roll away! Until I can find out how to sharpen my carbon fibre Blackthorns up again, these are now my go-to sock needles. Love.

What’s next? I finally got my Ravelry project pages just about up-to-date now. I included the entire pattern for Thom’s new replacement Glasses Sock. He uses it in his breast pocket (or wherever) to protect his reading glasses from scratches. Here it is if you need one of these for yourself or a gift for someone who puts their reading glasses down all the time. You could even make a strap or thread it on a chain to wear it around your neck. Thom doesn’t like it that way though. 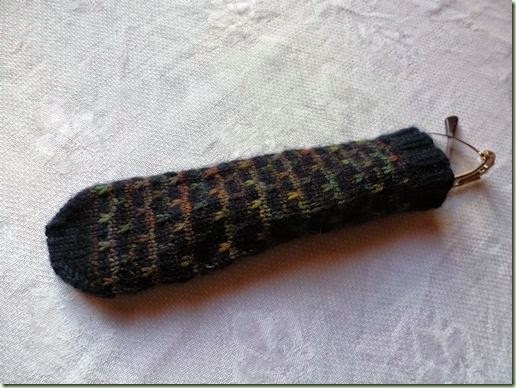 Uses 2 small balls of leftover contrasting sock yarns and a set of 5 - 2mm (or 2.25mm if you're a tight knitter) dpns. Fits the common drug store reading glasses.

With Main Yarn , CO 32, join in round and arrange stitches evenly on 4 needles.
K2, P2 ribbing for 3/4”. Switch to slip-stitch pattern beginning with Contrast Yarn.

I kind of made the slip-stitch pattern up on the fly but you could just knit plain stockinette like the first glasses sock I made. I must have made it over 7 years ago because it’s not in my Ravelry projects. It disintegrated so Thom chucked it after he got his new one.

So while we’re going backwards in my knitting projects, there’s one scarf I finally finished on our holiday: 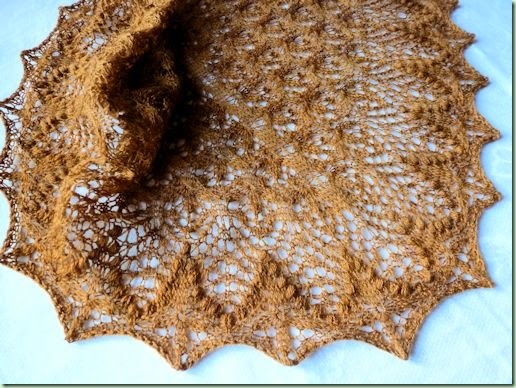 I started the Autumn Echo Flower Shawlette (actually a scarf) a whole year ago and somehow wandered away from it before it was done. I rarely do that and it’s not like it was a boring knit or anything. It did take concentration though so not a TV or travelling project but one to work on while sitting quietly. The yarn is Baruffa Cashwool 100% merino cobweb weight that I dyed in cutch and I only used 23g (approx. 336 yds) so there’s nearly half of my 40g ball left over. I used 3mm Addi Lace circulars and the free Echo Flower pattern by Jenny Johnson Johnen which uses some of my favourite Estonian stitches. I’m calling it a scarf because it blocked out quite tiny, just going around my neck like a kerchief, but I like it. It’s a good size when I just need a bit of a neck warmer. The cutch dye’s warm golden brown goes with lots of things in my wardrobe.

Now, let’s save the rest of the projects for later, shall we? I’ve done a little cleanup in the garden and got the garlic planted. Last year’s kale is still going strong so we’ll see if it can make it through another winter with this year’s as backup. Picking the new shoots keeps it branching instead of just picking off the bottom leaves like they tell you to do. I like the young leaves better anyway! Picked the last of the winter squash, green tomatoes and cabbages too. The tomatoes will mostly ripen on the counter. The cabbages weren’t nearly as large this year and were somewhat more chewed upon but I have half a dozen in the fridge. I got a total of 5 butternut squashes and 5 little spaghetti squashes which isn’t a lot either but we have a pretty small garden. I wouldn’t have had even that many though if I hadn’t hand-pollinated them with a paintbrush! Buzzzz….

The weather has been delightfully warm and mostly sunny since we got home – at least until this afternoon. Now it’s sprinkling a little which is nice because the newly-planted garlic could use some watering in. It actually feels more like early September than nearly mid-October. We’ll be celebrating our Canadian Thanksgiving on Sunday at Thom’s brother’s with nearly all of the immediate family present. And yes, I’m truly thankful for so much! All I have to do is go on one of those camping odysseys to realise that I don’t need anything more than what we already have right here.

(No. We won’t discuss the microwave that finally crashed the minute we got home. And all the “fun” it took to replace it with a reasonable substitute. Do not get me started on the state of Big Box Retail today. For that I am not thankful.)

Welcome home. It sounds like you're doing plenty around there. You had such a long vacation, I'm sure it's been difficult to get back into an everyday pace.
I love your knitting projects. Enjoy!

Glad to see you home in one piece with nothing lost or broken down on the way. I love your new socks & I thought of that canyon picture as soon as I saw them!! And I LOVE your glasses sock. I never, ever thought of that & I'm always shifting between pairs. Must make myself one.

welcome home. beautiful socks just in time for the change in the weather.

Oooohh, that scarf! Ooooh, those socks! And oooooh, that fabric on the later post! You're not getting in any trouble this fall, are you?