I need to mention that most of my crafting is currently on hold and I’m typing this carefully because my dominant right hand is partially out of commission at the moment. Remember the big wood splinter I got in my palm back on my birthday 3 weeks ago? We were helping set up the Littlest Grandbeastie’s Big Girl room and assembling her new bed (which, ahem, came from That Swedish Store). Anyway, it seems as though there is still a part of that splinter rather deeply embedded in my hand in that fleshy mound just below my right forefinger. It isn’t healing and seemed to be getting ever more tender and sore so I went on Friday to my health clinic’s drop-in to get it checked out. Uh-uh. Doc wouldn’t touch it. She consulted with my family doc and he suggested the specialized hand surgery clinic at the hospital. They’d refer me. Meanwhile I’m taking antibiotics against infection and waiting to hear when they can get me in. It’s just a silly sliver not brain surgery, people! Obviously the GPs figure it’s in a delicate area and too tricky for them to tackle. All I want is a functional hand that doesn’t hurt every time I pick something up. Or use my computer mouse. Or tease wool. Or do just about anything really. grOWl. Hopefully this will be resolved very soon. Meanwhile I’m grumpy and frustrated. Can you tell?

I did manage to do a little knitting mostly because it doesn’t actively touch on the ouchie and I was going a little squirrelly. I’m just supposed to avoid too much pressure and to watch for further infection. OK, I can do that and knit as long as I don’t overdo. A sample swatch of my handspun RomneyX: 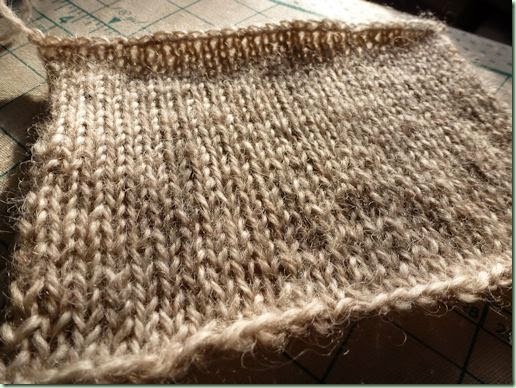 It’s a bit fuzzy and not very soft at all but it has a light crisp handle. I do love the colour which is more uniform than it looks in this sunshine photo. I keep getting flummoxed while trying to describe it: kind of a very pale warm gray. Genetically, coloured sheep are usually either black – which can mean anything from palest gray through mid-grays to brown-black and true black – or brown – which is usually described as “moorit” though that is actually a specific shade of red-brown. Sometimes you can’t tell which genetics dominate unless you can see the actual sheep’s face and legs which gives away their true colour. Also some animals’ fleeces fade with age (or sunlight, but that’s another story). I have no idea how old this particular sheep was but at a guess I’d say not young. In the grease you almost couldn’t tell that the fleece was coloured at all! Once it’s carded and spun it’s pretty much what I would call “oatmeal” – neither gray nor beige but something in between. That isn’t a proper fleece colour term though! Probably the animal was a black sheep even with the warm overtones because of the occasional more definitely-gray lock with no hint of brown.

OK, I’m mousing around too much. Must stop. Come back tomorrow for a special post, my contribution to the blog hop that’s been going around. Meanwhile I’m chanting in my best Lady Macbeth “Out! Out! Damned spot.”

Oh no! Sorry to hear about your hand. It must be frustrating to have limitations on using it.
Your swatch of the RomneyX is beautiful. I love naturally colored wools.

Thanks for the kind thoughts, sweetie! I know I whine a lot so nobody believes that I'm actually a good patient. I have quite a lot of patience! And a fairly high pain threshold too. But when I actually go for help and get the runaround, I expect better treatment. Sheesh. Talk about your mixed messages - "It's too dangerous for us to touch but not important enough for us to get someone right away who can help you". Huh? I'm still waiting. Guess the weekend got in the way.

patience, girl. you need the best hand expert you can get, don't want anyone messing around that doesn't know what they're doing. going to need that hand for a long time yet. hope it gets fixed soon. hugs

You are right, Jean. I know I'm just being a whiny brat. However, now it's going to be at least a week before I can even get a stinkin' appointment! And then more healing before I'm back in commission. At least the antibiotics are helping. I hate taking pills...

Ya think some good soaks in Epsom salts might draw that thing out???? I guess they're worried about that tendon in there & that's an important finger. Still seems like a whole lot of bother for sliver, even if it is deep. By the time you get the appointment, it'll have worked itself out . . .

Nope. Too far down and healed over top. Not budging by itself! Apparently they need to find it with ultrasound. Who knew?

Oh God! Don't they teach them how to use a tweezer in medical school? Same thing happened to me a few years ago and I fired my doctor. The sliver came out on its own after a week of unpleasantness.

Too deep for tweezers or I could have gotten it out myself - even with my left hand! (I've pulled some nasty ones before. It seems to be a habit of mine!) It's a sneaker for sure.