The Update On The Hand Ouchie is…there is no update. Still waiting on getting an appointment. Waiting. And waiting. (Note: Canadian universal healthcare is not really all it’s cracked up to be. But I suppose it’s better than many other alternatives.) However in the meanwhile the antibiotics seem to be doing something useful. Hence the reason that I can babble at you because I can use the mouse more comfortably! Basically I’m bored because so many other activities have been stymied.

So. Have you been following the adventures of Felicia of The Craft Sessions on her Stash Less Project? I could so relate to this:

So I would purchase something I love for a project. Then I wouldn't get around to it and so the materials would sit on the shelf. Over time I would figure out other things I “could” do with that special fabric/yarn and so then there would be multiple options. Then I would get confused over which one was the “best” use of the fabric/yarn and so I would avoid making a decision. And then there would be so many things I would want to use it for I wouldn't want to “waste it” by using it on just one. So I wouldn't use it at all.

Oh. Yes. And she said it so much better than I could! I’ve kind of been following her same thinking – to stash less and stash more mindfully. Also to just use what I already have. It’s easy to justify fabric and pattern purchases when I haven’t bought ready-to-wear (except a couple of pairs of bamboo socks for sock liners and two pairs of fleece-lined leggings) in several years. However, the percentage made up vs the percentage still in stash is tiny! I don’t want to stop stashing entirely but there has to be a plan and that plan has to be a reasonable one that I will stick to.

I think what happened was that before Thom retired 2-1/2 years ago, I was collecting madly while we still had an income. I wanted to make sure I had all the toys and tools and wasn’t going to run out during the coming “lean years” before Old Age Security and pensions kicked in. (There’s still one more year to go before we’re officially seniors and, through luck and good planning, so far we’re doing somewhat better than we thought we would. But still…) Stashing for the future was a good plan in its way but somehow I have a completely incorrect sense of how long it actually takes to make each thing on my list! And sometimes it takes so long that things actually forget what they were going be and decide to become something else instead. Which is just fine, I suppose. Needs and tastes change. However now there are stashes that I know I will never use. And I have no idea what to do about that. Further consideration is necessary.

Anyway we seem to be using less in general and hanging on to what we have as long as possible. We were always careful about the bigger purchases and tried to get good quality that would last. I find that much harder in these days of slap-dash manufacturing where you’re lucky if a toaster lasts 2 years. (Ours is positively ancient!) Will it fill the need and last long enough to justify its cost? Will it please us aesthetically as much as possible? Some people like the constant cycle of new things and enjoy shopping for them. We don’t. Just. So. Much. Junk. Ugh. It’s quite a different story with the crafty supplies! Hence the stashes. Have I just come back around in a circle here? Most likely.

Another concept I have trouble with is FOMO (Fear Of Missing Out). It’s kind of a combination of social construct and marketing ploy. “All the cool girls are making a…” or “Everybody is buying this nifty…” And you can’t help but want to join in and be cool too! So hard to fight the urge. Luckily a lot of what I see is for the younger and slimmer and more retro-inspired so I can let it go. <Insert popular animated movie song here> But some things are harder to ignore. Umm…any pattern by the Tiltons for instance – even if it isn’t something I want to make right away. Or at all. I guess in the scheme of things, succumbing occasionally isn’t a big deal. But it also goes against my rebellious won’t-follow-the-crowd side. Gee, is that a double negative? Now I’m really tying myself up in knots!

Alrighty then. Enough of this babbling. Instead, have a nice photo – or several. These were taken with Ruby, my iTouch, and the Hipstamatic app the other day when it was actually sunny. We went for a good long walk at Colony Farm in Coquitlam. So nice to get outside. I swear you can’t take a bad pic with Hipstamatic. They all look very arty and cool! 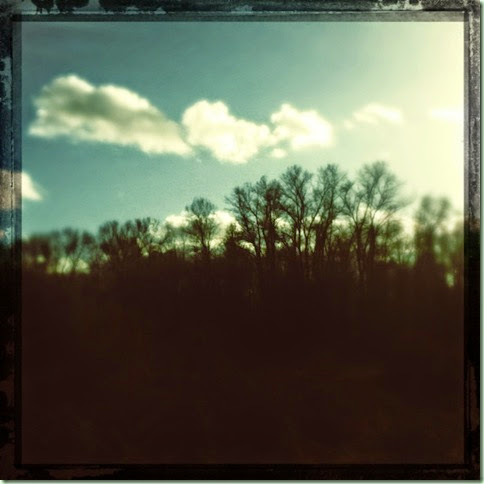 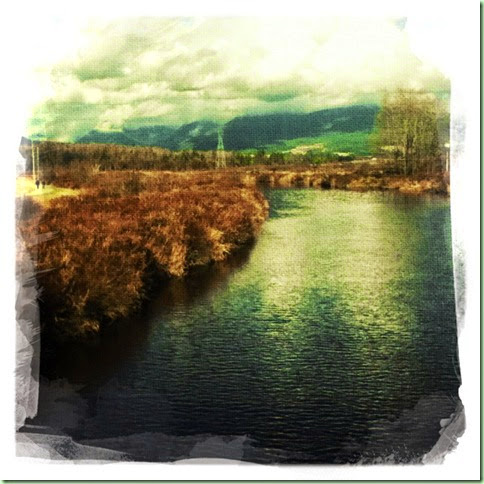 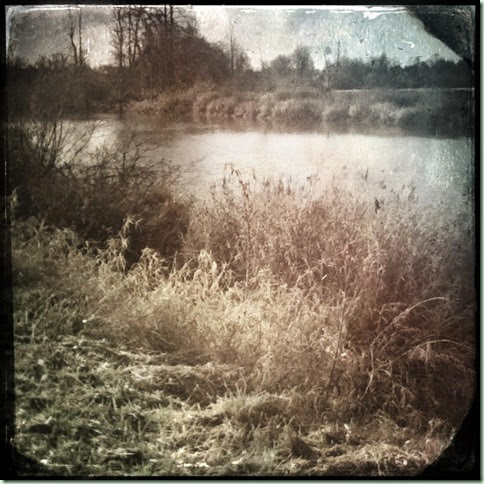 I hear you on the stash front. Mine - mostly fabric and yarn - is way to large. Yet I still buy new for that shiny new project I simply must make. But I have been making quite a few things from my stash lately, so I've made some progress.
Your photos are really cool looking. I hadn't heard of Hipstamatic. It gives a great effect!

Hipstamatic is a really fun app though it seems to have been overtaken by Instagram because that one makes it easier to share and comment online. I just like the arty square photos and all the film/lens options you can get for Hipstamatic. My iTouch is old and doesn't even have a very good camera!