I’ve been happily ensconced in the studio playing with my toys weaving and sewing, alternately. On the loom we have this: 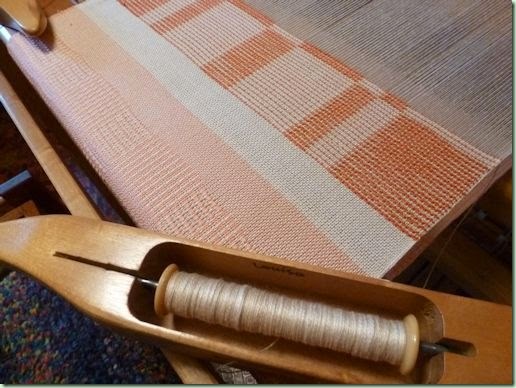 That’s the end of one placemat and the beginning of the second one. I was going to make 2 sets of 4 matching ones but…um…got distracted by all the possibilities on a 4-shaft Summer & Winter threading. Now I think they’re all going to turn out differently! But hopefully relatively coordinating and more-or-less the same size. The first mat, woven with a peach 10/3 mercerised cotton weft, is treadled in a lacy variation. The second one uses a 10/2 mercerised cotton tabby (natural) and an 8/2 rayon pattern weft (orange) and is treadled in pairs. I have more ideas in mind too and it’s a great way to use up dribs and drabs of this and that from the seemingly endless stash. I’m winging it – which is actually quite hard for me! It’s a good exercise.

I’ve also been sewing on the three garments left that I had cut out ages ago. This fabric is a dark cherry-brown heavyweight rayon/lycra ponte knit. I’m making a long-sleeved T-shirt dress with a flared skirt, straight-legged pull-on pants and, just to use up the last scraps, a short-sleeved yoked T-shirt. I’m happy to sew all the garments from the same fabric at once so I don’t have to change threads! The patterns are all my own drafts so I can’t give you pattern number references. They’re pretty basic pieces – nothing fancy at all. I hope to have them finished fairly speedily.

Even though the dress was cut from my standard knit sloper I’m having a little trouble with the fit of the back sleeve cap. Since it’s been awhile from when I cut it out, I can’t think why there’s a problem unless it’s because this fabric is quite beefy and just doesn’t want to smooth out nicely. My rounded back and shoulders don’t fill it out very well and I may try to take the area in just a hair to see if that helps eliminate some of the poof. Just one of the curses of aging, huh? The body tends to rearrange itself in weird and wonderful ways. Not fun but I definitely prefer it to the alternative.

On Thursday, our Spectrum Study Group met to begin a new project, stitched shibori. We’ve tried several types of shibori before but didn’t get into it too heavily. This time we’re determined to stick with it for several months as a group and then set up a quick indigo vat to dye the pieces. I’m working on hemming a long narrow scarf cut from the width of the super lightweight silk/wool twill that I bought at Dharma. Then I’ll fold it and try stitching on it and see how it turns out before I use any more of the two-yard piece I have. Then there’s the handkerchiefs that I got at Dharma to stitch on and I may have some napkins also if I can find them. At least I’m trying to come up with useful samples instead of the bits and snippets I usually end up with. I hope I don’t run out of steam before I get enough stitched. That’s what usually happens because I don’t enjoy hand-stitching as much. I get bored too quickly. Oddly enough I can knit swathes of boring stockinette with no problem.

Which brings me to the fact that I finished the Antelope Canyon Socks: 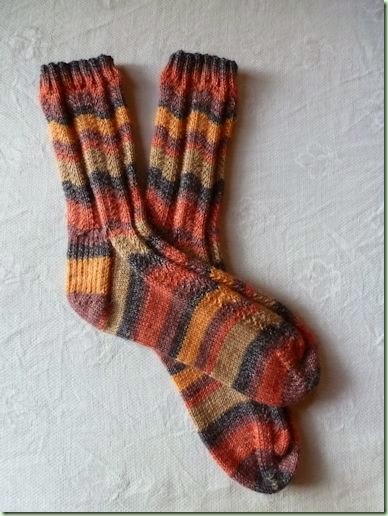 I’m feeling too lazy to repeat all the details which are on my Ravelry page here. Everyone has a Ravelry membership now, don’t they? You should! My only complaint is that these socks are not as stretchy as they might be not only because of the stitch pattern but because of the cotton content (along with the usual wool and nylon) so they are a bit tricksy to get on and off. Fit fine once they’re on though but they’re also a little harsh under the foot so not good for long walks. Oh well. They do remind me strongly of their inspiration place which was the whole point of the exercise anyway.

What else? I’m feeling the need to start a spinning project soon. I’ve only got one knitting project on the go at the moment (the Silken Haruni Shawlette) which is about 1/3 done now. Then I have a gift to make that involves spinning and knitting but I also want to begin a Major Project – another sweater for Thom. He loves his last one, the Brownstone, so much but that was made way back in 2011 now. I’ve made myself at least 10 sweaters since then! Not all handspun of course but still that’s a lot. I have an oatmeal-coloured fleece (Romney-X, I think) that might work. I know there’s got to be something appropriate in that humungous spinning stash! This will not be a quick make. But it’s the process that I enjoy. Sampling will ensue.

Meanwhile, the weather has still been really changeable. Rain and wind one minute and sunny the next. The temperature is still well above freezing though it’s supposed to head downward soon. I managed to get the dye garden cleaned up and a cover crop of rye and vetch planted in the annuals’ places but I don’t know how well that’s going to grow this late in the season. Also the birds are helping themselves to the seeds! (A fine thank-you for all the feeders we have around here, huh?) I didn’t ever get around to digging up the madder so I guess it’s going to stay until next fall. It’ll just grow bigger and better roots, right? Right. There’s lots more to do in the garden but it’s not calling to me as loudly as the studio is.

Speaking of bird feeders, we’ve had regular visits from several Anna’s hummingbirds to our nectar feeder. They overwinter here and have their babies in early spring before the rufous hummingbirds arrive back from their winter holiday in Mexico. This is our first year with this type of feeder so it’s a new thing for us. I love watching these little jewels dart about and argue over who gets the sugar-water first! Another bigger jewel is the midnight-blue Stellar’s jay who has been nearly emptying our seed feeder along with the usual chickadees, juncos, sparrows and finches. The suet feeder is attracting the daily round of bush tits and I even saw a downy woodpecker try to figure out how to get through the protective squirrel mesh to get at the suet. He has to get his head and beak in the just right way to reach it because his body is too big to fit. Almost as much fun as watching the flickers try to eat at the seed feeder with their tail propping on the pole and their head twisted at an angle to get their long bill in. It’s rather awkward. And amusing – at least to me.

I know. I’m famous for my weird sense of humour. More soon! Off to play work on the dress.

Just like usual, you have your hands in many projects! A good thing, as boredom can never ensue if you've got lots going on.
Your socks came out so nice. I have one pair of a cotton/wool blend that stretch out every time I wear them. Thankfully, a was and tumble in the dryer shrinks them back to normal. I hope your pair doesn't do the same thing. It's hard to keep them straight when they stretch out!

Stretching out some would be a good thing, Dixie! Then it wouldn't take such a wiggle and a squiggle to get them on. Perhaps being a little tight is what socks with cotton content need to fit better?

ooo, ooo I'm excited to hear about your group working on stitched shibori. And indigo too. Can't wait to see what you get going. The socks came out so beautiful, you could frame them if they're too tight.

weaving looks great. It is boring to weave four items all the same, I do the same thing - wander off trying out different treadings and colours, much more fun. Socks are pretty spiffy, just keep them on and show them off!