Look what the Frost Fairies brought us: 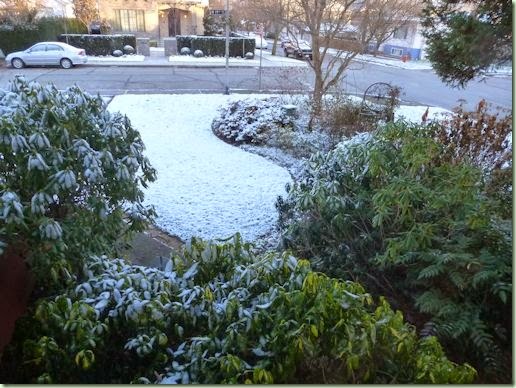 First Snow! Poor Anna (the hummingbirds are all called Anna) found her feeder frozen so Thom carefully thawed it out. I suspect this may be an ongoing task this winter when the temps drop below freezing.

So the update on The Hand is that I have an appointment with the surgeon on Friday morning, more than a month after I got the splinter. Sheesh. I’d better not get put off any further because I’m going just a little squirrely here. I can knit (carefully) but anything where I have to grip with my whole hand is out. That includes rotary cutting and ironing (no sewing), sweeping/raking/vacuuming (no cleaning), teasing and carding wool (no spinning unless the fibre is already prepared) and a bunch of other things that remind me sharply if I forget. I’m also running out of antibiotics which concerns me mightily. I’m attempting to hang in there for another week. There will likely be more whinging from me in the meanwhile.

I did manage to spin up another sample of the RomneyX that had already been teased and carded. I know that I thought I had the definitive yarn already but…I’ve changed my mind. You can blame this issue of PLY magazine that I borrowed from my kind friend Jo Anne: 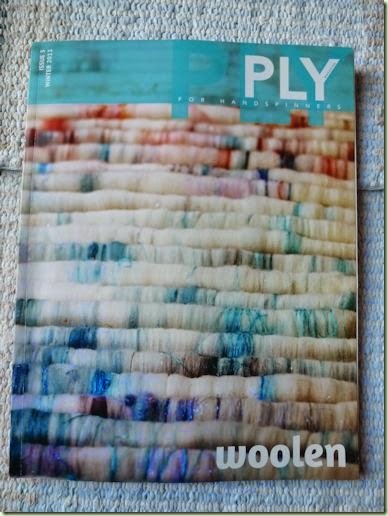 Have you heard of PLY? It’s an actual paper magazine edited by the indomitable Jacey Boggs and comes out 4 times a year with themed issues. It’s very good and I’ve learned some new tricks. This one kicked me into overdrive since I’m notoriously crappy at woolen spinning. Long draw has long escaped me up to know except on a charkha or a great wheel where I spin with one hand and turn the wheel with the other. There were a bunch of great articles in this issue but this one: 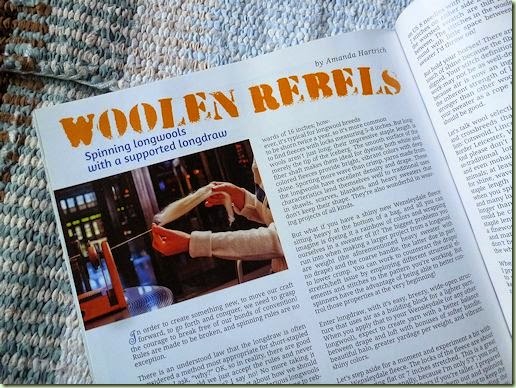 “Woolen Rebels” by Amanda Hartrich is the one that got me thinking. The RomneyX is definitely a longwool and one that could benefit from an airy woolen spin in order to keep it light and soft or else it quickly turns into harsh carpet yarn. She said all I had to do was let the twist in and draw back! It worked. I did it! Only took me nearly 40 years of spinning before I could finally do a supported long-draw like all the cool girls. It’s fast too – much faster than Ann Field’s “drafting to the crimp” short forward draw. The resulting two-ply is somewhat thicker than the first sample but definitely softer than the second one (which I never even bothered to knit up). Here they are in order, with the most recent sample on the right: 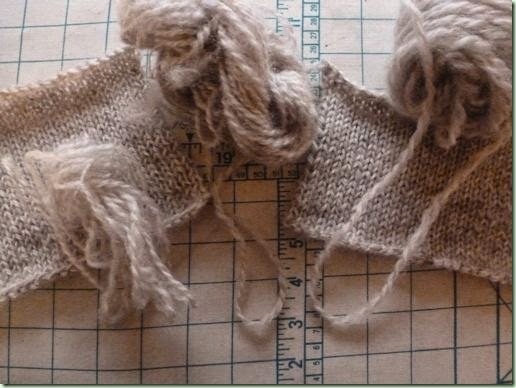 Here’s the yarns close-up and close to life-sized so you can see the differences better: 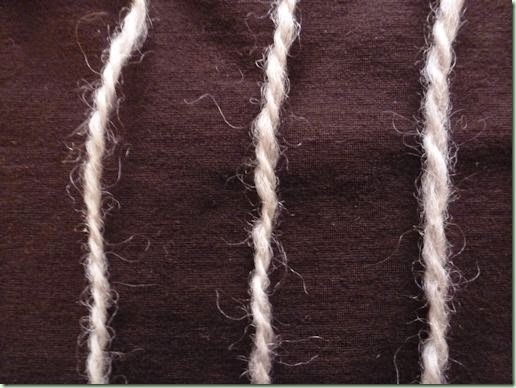 The final twist is much closer to the crimps per inch too. Here’s a clearer photo of the knitted and blocked swatch: 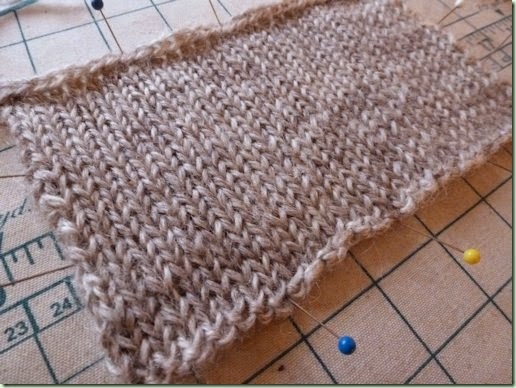 I used the same 4.5mm needles as before for a more solid gauge on this thicker yarn. The feel is definitely denser and less drapey than the first knitted swatch and it also has some halo. It reminds me of the feel of Lopi or White Buffalo unspun yarns even though it does have twist and ply. I think it will make a warm but hopefully not too heavy outerwear sweater for Thom. However, since it’ll be awhile still before I can move forward on this project I hope I can remember how to match the sample spinning!

Heading out shortly to the Littlest Grandbeastie’s 4th birthday party. A Princess Tea Party to be precise. I’m staying far away from the bed that bit me. More soon!

Winter came to us on Wednesday, in the form of sleet, freezing rain and snow totaling 6 inches. Plus a 4-hour power outage Wednesday afternoon. Not a fun way to start the long weekend, but it's been ok since. Your photo of the snow is really pretty!

we got about the same dusting, I'm hoping that's all! but somehow doubt it. will keep my fingers crossed for a good outcome with the Dr.

A couple of inches out here in Surrey which melted somewhat in the brilliant sunshine on Sunday. One of my pals had to move a 40' travel trailer to Langley & just about lost it in a sheet of ice at a major intersection!!! It's -15 with the windchill in Hope today so I'm happy with our little -3. I think most of the snow is gone out there but I'll bet it's all laying on the roads as black ice . . . stay home & keep warm. Glad to hear you have an appointment. I'm still waiting for mine - since July.

That photo was taken out my living room window. Snow is so pretty! Unless you have to go somewhere in it. Luckily that's His problem since I don't drive.

Sorry to hear you're still waiting, Sharon. It seems unless you yell a whole lot or are imminently at death's door, it takes awhile. And then they wonder at you why it took so long? Bite. Me.

Drat, and here I was thinking I could always move up to Canada for better health care. I guess it'll have to be France now.

Will trade your snow and temps for mine and throw in a pair of gloves. Got down to -34 and well over 20 inches of snow, difficult to get around. Has now warmed up to a mere -15°, almost balmy.

Ooh, I LOVE your gloves, Lynne! They are totally fabulous. If only my poor plants would survive your temps you'd be on. Having trouble mollycoddling my rosemary as it is!

Hope everybody stays warm and safe and with the power on! And healthy would be good too. Sorry to disillusion you, pao. Our health system is pretty good but not exactly perfect. But just think - if you went to France you'd have to learn French! Here in Western Canada it's pretty much an option. LOL!!