Well. What has damselfly been up to? Last Friday I went with 3 friends (2 old, one new) out to Cloverdale to Fibres West, a celebration of all things woolly and wonderful. You know I don’t need anything to add to the Stash but that didn’t stop me from falling in love with a few things. Nope. Not at all. I surprised myself though by not buying any yarns this time but got spinning fibres in roving form instead.

The first thing that caught my eye right away was this lovely blue-gray alpaca: 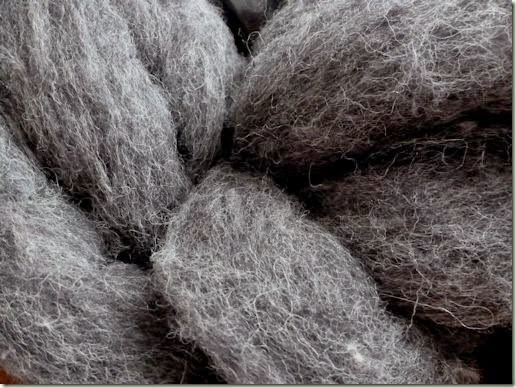 It came from Alpaca Story Ranch, near 100 Mile House in BC’s interior. Joni, the farmer, told me that this natural colour is a blend of 3 different huacaya alpacas and that she gets her fleeces processed at a mill in Alberta. There’s a few neps and noils but I think it’ll make a lovely sweater. I got 500g so there’s quite a lot. Maybe even two projects depending on how fine I spin it.

Next I wandered up and down the isles of bright goodies stopping to chat with old friends and exchange hugs. That’s the best part of this festival! I was so happy to see my former lace teacher, Lenka Suchanek, and her handsome goateed husband, Libor, whom I haven’t seen in at least a decade. Her specialty is wire lace sculpture and she has just returned to teaching after a 7-year hiatus. I also visited with an old beading buddy, Ania from Turtle Beads. She was actually the person who taught Thom how to do lampworking many years ago. I wear one of her wee turtle beads on my Guild nametag at every meeting! It’s amazing to me how none of these people has aged a day. Not even me. Heh.

I visited Birkeland Bros Wool for old time’s sake (before the business was moved out to Abbotsford it was my LYS only 3 blocks away). I picked up some more dyed black Perendale which seems to be a handy thing to blend with other fibres: 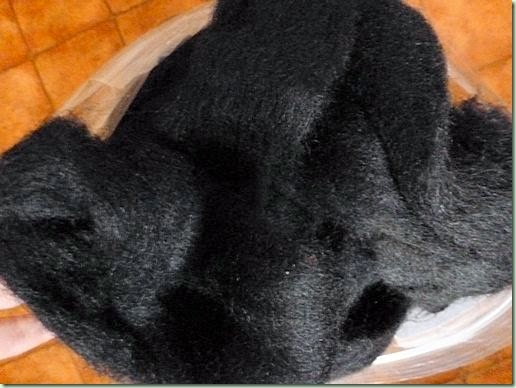 Their prices are always so reasonable. I have some experimenting to do some day soon! And as we were leaving my very last-minute purchase was some interesting tweedy Falkland roving from Knitopia (sorry, no working links). It’s a lovely mahogany red-brown colour but actually contains dyed fibres of many different colours blended together. Lynne had quite a few different blends but this one spoke my name: 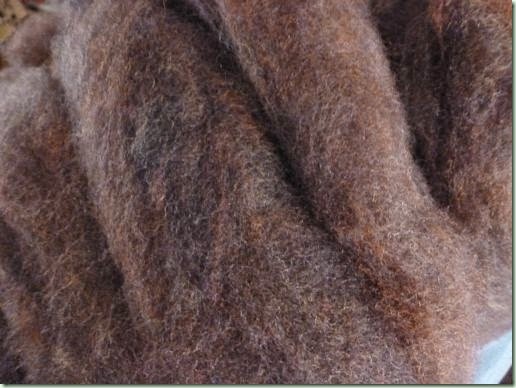 The photo doesn’t nearly do it justice. And that’s all I bought! Obviously I have sweaters in mind for my future spinning efforts. I really enjoy making and wearing the ones with handspun. Even though it takes 3 times as long to make anything, the yarns are so crisp and alive and personal! It’s hard to go back to commercial yarns afterward. I’ve started swatching for a new project but ran into a problem. More about that anon.

In other crafty news, Thom and I are working on our project for a multi-guild craft exhibition with a deadline of April 1. Yikes! He’s making one of his cigar box guitars and I’m supposed to be making a tabletwoven guitar strap for it. I finally have the pattern: 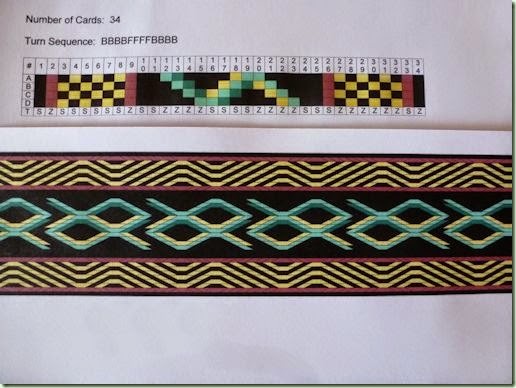 I’m calling it Pisces because it looks like 2 fish swimming in opposite directions. Here’s the yarn, or actually thread, selection: 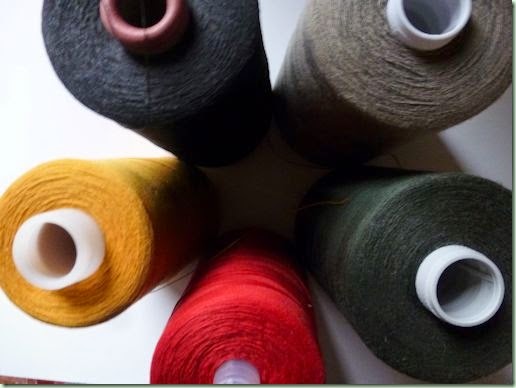 That odd colour in the upper right is kind of a greenish tan instead of the brighter light green I would have preferred but it goes well with the cigar box. Now I have to wind a warp and thread the tablets and then we’ll see if it’s going to work. No point in doing a sample first. It would take just as long as setting up the whole thing so I’ll just add some warp length for testing and getting familiar with the pattern. This is one of the “threaded-in” type patterns with a simple turning sequence of 4 forward and 8 back. Since it’s uneven, twice as much in one direction than the other, I’ll probably have to reverse somewhere in the middle because I wasn’t planning to add swivels to release the twist build-up. I was trying to keep this whole thing simple. Right.

What else? I still need to plant more seedlings under the lights. I have all the cool weather things coming up: salad greens and reds, kale, cabbage, gai lan and some herbs. The parsley isn’t up yet. It’s soooo slow. I need to get the flower seeds and the Japanese indigo going, probably today. Then later in the month the more warm weather stuff can start. It’s an ongoing process.

The weather remains quite warm for this time of year, but yesterday and today there are drizzles. I’ve had an ongoing migraine thanks to the changing pressures. Blech. Hopefully it will go away or at least down to a slight buzz very soon. Still attempting to get things done anyway but with a muzzy head. Moving along s l o w l y.

The black Perendale looks almost good enuff to eat. Conga Rats for buying just spinnable fibres. Wishing I could have come down but 500 miles each way made me rethink.

Kind of a long way to come indeed, but it would have been nice to see you, Lynne! However, BB does mail order if you must have your own Perendale. They have more dyed colours too and also softer dyed merino.

I do like that blue/grey alpaca. Just my color - goes with all the Menopause Purple I own!! Did want to go on Friday but decided I have enough stuff & what I don't see, I won't get out a credit card for. Sigh. But I have made a note of where that alpaca came from. LOL

Any opportunity to buy fiber is a festival, in my opinion. Looks like you had some fun shopping as well as visiting with old friends. I'm sure we'll be seeing these rovings again in various states of twistedness. Enjoy!