I have been busy. There’s some actual weaving to show you today! See? 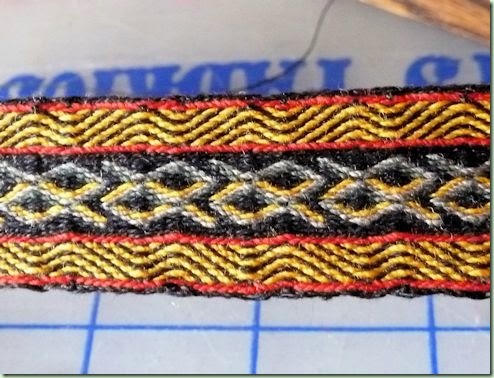 And here’s what it looks like on the back: 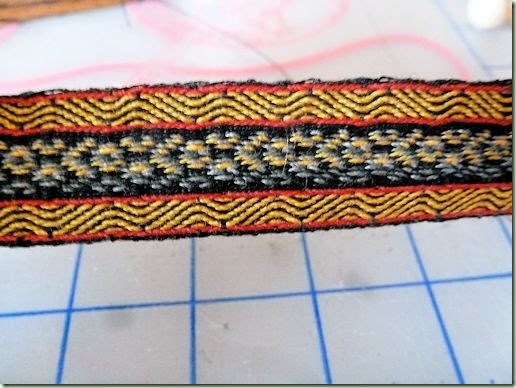 No fishies there! But the waves are still flowing. The band is only about 7/8” wide which I think is just about perfect for a cigar box guitar strap. I’m not finished yet but I’ve woven about 15” so far which is a good start. The guitar isn’t done yet either! We only have until April 1 to finish this combination project so we are putting it on the Top Priority List. We also have to photograph the piece and write bios and an artists’ statement which is going to take some work to get right. I hate Artspeak! It will be in plain English, so there.

Tablet weaving (often referred to as card weaving) is something I’ve dabbled with in the past. It’s an extremely simple and inexpensive setup. All you really need to get started are a couple of clamps, a deck of cards, a hole punch, a ruler, scissors and some crochet cotton. If you don’t already have these items about you could get everything you needed at the dollar store! On the other hand, the weaving possibilities are pretty much endless: from the very easy to the very complicated. As these things go, my Pisces band is on the easy side. Here’s my setup: 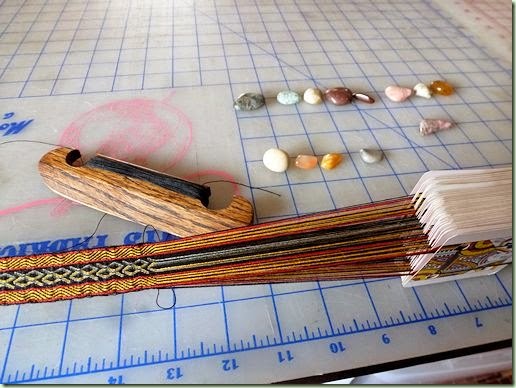 Thom made my lovely oak shuttle but you could use a small ruler instead. You can purchase ready-made cards but I like the size of the playing card ones and they really only take a few minutes to make. One end of the warp is attached to a peg clamped to the end of the table: Here you can see the messy end where I was getting the tension smoothed out and had to fix a tablet that got turned around. You can pretty much see exactly where things came together and my hands remembered how to move. That end no longer looks like this because I’ve woven more of the band length. It’s now wrapped around the peg and secured with a large safety pin. The other end of the warp is weighted: 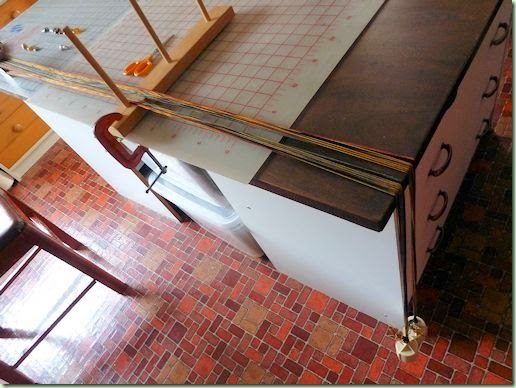 Those are knitting machine weights hooked on. You can attach the end of the warp to a peg as I did on the other end and just shift it forward as the warp takes up but this system is more flexible and takes less fussing. The second peg system clamped there is just to raise the warp off the table so the tablets don’t all flop over. In this photo also you can see the twist already beginning to build up on the opposite side of the tablet deck from the weaving. I periodically need to reverse the weave direction to untwist or else I would have to work the excess twist down to the end with the weights and allow each tablet’s warp to untwist individually. I prefer to let the fishies swim backwards sometimes! 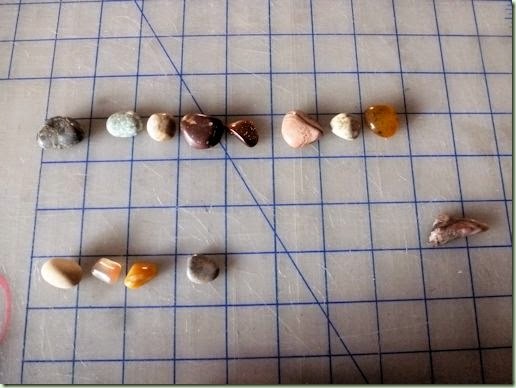 This is my mnemonic counting system. The pointy arrow shows in which direction I’m turning the deck. The turns are FFFFBBBBBBBB so the lower row of 4 is the forward row. I move one pebble at a time as I weave each forward pick. When I get to the last pebble, I turn the pointer and begin the 8 backwards picks. It really helps me remember what I’m doing when my brain starts wandering! If I was only doing 4 forward/4 back I would probably only need one row of pebbles.

The trick with getting the band’s width consistent is to leave a little loop of weft sticking out the edge, turn the tablets, insert the shuttle and beat, then gently tug the loop up snug, leave a new loop and repeat the sequence. You can see this loop in the photo third down from the top of the post. It also helps to measure the band every so often just to make sure you aren’t pulling in too tightly or getting too loose. Yes, the going is slow with tablet weaving but I find it rather fun. More on our Combined Crafts Project soon. The guitar is a knockout so far!

What else? I got tired of weaving so I tried spinning up a sample skein of the blue-gray alpaca roving that I bought at Fibres West. So so disappointing! It’s VERY full of neps and noils – much more so than I originally thought! See? 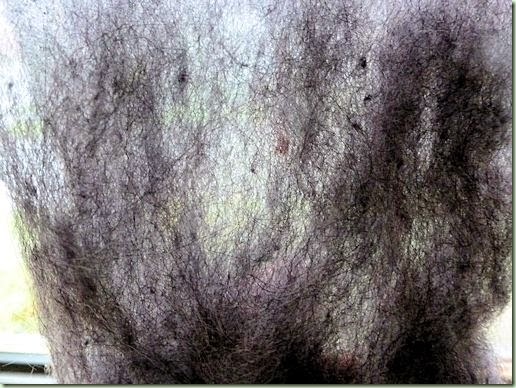 It was not particularly cheap either. Yeah, I know. Buyer beware and all that. I have contacted the seller and suggested that she needs to consult with her mill on better ways to process her fibre because this is really unacceptable. Either the carding cloth is too coarse or they are going too quickly which causes the noils to spring back. It’s still usable but I get more of a tweedy yarn than I was expecting and I can’t spin it very fine. I was hoping for a 3-ply but that would be thicker than I want. This little 2-ply sample skein is about DK weight: 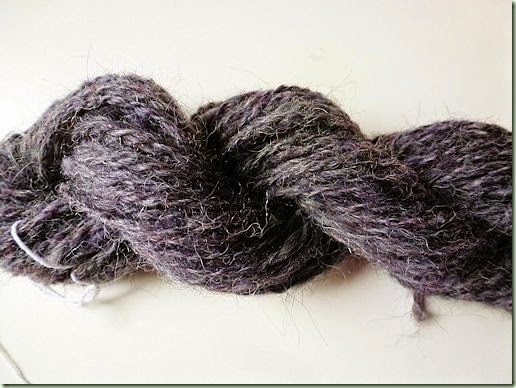 In its favour the yarn is quite soft and lofty and a gorgeous colour. I’ll be knitting up a sample swatch as soon as I wind this into a ball.

Well, it’s raining today and I have to go weave my daily quota of the Pisces band before the weavers’ guild meeting tonight. More soon!

The band is absolutely beautiful! I have never done tablet weaving - it boggles my mind. And too bad about the neps in your fibre - it does look lovely though, all spun up.