The mystery of the armhole depth has been solved! Putting my poor Little Black Cardi in time-out for awhile gave me some clarity on solving the problem. I took it up to my studio cutting table and carefully laid it out. I measured and compared it to the purchased cotton jersey sweater that I’m attempting to replace. The armhole was indeed two full inches longer than it should have been. In fact, it was exactly two of the lace pattern repeats too long. Hummm…back to the instructions.

As I’ve mentioned before the pattern is Trellis by Lili Comme Tout (aka Julie Partie): 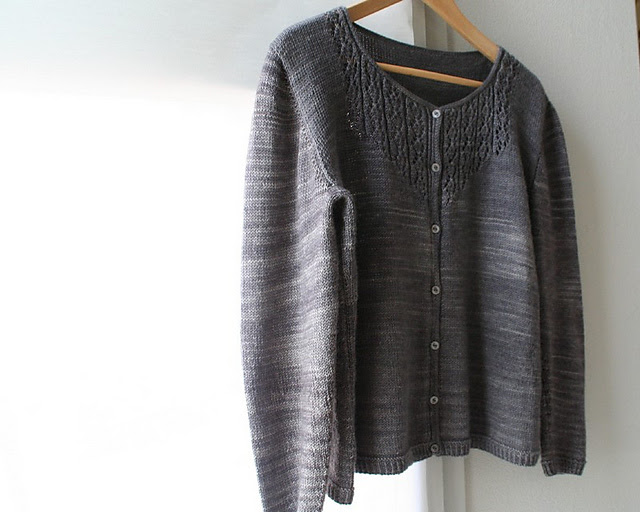 It’s quite clearly and professionally written (available in French or English) which one should expect from a paid knitting pattern. The size range is quite comprehensive: XS, S, M, L, XL, 2XL, 3XL. I’m making the L which almost exactly matches my body measurements with 0 ease. Apart from knitting the body 1” shorter than the stated 15”, I’m following – or attempting to follow – the pattern exactly as written. So why was my armhole so far out of whack?

Tracking carefully I think I’ve found an error in the pattern. There are two different lace bib charts, one for the smaller sizes and one for the larger ones. My L is in the middle and I think what Julie did was to write the directions as if one was supposed to use the smaller chart but instead changed her mind and put the size L on the larger chart. I agree that the scale of the larger lace bib works better on the L. But how do I know the instructions are for the smaller chart? Because it is 2 lace repeats shorter, the exact amount that I needed to make my armhole come out the right size. Oh look. A clue.

So armed with that knowledge, going back and extrapolating what I should have done was actually quite easy. I needed to begin the lace two pattern repeats earlier, before the armhole instead of after it. Which of course meant ripping back the right front (again!), the half-inch of the back that I had already knit, and about an inch-and-a-half of the body. Whew! Luckily I hadn’t gone any further thinking it was all going to work out because I had followed the instructions correctly! Instead I grumpily dropped it like a hot potato until I had the time and brain power to figure out what went wrong. I knew I could fix it somehow but who knew it was actually easy?

The sweater is back in progress again. I hope the kinky yarn isn’t going to give me tension problems because I can’t fix it while it’s still attached to the knitting. Meanwhile, I have a message in to the designer on Ravelry to see if she is aware of the problem. I’m curious to see if I hear back. Nobody else has reported a problem, including her test knitters but maybe nobody knit a size L. Or maybe switching to the larger chart for that size was a later development. One good thing about Ravelry is you can at least attempt to contact the designer directly with a problem. Whether or not they respond though is up to them though. For me at least it’s not critical because I’ve solved my problem myself. Might have saved a lot of frustrated frogging and reknitting however!

So here we are - another lovely but chilly day in Lotus Land! I got a little gardening done on Monday afternoon but The Hand was protesting somewhat yesterday so I’m still going to need to take it slow and build up. Thom got the pea nets put up so I can plant them soon. We had frost this morning though so I’m not in a huge hurry. If they go in too soon, they grow much slower than if I wait a few weeks. I also need to go to the garden shop and get some more seedling mix for my indoor starters and sea soil for the veggie patch. The kids already have their orders in to Mom’s Grow-Op! We’re still eating some of last year’s harvest, like the spaghetti squash we had for dinner last night. And some of this year’s harvest too: kale buds, chives and tiny lamb’s lettuce (aka corn salad or mâche). The rhubarb is coming up, you can just see the tips of asparagus and the garlic is about a foot tall. Moving right along here.

But back to my knitting. I’ve been alternating on the Oakmeal Sweater’s sleeve-lengthening and this cardi. At least I can see the black yarn in the good light!