A commenter recently asked about what I plant in my dye garden. I didn’t forget but this is not going to be quite as elaborate a post as I originally planned. However, since it’s only spring and nothing has been happening in the dyepots recently, this will be but a first instalment. Dyeing with plants is an ongoing experiment anyhow.

So here’s what the dye garden looks like currently: 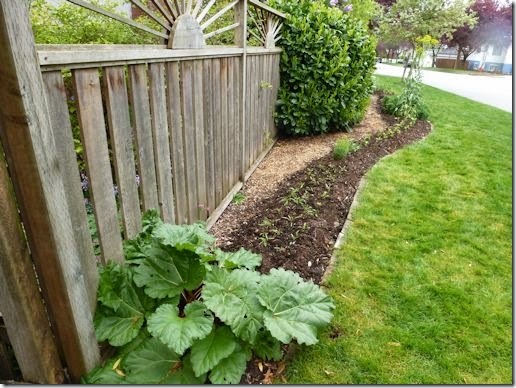 It’s a long narrow bed dug out of the city boulevard (local term for the space between the side of our property and the street, aka “verge” in British terms). There is no sidewalk on our block though people walk along here on the grass, usually with a dog or several. Our city is very encouraging about planting and caring for common property like this so it’s not a naughty thing to do. Thom mows the grass/moss and carefully digs out the buttercups and dandelions. For all the city cares I could dig the whole thing up and plant potatoes on it! I won’t though. It’s tough enough keeping the dogs out of my garden as it is.

So first up we have rhubarb. Besides eating the stalks, the leaves make a mordant that works best with animal fibres. They contain oxalic acid which is a poison so you must be reasonably cautious when using it. It’s not toxic once the fibre is rinsed though. The leaves have some colour of their own so it will affect the shade you get when dyeing over it. The roots are also a strong warm yellow dye used with a mordant. You can harvest them when you dig up the crowns to divide them every few years. Note that this is not the only rhubarb plant in my garden. We have 3 or 4 more near the veggie patch.

Then there are the coreopsis (tickseed) of which I have 3 varieties. Dyer’s coreopsis is the workhorse, even though it’s an annual and I have to replant every year. I can easily save the seeds so I don’t have to buy any. The flowers with alum mordant and various after-dips give me yellow, gold, orange and rust and they contain a lot of dye for their weight. They’re tedious to pick but they dry easily to save for later. The whole plant has colour so if you want you can chop them up for a dyepot at the end of the season. These little guys are still babies. 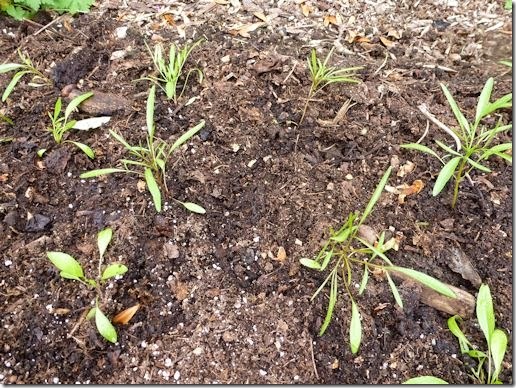 The perennial coreopsis are new to my garden. This one is the threadleaf variety, recently transplanted from my mother-in-law’s garden: 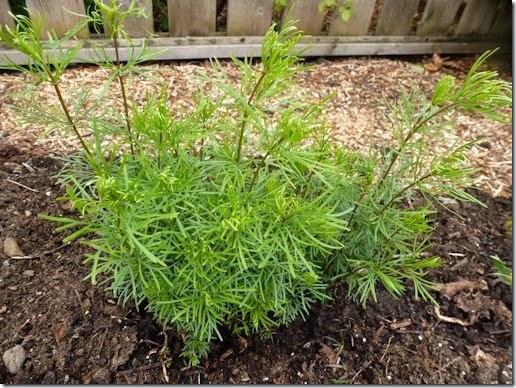 I plan to try the flowers and the leaves for eco-dyeing along with the second perennial variety, grandiflora: 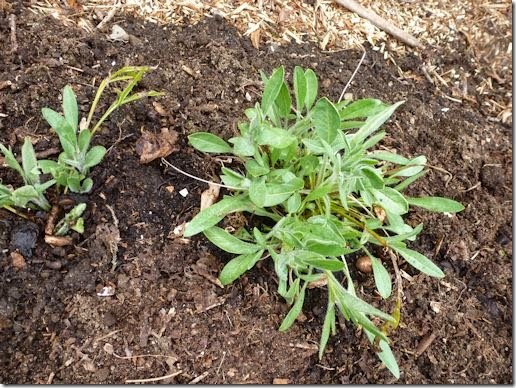 I planted these from seeds last year and so far I haven’t had any flowers to try. We’ll see if they’re worth the space in my garden!

Next we have the baby Japanese indigos: 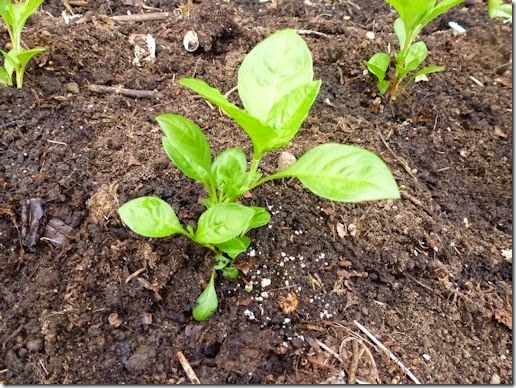 I planted a lot of these this year because I’m not growing woad right now, which is my other source for blue. Because my garden is so small I don’t get enough plants to dry the leaves and compost them for proper indigo so I use them fresh instead. (Instruction links are on my new Tutorials page at the top of this blog.) It doesn’t give me quite as dark shades as a normal indigo vat might but I can get a nice medium blue and also overdye for other colours.

Next we have my one last-year’s woad which I’m leaving to flower for fresh seeds: 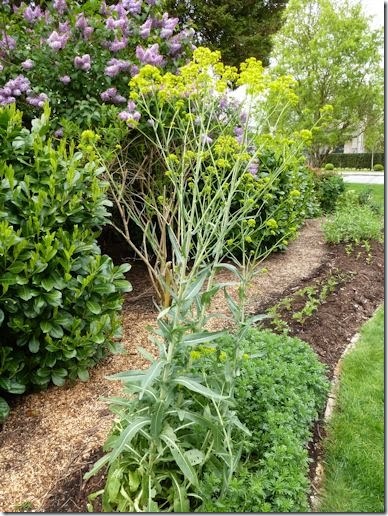 The flowers are so pretty and the bees like them a lot. Behind the woad you can see my expanding patch of dyer’s chamomile (aka golden marguerite). It’s an aromatic plant that stays somewhat green all winter here. Sadly this variety is “Sauce Hollandaise” which has white flowers instead of yellow and so isn’t very good for dye. I’ll probably move it somewhere else in the garden eventually.

Behind that are marigolds, which I also grow in other parts of my garden wherever there is space. Marigold flowers with alum mordant and various after-dips give yellow and gold colours and the leaves can give brassy olive shades. I pick the flowers when they are partially spent and freeze them because they don’t dry well for me. I also think they give better colour fresh or frozen than when they are dried. Marigolds are easy to grow or purchase from nurseries and the seeds are very easy to save. Here they are bothered by slugs and snails which can totally decimate a plant if it’s not protected with slug bait. We try to use an organic type.

Beyond the marigolds are more Japanese indigo which I won’t pick so as to let them flower as early as possible. I learned that trick a few years ago and now I get mature seeds before frost kills the plants. As I’ve mentioned before, these seeds are only viable for a short time so saving seed each year is a must. They’re very hard to come by. I usually have extra though so if anyone wants some, contact me. It’s getting pretty late for this year unfortunately.

In between the marigolds and the second patch of indigo is a space where I will plant some baby weld. This needs a second year to mature and is the best source for a colourfast clear yellow with alum. I don’t actually need any weld because I have bagsful of the dried stuff but I do need to refresh my seeds.

Lastly, there is the madder, my only source for reds: 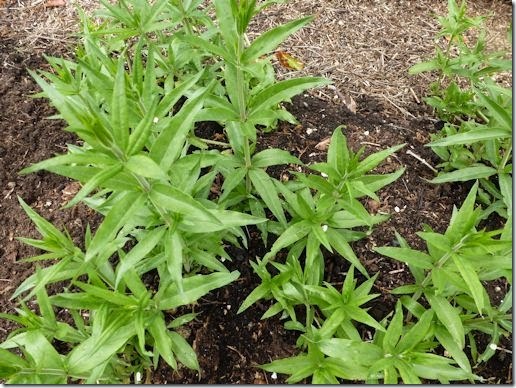 I should have dug them up last fall and divided the crowns but I didn’t. It takes time to grow good-sized roots so I only can get a single madder pot once every two or three years out of a 6-foot patch. I would love to have enough so I could dig 1/3 of the plants up every year but sadly lack the room. These are not pretty plants and are scratchy and sprawling. The upper plant parts have some colour in them as well so conceivably you could harvest the tops before they die back in fall but I’ve never tried it.

So there you have it! Other dye plants on my property include walnut, blackberry, Oregon grape, smoke bush (Cotinus coggygyria), and black-eyed susans. I get browns and tans from the walnut husks and greys from the blackberry shoots but the rest are just more yellows so I don’t really bother with them. I’m sure there’s lots more plants I could grow for colour but I’ve got a pretty nice palette going in the space that I’ve got. Anything else that you think I should consider?

what a lovely collection. you are far ahead of me, the only extra i grow is purple/black hollyhocks, they are tall and do well at the back of the border. They freeze well and give good colour when placed in the dye pot while still frozen. don't know how you trust the plants to the neighborhood dogs and their humans. Hope the sun continues to shine. :)

Thanks, Jean! I've thought about hollyhocks but they don't really do very well for me. Thanks to my monster nut trees I don't have a lot of really sunny spots to put them. Might try a couple next year though.

I DON'T trust the humans at all! Don't really blame the dogs because most of them are on a leash and they still trample through my garden. Just who's fault is that anyhow?

I have made much the same choices as you. I also enjoy daffodils, though the flowers dye yellow, they give a gorgeous olive green with iron, but most of all, they are flowering long before the main crop of dye plants, a real sign of spring and there is no need to take the petals until they are going over, when it is a good idea to dead head the plants anyway. Enjoyed your blog, such a well tended garden is a pleasure to see.

I am green (and yellow and blue and all the other natural dye colours) with envy--i miss gardening in BC!!!!!!!!!!!