Wow! It’s sure been awhile, hasn’t it? What has that damselfly been up to? And where does the time go in such a goshdurn hurry?

Well first of all, I've been having trouble with Windows Live Writer, the no-longer-supported program that I use to post to this blog. It refuses to connect with Blogger. Grrr...Which means that I have to use Blogger's terrible-horrible-no-good-online composition page. It sucks. So please pardon any wonkiness. 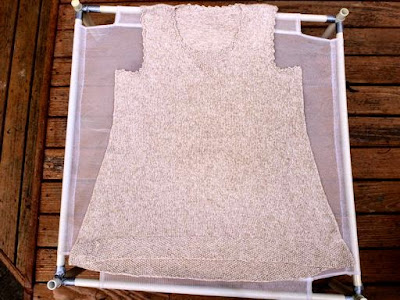 I think it turned out OK though I really should have given myself a little more ease in the body. However I’m certainly not going to be ripping it back! That was a stinkin’ LOT of knitting right there. Here’s a detail of the neckline: 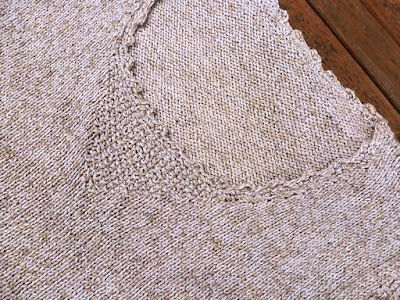 I think it’s delicate without being too cutesy, don’t you? After I blocked the tunic and it dried I had to steam the side folds out because they were just too obvious. I probably should have moved the knitting around more as it dried and refolded it differently each time. All the ingredient yarns (linen, silk and rayon) tend to take a crisp press – not exactly what that nice sweep of the hem calls for. I’ll try to get another photo on me. Eventually. Or if nothing else, on Debbie. I need to show you the cute back feature.

So the other things I’ve been up to are somewhat destructive. The constructive part comes later! First I took all my knitting and crochet books and magazines off the shelves in order to rearrange them. This was just over halfway through the mess: 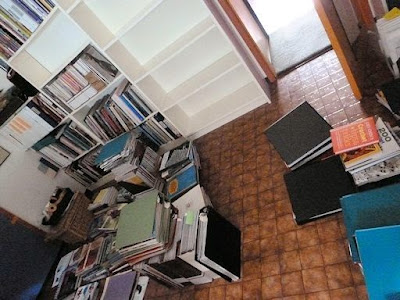 Note To Self: I have way too many books and magazines! Nothing more comes in unless something else goes out.

This took 3 days to finish cleaning up. Books are heavy and my hands got tired so I took frequent breaks. There’s still a small pile of miscellaneous vintage magazines that I’m trying to decide what to do with. I suppose most of them will probably end up in the recycling. The late ‘70’s/early ‘80’s styles are awfully hideous and there’s not much in the way of real information in them anyway. I have to draw the line somewhere! My shelves are full.

I’ve also been taking a few things to the frog pond. I knit this Ribbon Jacket in 2006: 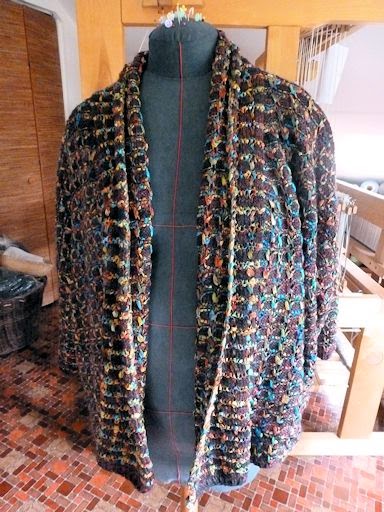 It’s handspun wool and ribbon yarn. The pattern is by Sally Melville from the book “The Knitting Experience: Book 3 Color”, originally entitled Little Squares (in Ravelry here). I never wear this anymore because it just feels too huge and sloppy and the collar never stays flat. I should have stitched it the other way so the other side showed when folded back. But silly me followed the pattern. Doh. Flat pieces. Seams. Yuck.

Anyway this dip-stitch pattern is quite interesting especially with the wrong side as the public one. It’s easy to knit too even though it doesn’t look like it. This photo shows both sides before it went bye-bye: 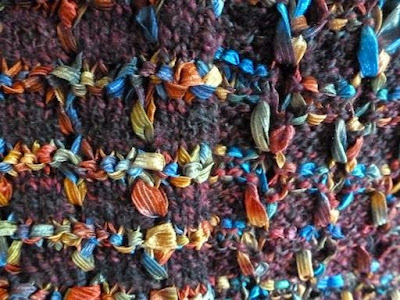 There are a few good tidbits like that in this book from 2005 but the patterns are decidedly “Knitter’s magazine style” which isn’t surprising given that it was published by XRX. You’ll know exactly what I mean if you’ve ever seen anything from them! (Though somehow they managed to skip that ubiquitous model this time. You know – the one who used to have short platinum hair and more recently has gone brunette? How did that oversight happen? Was she not available to go sailing off to Santorini for the photo shoot?)

But I digress. Back to the sweater-jacket. I picked out all the seams and am now winding the two yarns separately into balls. Later I’ll rewind into skeins and wash them to straighten out the kinks and clean them up. I know – I could have just chucked this in the thrift bin but, hey, my handspun is worth saving! I’d like to use it in a new sweater but I’m not sure yet if I have enough for the one I have in mind. We shall see. There’s a lot of ribbon yarn here too (Lion Brand Incredible, colourway Copper Penny) but I have no idea what to use it for even though it has very pretty colours.

And even more frogging happened when I sadly gave up on the tea cosy I was making for Milady Daughter: 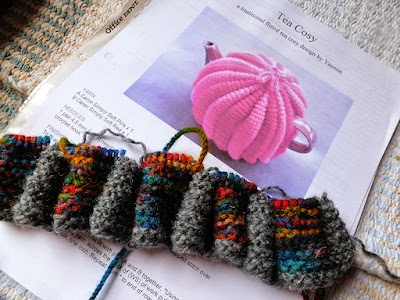 I was liking the multicolour and bluish-grey together very much but the knitting of this was killing my poor overworked hands. To make the corrugated texture you have to pull up tightly on the yarn float when you switch colours.The whole thing ended up being under some tension and even though I experimented with needles, nothing made it slide or knit any easier. Maybe the trick is to use softer yarn instead of the good sturdy wool. Dunno. I was definitely avoiding working on it and didn’t get far before I called it quits. I have another pattern in mind now but I need different yarn as well. It calls for a bulky yarn and I don’t think I have anything suitable in stash. BTW, I discovered this pattern while I was heaving all those knitting books around on the floor.

Obviously I still haven’t gotten back into sewing yet. My cutting table is covered in yarns to be skeined instead. The garden is down to the basics of picking, watering and weeding so it’s much less work now. The weather has been warmish but cloudy so it hasn’t really needed too much watering yet. Somebody has been snipping the tops off my beans just as they come up. Squirrels, crows, something else? They aren’t eating them just decapitating so I put some of my fine black netting strips over them to see if that discourages the Red Queen (“off with their heads!”) wannabe. It works for the peas so it should work for the beans too. Sheesh. Can’t anything just grow happily unmolested? Guess not.

I’m currently knitting on my Alpaca Tweed Cardi based on the Larch Cardigan by Amy Christoffers while rereading Indigo: Egyptian Mummies to Blue Jeans by Jenny Balfour-Paul. The second time through the historical and cultural information makes a lot more sense to me now that I’ve had more experience with several kinds of indigo and made different types of vats. My original hardcover copy of the book is personally signed by the author! However there’s a new updated paperback edition of this book now available. I also discovered an interesting interview with Jenny here. As well, I’ve been listening to podcasts while ripping out my old knitting and winding skeins. Current faves are KnitBritish, pomcast and woolful. Off to do some more now.

I think your tunic is fabulous and flattering. Good job! And I thought I was the only one who didn't like "Knitter's" style. What is it with them? How do they survive? And Jenny Balfour_Paul's book is lovely - mine is autographed too. Were you there when she gave that lecture at Maiwa where she had laryngitis and had to whisper into the mike? It felt so intimate!

Thanks for the kind words, Heather! Yes, I think that was when I got Jenny's book. You're right - I'd forgotten about the voice thing. You mean we were in the same place at the same time and never met? Sheesh.