Yup, I finally finished the French Vintage Housedress (Marcy Tilton’s V8813). It came out OK but not without a few birth pains. When last I posted I was complaining that I had made a couple of mistakes in the sewing. It turned out that I only sewed one seam together wrong because the pattern instruction illustrations were incorrect! Steps 5 and 6 show the back corners of pocket linings matching up with the across-back seam. They don’t. They stop lower down on the body. The other steps are correct though. Whew! For a minute there I thought I had put the pocket linings on wrong but I didn’t. Ah, the interesting complications of a Tilton pattern! They are never straightforward. But I guess that’s why I like the results so much.

I did the shirring on the front piece before I sewed it to the rest of the dress, not after as the instructions would have it. I forgot to do the centre dart first too but it worked out just fine when I stitched it after I zigzagged over the cord but before I sewed the two rows of stabilising stitches on either side. My cording technique that I mentioned last post worked perfectly. Here’s the machine set-up: 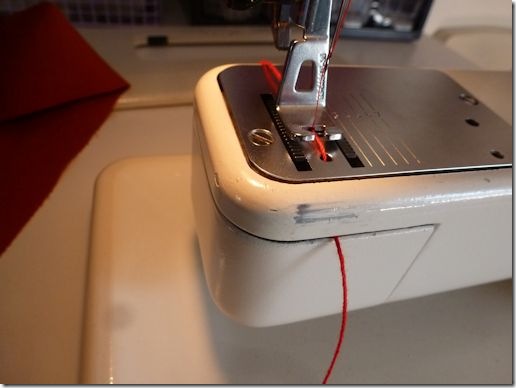 Note those scratches on the arm are caused by putting on and taking off the extension table (seen behind the machine) many many times over the last 37 years! I left it off for this technique. And here’s what the back of the shirring looked like after the two rows of stabilising stitches, photo taken as I was serging the seams: 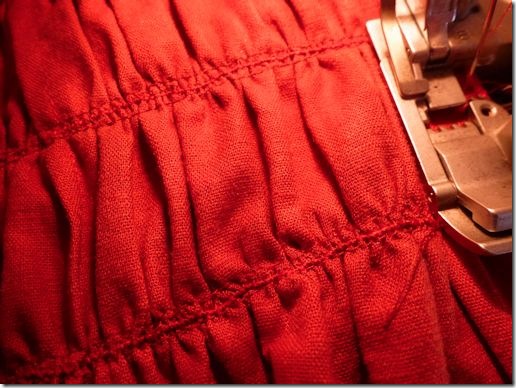 A little wobbly but not bad. I also added an extra row of shirring below the other three because of my low bust line. It turned out that I didn’t need to add extra to the neckline V but I did need to take a slightly deeper dart which had the same effect of raising the neckline a little. I also needed to take in the sleeves and underarm seam about 5/8” tapering to nothing just below the across-back seam. The kimono sleeves were too wide for my skinny arms and caused bra-flashing. Now they’re much better.

Otherwise I sewed a straight size medium which fit just fine. I didn’t even need to adjust the shirring at all. For the pockets I found 2 big plastic buttons in the right colour that have been in the stash forever. Always nice to finally find a use for things, huh? This dress is maybe just a little unflattering in its silhouette for my body but it’s very comfortable so I don’t really mind. Another garment in bright orange-red! Notice I have orange shoes to wear with it. 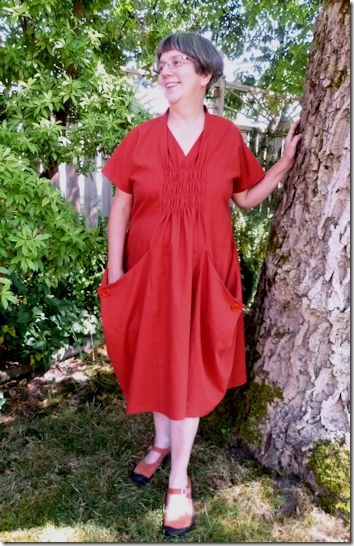 What’s next in the queue? Well, right now sewing is on hold for a week. We’re off on a fambly camping trip to Manning Park. We’re bringing Nana, Thom’s 87-year-old mom, too though she’s not actually camping but will be sleeping in a nice bed at the lodge. This year will be a slightly smaller collection of fambly – only 10 of us – but it’ll be fun. The weather promises to be perfect and there’s a campfire ban. Yay! No smoke! We have to come back home with Nana on Sunday night but it’ll give us a chance to water everything. Again. Then we’ll be going back on Tuesday for a few more days.

Luckily Manning is only about 3 hours drive and the old VW Westie is running very nicely these days. (Oops, hope I haven’t jinxed it.) Speaking of traveling we’re already planning our usual big September trip. This year we’re heading for Pike’s Peak! I’m already queuing up the knitting projects.

The garden is still producing nicely although the salad greens and peas are done. There’s lots of zucchinis and pattypan squashes, cucumbers and beans, beans, and more beans. No tomatoes ripe yet. I’ve been steadily picking flowers in the dye garden to dry: 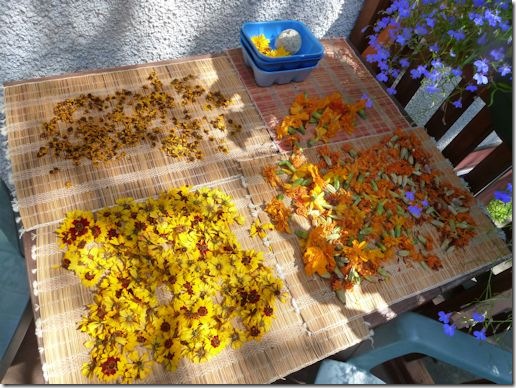 You can imagine what my fingernails look like right now! I ended up putting the marigolds in the freezer as usual because they just don’t dry well for me. The perennial coreopsis aren’t particularly prolific bloomers but the dyer’s coreopsis just gives and gives. I pick the equivalent of that pile on the left nearly every day! However I do hope to have enough perennial coreopsis flowers to at least have one little trial dyebath though. Oh and the weld that I grew this year for fresh seeds (even though I don’t need any weld right now) has decided that three of them are biennials and are waiting until next year to bloom but the fourth is throwing up a seed stalk now. Silly thing. The Japanese indigo is finally doing better. I think it just needed time and more water. I still hope to get one harvest/dye day in a few weeks.

Not much else exciting going on right now – apart from the 40+ Blogger Meetup a week from tomorrow and for which I will be sure to be home in time. Can’t miss meeting all those lovely women! Summer is speeding by and of course I’m not getting half of what I planned done. Oh well. It was just too hot and now that the temps have returned to normal we won’t be home. Never mind. Things will wait or other things will take priority. I’m not going to stress. At least I’m never bored!

what a fantastic cording application method!

my coreopsis takes forever to collect--the whole summer in fact, but as with you, the dyers chamomile just keeps on ticking

Very cool dress! And it looks nice and summer-y on you. Have fun camping!

Aha!! Let there be color. I don't think it's unflattering at all. Looks very cool, comfortable & bright for summer. I approve. In fact, I love it.

Thanks for your kind comments, my dears! Yes, we are back from the wilds. It was exhausting but fun.