Oh man! This has been a wild and wonderful week! Driving, camping, family, heat, cold, fish, rain, corn, bloggers, public transit and a whole lot else. Do let me elaborate. It might take a couple of posts to catch up.

First there was the Fambly Campout in Manning Provincial Park. We drove in with Nana (Thom’s mom) and enjoyed the first weekend sharing a couple of campsites at Lightning Lake. Nana had a comfy room in the lodge but spent her days with all of us: two of her three sons, two daughters-in-law (including me), and a couple of grandchildren plus significant others and, of course, one great grandchild, Our Little Miss Rosebud (who’s real name is kept off the interwebs but she’ll introduce herself to all and sundry in person). It’s amazing how one four-year-old can wear out all nine adults! 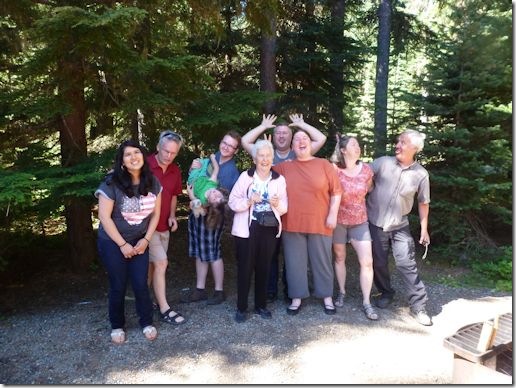 (Sorry I’m the only one not in this photo since I was taking it.)

The weather was lovely, the bugs were (mostly) insignificant, the company delightful and the campout successful. That Sunday we drove Nana back home, Thom’s younger brother and his wife carried on further with their summer vacation, their son and his girlfriend went home and our daughter and her family stayed on. We stayed home one day to water the garden, wash clothes and re-pack and were back up in Manning Park by Tuesday for another four days of camping with our daughter’s family.

On the way back we stopped just outside Hope to explore the Othello Tunnels. 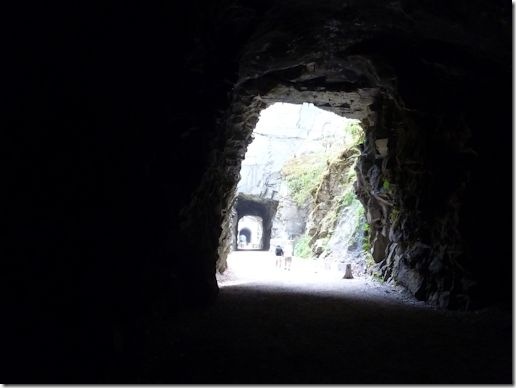 This series of railway tunnels had been dug (and blasted) out to accommodate the Kettle Valley Railway through a very narrow canyon back in the early part of the 20th Century. 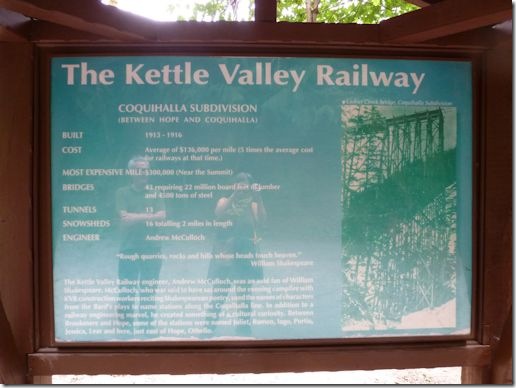 (See us in the reflection? I love that.)

The railway line was decommissioned in the 1950’s due to unprofitable upkeep expenses: avalanches, rock falls and the like. Now it’s a trail system and the tunnels were very popular with visitors while we were there. It was hard to get photos without a dozen random people cluttering up the view! There’s only one original trestle left in this series but replacement bridges for pedestrians and bicycles have been built instead over the Coquihalla River. Only one tunnel is at all dark inside and we managed without our flashlights though it did remind us of some of the lava tubes we’ve explored. We had a lovely walk.

When we got back to Manning Park the weather was somewhat cooler but still lovely. The fisher-persons (Thom and our daughter with the assistance of the littlest grandbeastie) caught two rainbow trout which we ate for dinner Saturday night! (Yum.) 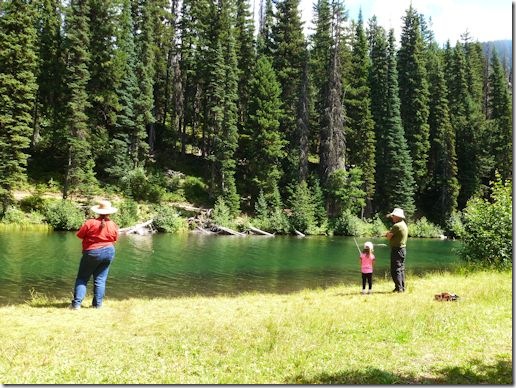 (So lovely! Now I want to go back again…)

Each night we experienced the wonderful world of the Park Nature Programmes – totally hilarious, especially with Rosebud wanting to participate in everything! She actually did pretty well for a pre-schooler and even asked a few relevant questions. She got to be a moth (for the bat to eat), a wolf (dominant – ears up! or submissive – ears down!) plus a pika and a hawk. Fun! And we all learned a few new things about the park and its inhabitants.

However, grumble… I managed to take a tumble on the second trip and not only broke a plate and a pot handle (I was carrying the clean dishes back to our Westie) but also managed to damage my eyeglasses. So now I have to see if they can repair the nosepiece and make the lens stay in better. It’ll be a few months before I can afford to replace them. Unfortunately progressive lenses are not a dime a dozen. More like $700 for one single pair. Ouch. Meanwhile I’m wearing them anyhow. The good news is that I didn’t really hurt myself much apart from needing a couple of Disney Princess bandaids on my skinned knee but my arthritic hip actually improved afterward. Go figure.

Then we drove home on Friday yet again in a delightful rainstorm. Yeah, I know, but it’s been quite awhile since it rained good and proper! I was so happy that I didn’t have to spend time watering the garden again. It’ll help all the grass and trees too since we’re now on Level 3 watering restrictions which includes no lawn watering at all. We stopped in Chilliwack for some of its famous corn. To go with the trout of course.

Next instalment of the week’s saga coming up. Stay tuned.