A Marathon of Making

Whew! I’ve been on a rather insane kick of making stuff before we head off on our Annual Trek. Less than two weeks to go! So much to do. No lazy summer days for this damselfly.

In the studio I prepped a bunch of patterns and cut out 10 garments. And now I’m attempting to sew them in groups of like colours so I can save time changing threads in the serger and sewing machine. I have no idea whether or not I’ll be able to finish the pile (and cut out a couple more that I’d like to get done too!) in time. But I’m going to get as far as I can before I have to start packing and cleaning the house for our house sitters.

I’ve finished 3 pieces so far: tights (Marcy Tilton’s V9108 View D), Katherine Tilton’s top (B5925 View A), and my own TNTee. The fabric is a thin bamboo-rayon/lycra knit in pumpkin orange and medium gray. Here’s a rather bad photo of the first two worn together: 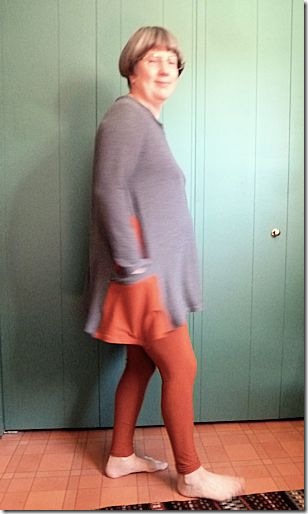 I was moving around too much for the low light situation so it’s a bit blurry. Looks like pajamas, doesn’t it? Feels like it too! Perhaps I won’t wear these pieces together out of the house. Heh. This is the first of the Battle of the Leggings Patterns and although the size M fit well at the top, I needed to take the leg seams in by morphing between the M at the crotch to the XS from the knee down to accommodate my chicken legs. Plus I added 2” to the waist height and subtracted 2” from the length. The waist sits where I like it but as you can see I probably could take another inch off the hems where they bag. And these tights are only mid-calf length on the pattern models! They are eleventy-feet tall, right? Either that or I’m even shorter than I thought.

The top was adjusted at the shoulder, armhole and sleeve cap as I mentioned in the last post. Fits me perfectly! However some reviewers mentioned that the pockets in this style tend to bag oddly. Yes, they do! And there’s no way to solve that unless I put buttons or something to hold them up. I think it would show less in a print but it doesn’t really bother me that much. Just another funky thing to go with the twisted neckline and pocket hems.

The last garment I sewed (also in the gray bamboo) was my TNTee that I used to adjust this with so it fits exactly the same in those areas. I lengthened the body to just past crotch level and made 3/4-length sleeves. For the first time I tried Katherine Tilton’s single-layer wrap-around binding method for the neckline finish. It’s described in the Knits for Real People book and demonstrated on their T-Shirt Craftsy class. Mine came out a little looser than I’d like but acceptable. Sorry I haven’t photographed this simple long tee yet.

Sewing the bamboo/lycra was like herding cats! It’s soooo stretchy that it’s hard to get a seam that doesn’t ripple or pop especially on the cross-grain. I got better at handling it towards the end of the last of the 3 projects. It figures, eh? I still have a little of each left which will eventually become undies. But on to the next sewing project.

As well as the marathon sewing I hosted my Spectrum Study Group for another indigo dye day last week. Bonnie brought a beautiful indigo dye stock that she made for us: 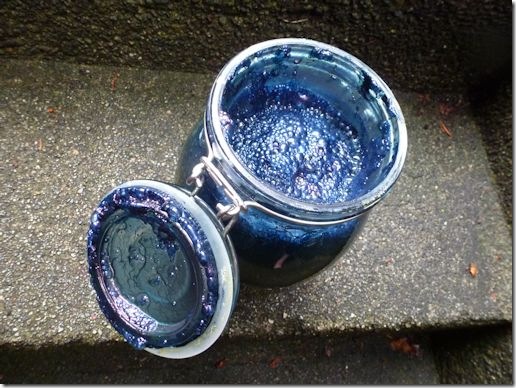 Isn’t it pretty? This is the Michel Garcia 123 Vat, in this case 75g natural indigo/150g calcium hydroxide (aka calx or cal)/225g fructose. It’s an easy and forgiving vat and we dyed a bunch of things in it: 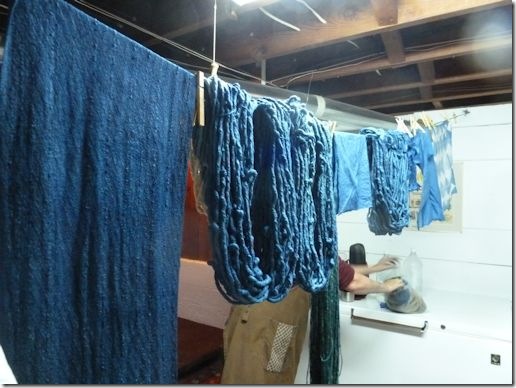 These are just a few of them. I also picked and processed my Japanese indigo from my garden: 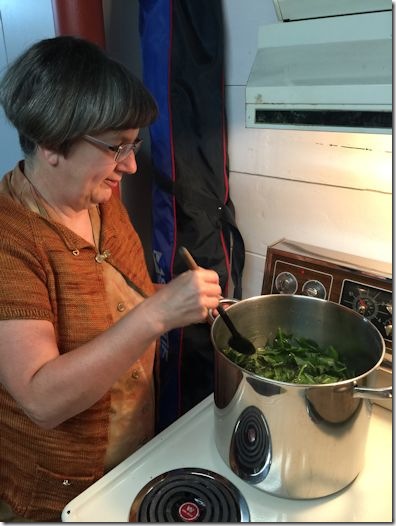 In spite of all the trials and tribulations the poor indigo went through this year it still gave a pretty excellent blue: 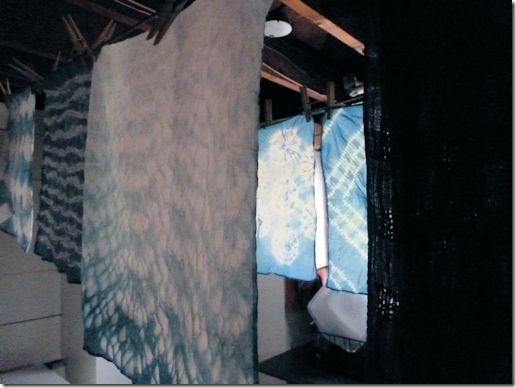 These are my new batch of shibori hankies. I’ll show them better when they’ve been scoured properly. You can’t see the last one, a mokume moon, behind the shawl (which looks darker than it really is). The shawl was one that I had originally dyed in woad but since I had two of them, I thought this one could use more indigo. As did the rayon Amiga Sweater that I had dyed in Japanese indigo. It’s now several shades darker too.

The shawl and the sweater were dyed the next day in the 123 vat. All I did to revive it was to heat the vat to 50C/120F then add a heaping spoonful of fructose and wait for 20 minutes or so and it was ready to go. There was plenty of blue left, even after the mad dyeing from the day before, so I gave things at least 3 dips to darken them up. The advantages of this type of vat are many including the fact that it’s gentle enough for wool and silk. It’s my new favourite method and you can bet I’ll be making it again.

So what else? I finished the Periwinkle Cami but no photos yet. What can I say? It’s been raining a little on and off (yay!) and the squirrels are covering my deck and everything else in the vicinity (boo!) with bits of my walnuts. You can’t even walk out there without risk of getting beaned on the head by a flying walnut! Not particularly conducive to photo shoots. I had a wee problem with the bright periwinkle rayon yarn. When I washed the sweater to block it quite a lot of colour ran into the water. I thought I got most of the fugitive dye out but as it dried the colour pooled on the top of the gathers at the front and back yokes. So I washed it again, this time in Synthrapol which helps to free up the fugitive dye molecules. The variegation is still a little visible but much less than it was. Probably I should have simmered the whole thing in Synthrapol for at least 10 minutes and I may still do that next time it needs washing and see if it helps. Since it takes at least 2 days to dry each time, I deem it’s OK for now. I’ll try to get a photo for next time.

Also in knitting news, I’m at the point where I divide for the sleeves and body on my Blackberry Amiga Cardi using recycled handspun wool. It seems to be going well but I won’t know for sure for awhile yet. Next I need to consolidate all my knitting projects for travel very soon.

Time to go sew again! I need to crank out at least one garment a day to be done by my self-imposed deadline. I may wear out first! Not like I don’t have any clothes to take camping with me but it’s nice to have some new things. Carrying on…

Oh my, I'm exhausted just reading about all you're doing Louisa! A garment a day?! I thought I was cooking doing one a week. What a slacker I am. ooo, I luv all that indigo dying too. Can't wait to see it up close. And it's just gonna be hankies?! Well, you're certainly going to look smashing at Pike's Peak. Perhaps you can relax on the way there. Right.

Yeah, I exhausted me too! I'm just a bit (OK, a lot) obsessed with sewing things up right now. You are NOT a slacker, Pao! You are amazing and totally make lots of wonderful things. I'm just being the hare right now instead of the tortoise because shortly I won't have access to my sewing machine for more than a month. And yes, I can relax and knit as we drive. As long as I pay attention to where we are. After all, I'm the GPS!

I'm so impressed by your dyeing, Louisa! Incredible amount of work (from the plant, even!) just boggles my mind.

Thank you so much for the education about crocking - I'd guessed what it meant from the label, but have never heard that term ever used outside these two specific clothing labels.

I bought frutcose with the intention of trying the 123 method, with your enthusiasm I will get on with it. I dried the first indigo cutting hoping to get a good second cut but it is not looking any happier - what a strange year!

You're quite welcome, Sheila! Hoping not to come off like a know-it-all. Heh.

And yes, Jean, it's been a very odd year for the garden! All I'm hoping for my indigo now is to get seeds for next year and hope it does better. You'll have to tell me how you dye with the dried leaves since I've never tried that.

I am a fan of wearing pajamas all day long...in and out of the house! Life is too short to wear uncomfortable clothes. And aren't you brilliant to sew in similar colors to avoid changing thread?! What an amazing workshop!

Thanks for your kind comments, Connie. You could have referred to it as a sweatshop - it's certainly been hot enough up there! I'm just grateful my sewing machine hasn't overheated even though I sure have.