Today I’m going to start on the knitting FOs that I did on the trip. There’s quite a few of them so it’ll probably take 2 posts to get them all. Of course you could always go look at my Ravelry projects right now but where’s the fun in that? Heh. I like having them here as well as on paper and in Ravelry but I think I’ll continue with a more informal way of presenting my makes than I have done in the past. It’s easier! If you want more details I’ll include the Rav link.

The first thing I finished on our travels was one that I had started before we left, the Black Raspberry Amiga: 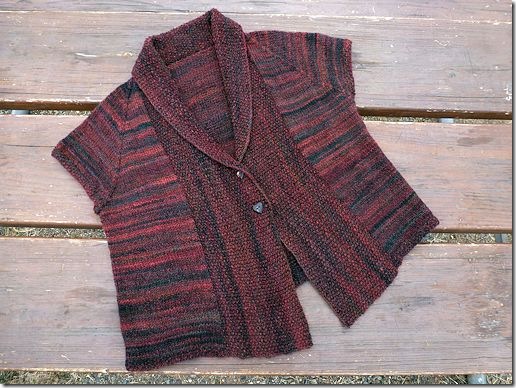 Here it is blocking on the picnic table at our campsite in Lewis & Clark Caverns State Park, Montana. It doesn’t look at all like my first Amiga which was knit in rayon slub weaving yarn and dyed in indigo! This version has cap sleeves and seed stitch on the borders and collar which lies nice and flat. This pattern by Mags Kandis (from Knitty Spring + Summer 2011) is easy to knit and very adaptable.

The yarn is handspun 2-ply semi-worsted in a sport weight and has already been a sweater and a half, both frogged, before it became this one. Third time’s the charm! The true colours are a little brighter than the photo shows and include shades of red, black, tan and a very dark green. The buttons are carved bone hearts from Maiwa.

I knit a size Large hoping to achieve a Medium because my gauge was off but it ended up just a wee bit wider than I was aiming for anyhow. It’s still a lovely little rib-cover when I just need a bit of extra warmth and the high collar means I don’t need to wear a scarf with it. However I’m going to have to stitch the buttonholes to snug them up because the buttons keep threatening to pop open. The double-yarn-over in seed stitch is surprisingly looser than it would have been in stockinette. That’s true of seed stitch in general – on the same number of stitches and rows, it’s both wider and shorter than stockinette. You can see in the photo where the collar/borders are somewhat longer than the stockinette body even though I went down a needle size to knit that part. And I had to knit many more rows to get the width I wanted.

Even though it’s a bit more swingy than close-fitting I’m very happy with this little sweater. There’s an obvious reason why Ravelers have knit almost 1500 of them from this pattern! It’s a keeper.

I’m going to save the alpaca tweed collection for the next post so I’ll skip over to the Hakusa Wannabe: 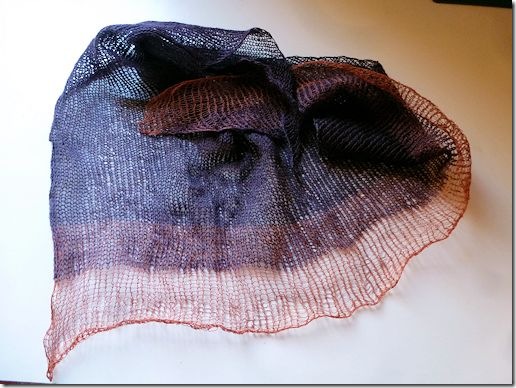 With no Internet connection on the road, I didn’t have the original Hakusa pattern (a paid pattern by Kirsten Johnstone) so I faked it. I’ve loved purple and orange since I was a teenager so I used Habu stainless steel/silk yarn in brick and violet and some fine 2/26 wool yarn in purple. It’s a lovely little scarf and I really like the way the steel/silk yarn holds the stitches like a netting. I pulled hem into shape and actually blocked it quite hard into its wonky triangle. After that first treatment though it pretty much tends to reshape itself in its own way.

So I’m ending up with some leftovers of various colours of this Habu yarn now. None of them are enough for a project by themselves. I may have to weave something stripy when I have enough. My local source, the Silk Weaving Studio, has a new order coming in in a couple of weeks so I may be tempted to replenish the stock. It’s such fun to knit with and the results are always surprising. Maybe something like Julie Weisenberger’s Stella? 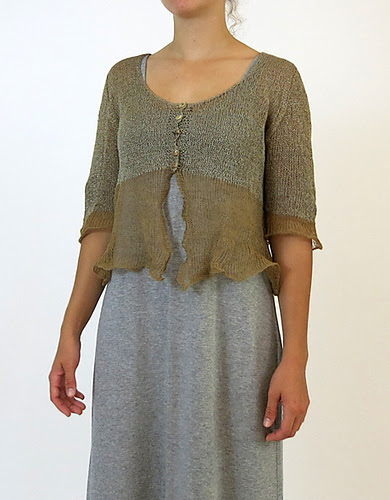 Though this version uses steel/wool instead of steel/silk and a lot of it! Plus some cotton gima. Might be fun with hanji paper yarn instead like my Shippo Tail Scarf. But I’d have to modify or come up with my own pattern because the hanji is quite thick compared to the gima. I’ll think on it.

Meanwhile, I have one more FO for today, Socks Naturally: 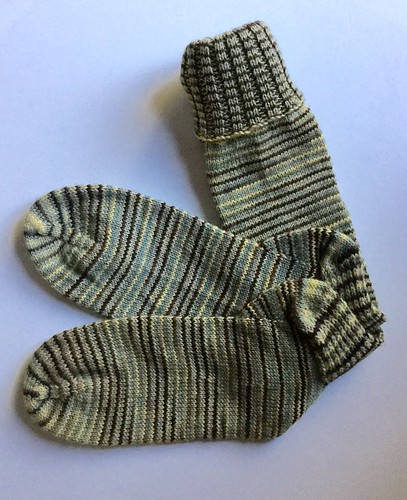 This was my first photo taken with Corbie, the iPad Mini 4, and the colours are a little cooler than they should be. Not really Corbie’s fault though – the light was poor! And I’m just learning the photo editing options in iOS 9. Funstuff.

I used the yarn that I dyed in gardenia pods (yellow), walnut husks (brown) and Japanese indigo (blue over the yellow making green). The superwash wool and nylon dyes really well but the gardenia did fade somewhat after all the other dye processes on top. I really like how the stripes turned out! The pattern is again a slightly modified version of Wendy Johnson’s free Toe-Up Socks With A Difference. It’s now my go-to toe-up because I love how they fit my feet though they look a little odd just sitting there flat. Plus I can use up all the yarn and make tall socks with a fold-over cuff that will show over the top of my Blundstone boots.

I’ll leave it there for now. I hear the garden calling to me. Back soon with Part The Second.

More Color!!! And I think this is the nicest Amiga I've seen. I didn't like this pattern when I first saw it & liked it even less when one of my knitting friends made one. I thought it looked frumpy & shapeless. BUT, what a difference the variegated handspun makes!! And the seed stitch!! WOW. Not a fan of the steel-wool yarns as clothing but can see potential as hats or 'Art' pieces. And I do like the sock color. Socks are so much fun.

Thanks! Hah! I'm picturing a steel wool sweater and this stuff is not at all like that. Besides mine is steel wrapped in silk. Quite yummy actually.