Here we are again with the rest of the vacation knitting! If you’ll cast your mind back to earlier this year at Fibres West, I bought 500g of a blue-grey alpaca roving that turned out to be blended with merino bits. After spinning it up into a sport weight 2-ply, I knitted Amy Christoffers’ Larch Cardigan with the resulting tweedy yarn. I had lots of leftovers so I decided to make some matching accessories.

There was the shawl, Grey Dragonfly Wings: 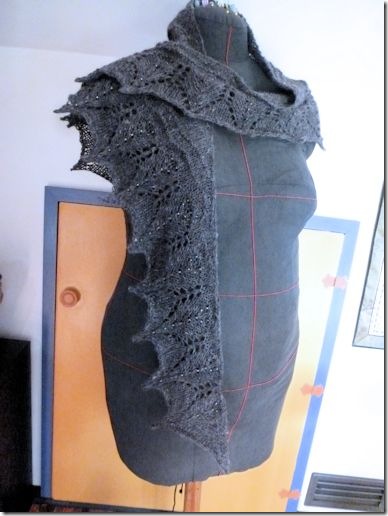 This pattern is by Boo Knits and is a free Ravelry download. How could I resist a dragonfly? (Or maybe it’s a damselfly. Heh.) The pattern was a bit unconventional and used 4 different sizes of needles. Good thing I had my trusty Addi Lace Clicks along! I also added 6/0 copper-lined grey AB beads. They just add a wee hint of sparkle: 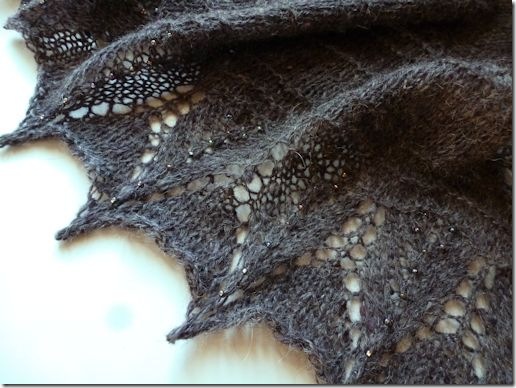 The alpaca still sheds somewhat so I hope it isn’t too annoyingly linty on my clothes. I didn’t have my blocking tools with me in the Westie so that finishing step had to wait until I got home.

Next I wanted a beret but forgot to bring the pattern I was planning to use. However, there were a number of patterns already on my netbook computer so I picked one, Beret Easy by Aileen Cahill, another free Ravelry download. I was also limited in the needles that I brought along so I was glad this pattern worked for any size yarn and needles. You just work to measurements and the results are this Grey Alpaca Tweed Beret: 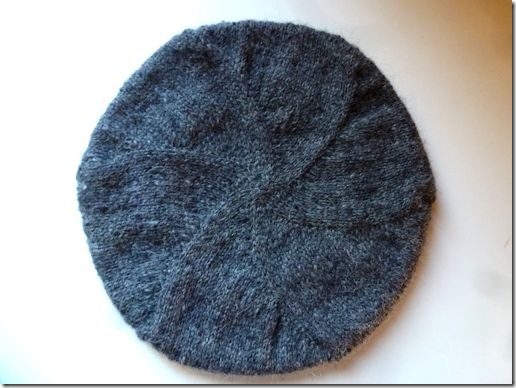 Unfortunately, even though I knitted it slightly smaller than the instructions stated, it’s still quite large for my pinhead. I prefer a fairly small beret circumference of about 10” or even less and this one is more like 11.5”. The drawback of measuring your knitting before it’s blocked! Luckily I have enough of this yarn left over to make another so I’ll probably give this one away.

The cool thing I learned while starting this hat is the small-circle magic cast-on. It’s really easy and doesn’t leave a hole in the middle. This technique is going in my knitting repertoire for sure.

Lastly I made a pair of Grey Alpaca Tweed Fingerless Mitts: 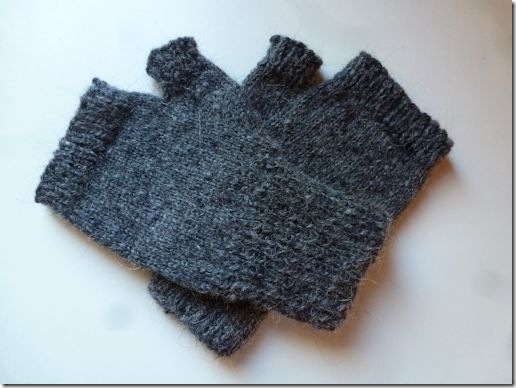 Again, I needed a pattern that was already on my computer so I used Gloves Up by Ydun. It’s yet another free Ravelry pattern and was very easy to convert to fingerless. I just ended the thumb and palm with ribbing instead of completing the fingers. I think they’ll be very useful when the weather gets cold.

So far though, it’s been pretty nice around here! No major woollies needed. There’s been some rain, just enough to water my fall rye seeds when they were getting too dry. The veggie garden is pretty much all done for the winter now: 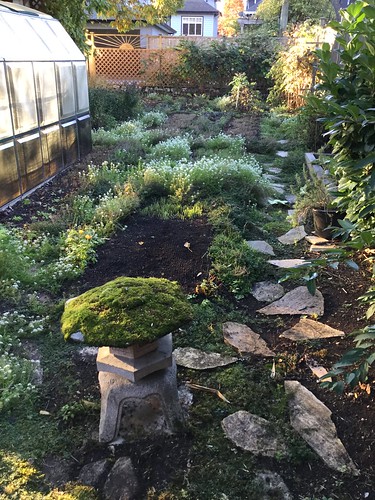 Lazy Rosie, my recumbent rosemary still has to get tucked into the greenhouse though she’s fine outside for now. And eventually the oregano will need to be pruned down but the birds are enjoying the seeds and it looks attractive still. The alyssum went nuts while we were away (it finally got enough rain) and it was so pretty that I’m leaving it for now. It’ll actually survive light frosts unless we get a really cold snap. The deck pots are all cleared and moved into the greenhouse for the winter along with the empty tomato cages. 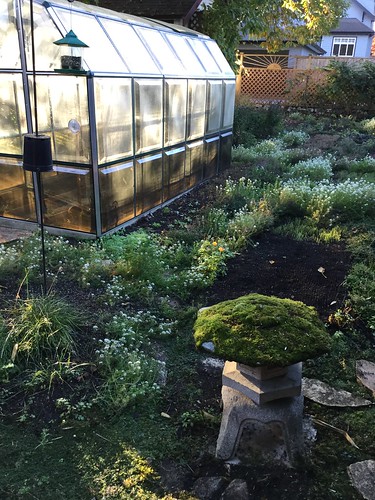 Doesn’t it look pretty in the early morning sunlight? Betcha can’t guess that I took the last 2 photos with Corbie the iPad, can you? (So much more clear.)

Veggie garden results for the very hot and dry summer of 2015:

Now I can move on to the dye garden next. I’m getting impatient to dig up the madder finally this year.

I don't think anyone's garden was really good this year unless it was watered by drip irrigation. I have a wild Fennel & Oregano garden which is always alive with bees every summer but it was so hot that my Runner beans failed to thrive until the end of the summer after the darned bees went to bed. The Everbearing Strawberries did okay as usual but everything else, including my ferns just waited until the heat was over. There's always next year, I guess.