Hello my darlings! I know everyone (including me) has been waiting for these posts for…uhm, the better part of two months. Urp. I have over 700 photos (mine) and a bunch of Thom’s as well to go through. We visited 2 provinces and 7 states, about 7500 kilometres total distance. You can imagine it feels like f o r e v e r ago that we left home. And we went through a lot of adventures since. However, cast your mind back back BACK to August 23 when we were finally on our way east and south.

Just so you know, the smoke in the title of this year’s holiday was very uncomfortably real. We experienced an ongoing miasma from forest fires for most of the first half of the trip. As I mentioned way back, our first campground reservation was cancelled due to a forest fire on August 13. Luckily we learned later that although the campers had to evacuate on foot, most of the Kettle River Recreation Area campground was saved and their equipment rescued. Restoration is ongoing. But of course we had to find an alternative. We drove for 5 hours. Smoke. We drove some more. More smoke. Popular summer holiday destinations like Osoyoos were so filled with smoke that we couldn’t breathe. The lake was invisible, the resort parking lots empty. I have no idea what the local people who couldn’t leave were doing. Hiding indoors in the AC probably. After 7+ hours of nearly non-stop driving we ended up high in the mountains at Nancy Greene Provincial Park, basically a parking lot with lake access in the subalpine area above Castlegar. Luckily it was mostly clear even if the valleys below weren’t. Hah! You think I’m just being wimpy about all the smoke stuff, don’t you? So check this out: 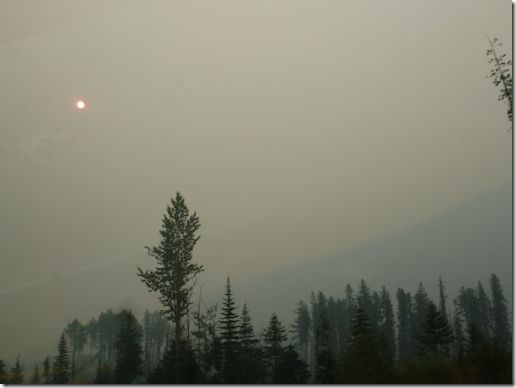 That is the next morning’s sun and that is NOT fog. It smelled like you were sitting next to the campfire. Inside the van.

However the forest fire smoke did make for some lovely sunsets. This one was our next stop, Kikomun Creek Provincial Park, almost all the way across BC: 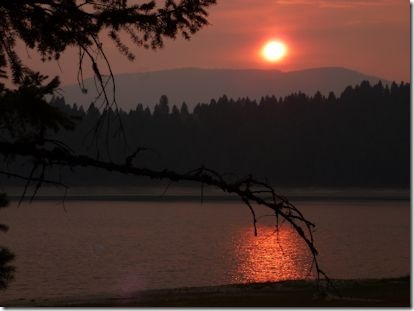 It was lucky that we moved quickly across the southernmost section of the province because the forest fires in Washington State threatened Christina Lake and Grand Forks right after we got through those areas. And no, we were not done with this situation. Next stop was Waterton Lakes National Park in Alberta where it wasn’t too bad: 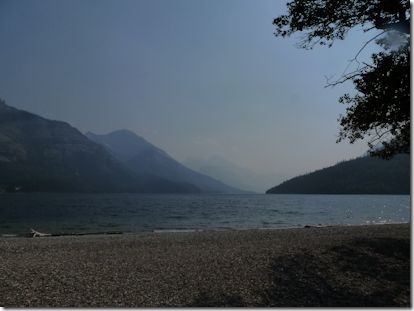 This is looking down towards Montana, where of course Glacier National Park is twin to Waterton and there were forest fires there too! After two days of relative easy breathing here we crossed the border and got a campsite (a feat in itself) in Many Glacier and guess what? Too smoky: 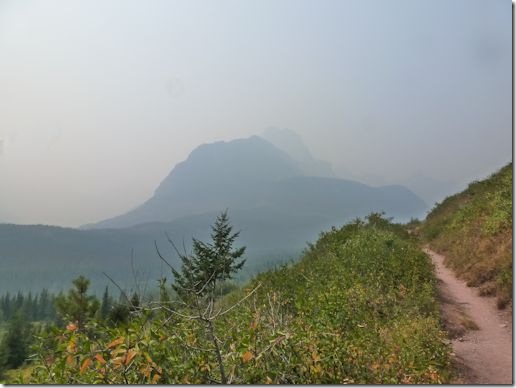 We had a really hard time hiking at altitude and breathing at the same time so after only one night we left our precious campsite and headed south to Lewis & Clark Caverns State Park. It was far enough away that finally we we could clear the smoke from our lungs for awhile. We’d already seen the caverns several times, including just last year, so we skipped the tour this time. However it made a nice stop on the way to Yellowstone National Park in Wyoming. Believe it or not, it was much nicer to smell the sulphur from the hot pools than the forest fire smoke!

This time we got to stay in Yellowstone for nearly a week. It’s a huge national park and even with more time than usual we still only did the west side. We got to see some of our favourite hot spots again. We had lots of time to be really patient and wait for several of the geysers that we hadn’t seen before. And some old friends like Grand Geyser: 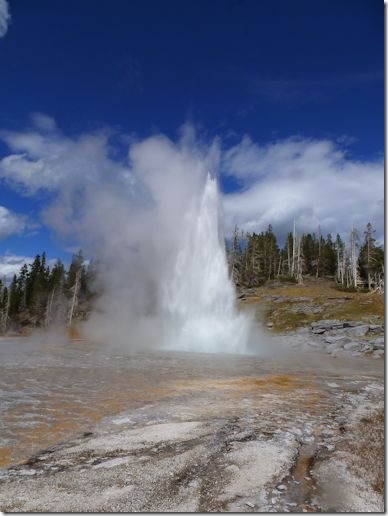 I always tell everyone that it’s far more spectacular than Old Faithful although it only goes off about twice a day. It even has 2 other geysers that go off with it: Vent and Turban. It’s very exciting! We also visited the pretty Morning Glory pool: 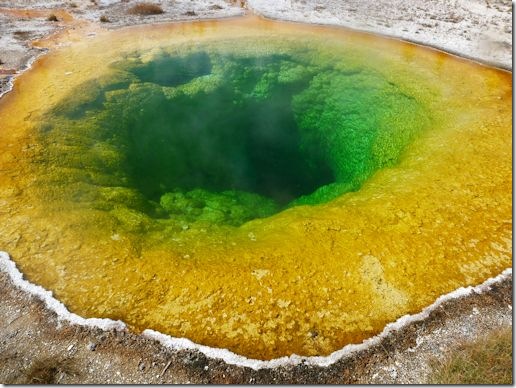 And Grand Prismatic Spring, the biggest one in the park and third largest in the world. You can’t even see the whole thing unless you fly over it! So amazing: 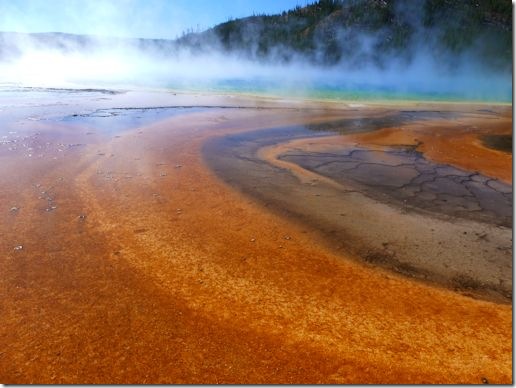 Even with my crappy camera I can’t take a bad photo in Yellowstone! Things that would usually not be considered interesting such as dead trees are beautiful here: 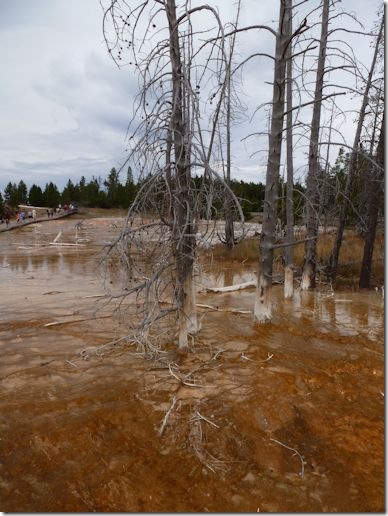 The “white socks” are caused by the mineral-laden water. These trees could have been dead for a very long time – like hundreds of years. The colours beneath the water are the bacterial mats which grow very slowly and make fabulous shapes. There are algae mats too. They all like the very hot alkaline water.

Are we having fun yet? I have more of Yellowstone to show you but I think this is a good start into the second week of the trip. A whole month to go still! Gotta pace ourselves, right?

Meanwhile back in the present time, apart from the first day after we got home when it was cloudy and misting, the weather has still been gorgeous and sunny. Makes it hard not to run away again! Instead we’ve been grocery shopping, running errands and making appointments – all the boring maintenance stuff. I got an eye test and picked out some new glasses frames to replace the ones that got damaged when I klutzed out last July in Manning Park. Just so you know, actively flinging one’s expensive progressive lenses into the gravel is not recommended. (Especially whilst flinging oneself to the ground at the same time. Ouch.) Clear vision is non-optimum when attempted through the multiple tiny divots in the plastic. Just sayin’. (Even the granddaughter’s princess band-aids sadly couldn’t help.) $600+ later…which to be fair does include new sunglasses too. An expensive accident.

I’ve also been attempting to update my Ravelry projects with all the items I finished knitting while we were away. I’ll focus on them specifically here eventually. (If you’re impatient skip over to my Rav pages.) A sweater, a shawl, a beret, a pair of fingerless mitts and most of a pair of socks. Also a part of another beret but I frogged it today and need to begin again. Too small! Even for my pinhead. Plus I’ve already washed all 6 of my new pieces of fabric from the Mill End Store in Portland. Two wools, linen, cotton, a wicking and a sweater knit. It was a rather pricey shopping spree but totally worth it I think. For US$430 I will get at least 9 or 10 garments, 2 of them earmarked for Thom. Can’t wait to get started on sewing! Photos to come.

Next part of the saga coming soon. Right now it’s bedtime and my eyes are shutting. Thom’s been trying to keep me walking a minimum of 4 kilometres per day. Yesterday’s was over 8k and today’s was around 7k. I’m done! My arthritic hip is quite improved though. Move it or lose it, right?